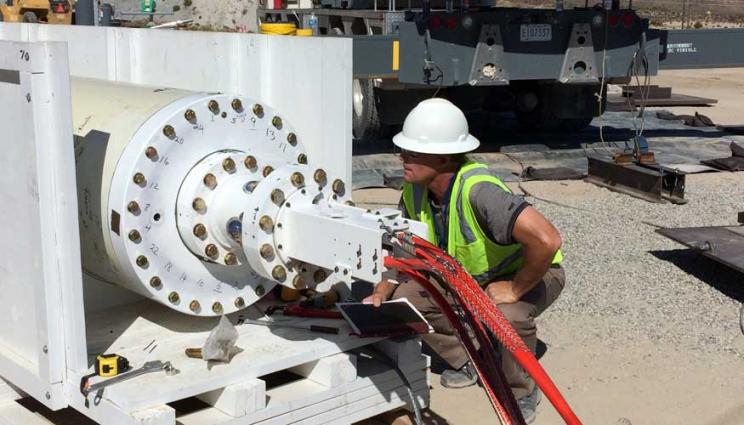 LLNL engineer Justin Jones inspects the interface between the top flange of the high explosive canister (the large diameter flange) and the electrical feedthrough spool in preparation for the Source Physics Experiment-6 test, which was conducted at the Nevada National Security Site on Oct. 12. Photo by Beth Dzenitis.

This SPE-6 test, was conducted Oct. 12 and was the last of a series of six underground, high-explosive tests conducted in a borehole in hard rock.

The SPE is a set of experiments designed to improve the United States’ ability to detect and identify low-yield nuclear explosions amid the clutter of conventional explosions and small earthquakes. SPE-6 was the shallowest of the SPE Phase I series and most similar in scaled depth of burial to the historic nuclear tests done at NNSS prior to the cessation of nuclear testing in 1992.

"By comparing SPE-6 to the previous deeper high explosive SPE tests and the nearby historic underground nuclear tests, it allows researchers to better understand the effects of depth and size on explosion-generated seismic signals," said LLNL geophysicist Bill Walter.

"This helps to advance the United States’ capability to identify and differentiate nuclear explosions from other background seismic activity, such as mining operations and natural earthquakes. It also improves our capability to monitor the globe for nuclear testing, which state or non-state actors might try to conceal in order to develop or improve their nuclear weapons," Walter said.

A multi-institutional effort, the SPE test team is comprised of scientists and engineers from LLNL, Los Alamos and Sandia national laboratories, the University of Nevada-Reno, the Air Resources Laboratory, the Desert Research Institute, and National Security Technologies (NSTec), which operates NNSS.

Coordinating the test team, with the help of SPE leadership at each institution, LLNL High Explosives (HE) Supervisor Rich Rose served as the HE operations lead, ensuring safe and effective explosive operations, including emplacement and confinement of the explosive charge, developed and cast at the China Lake Naval Weapons Center in a collaborative effort with LLNL. 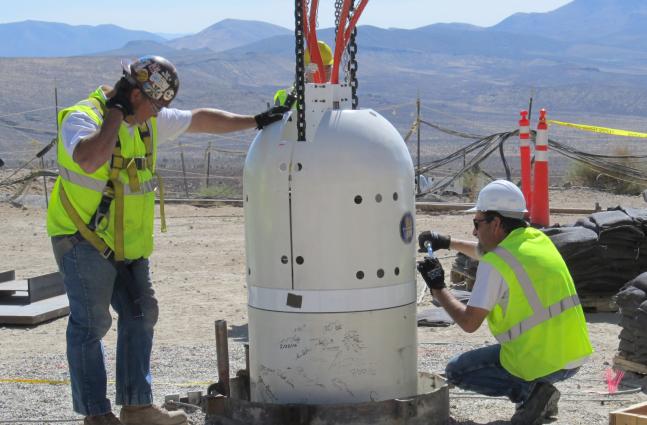 "This experiment could not have gone better," Dzenitis said. "It was conducted less than six months after SPE-5, with changes in key roles in the execution team and the addition of new diagnostics for this experiment. Each institution stepped up to provide the resources and talent needed for success."

The Oct. 12 experiment was a 2.2-ton (TNT equivalent yield) underground chemical explosion, the shallowest one among the SPE test series. It was placed 31.4 meters – or about 103 feet – deep and hit 1.6 on the Richter scale.

SPE-6 was detected at several hundred seismic stations across the Western United States, including some at distances of more than 400 kilometers.

Team scientists are using SPE-6 to develop predictable explosion seismic amplitude models to better use them to monitor for nuclear tests.

"One result from the SPE series is the demonstration that our seismic models for large explosions need to be modified when explosions are scaled to small sizes and/or the explosions are buried more deeply than most were during the days of historic nuclear testing.

"The original development of the historic seismic amplitude models relied heavily on larger explosions at standard depths of burial. The small SPE explosions, at a variety of depths and sizes and recorded on the same sensor network, have enabled the refinement of the historic P-wave models, and are providing the key data to do so. These models are important for estimating the yield of explosions and in determining the detection level of monitoring networks," Walter said.

Seismic data from the SPE explosions is shared with global monitoring researchers on the Incorporated Research Institutions for Seismology website. NNSA has published a press release on the event.

SPE-6 marks the end of Phase I of the SPE series. These six experiments were conducted in granite or "hard" rock at different depths and explosive weights.

Phase II of SPE will focus on explosions in softer, less structured rock called alluvium. These different SPE phases allow researchers to determine the generic role that geology plays in affecting seismic waves generated by underground nuclear explosions. The five explosions planned for Phase II will be conducted over the next two years.
Tags:Defense
Stephen Wampler
wampler1 [at] llnl.gov
925-423-3107

Top 10 science and technology stories of 2014