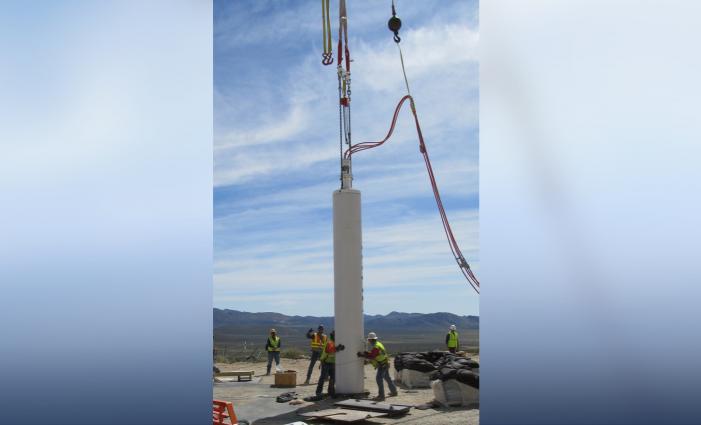 Workers at the Nevada Nuclear Security Site are shown lowering the 25-foot-long Source Physics Experiment (SPE-5) canister into the borehole to its center depth of 76.5 meters or about 250 feet.

The SPE shots, including the most recent one on April 26, consist of a series of six underground high-explosive detonations in hard rock that are designed to improve the United States’ ability to detect and identify low-yield nuclear explosions amid the clutter of conventional explosions and small earthquakes.

"Working at NNSS near the location of previous underground nuclear tests allows researchers to compare data from these conventional explosions with the nearby historic nuclear explosions," said LLNL geophysicist Bill Walter, the chief scientist for SPE-5.

"This helps to advance the United States’ capability to identify and differentiate nuclear explosions from other background seismic activity, such as mining operations and natural earthquakes. It also improves our capability to monitor the globe for nuclear testing, which state or non-state actors might try to conceal in order to develop or improve their nuclear weapons," Walter said. 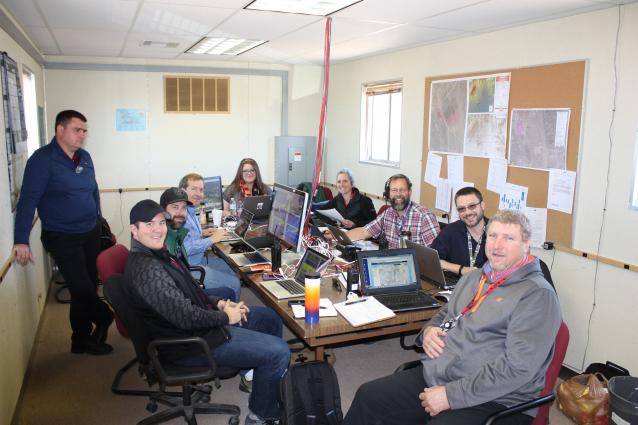 A multi-institutional effort, the SPE team is comprised of scientists and engineers from Los Alamos and Sandia national laboratories (LANL and SNL), LLNL, the University of Nevada-Reno, Weston Geophysical Corp., the Defense Threat Reduction Agency (DTRA) and National Security Technologies (NSTec), which operates the NNSS.

Berzins and Dzenitis coordinated the experimental team, with the help of the SPE leadership at each institution, and successfully executed the development effort at China Lake Naval Weapons Center, casting the largest explosive ever at that facility for SPE-5.

The April 26 experiment was a 5-ton (TNT equivalent yield) underground chemical explosion, the largest one among the SPE shots conducted thus far. It was placed 76.5 meters – or about 250 feet – deep and hit 2.0 on the Richter scale.

SPE-5 was detected at several hundred seismic stations across the western United States, including some at distances of more than 400 kilometers. Beyond seismic data, the SPE team collected data from accelerometers, acoustic and infra sound sensors, high-speed video, drone-based photogrammetry, aerial-based light detection and ranging and synthetic aperture radar.

Team scientists are using SPE-5 to develop predictable explosion S-wave models to better understand how and where they can be used to monitor for nuclear tests.

"One initial result from the SPE series is the demonstration that pre-existing fractures in hard rock, known as joints, are a source of S-waves. Granite forms as molten rock and the joints develop in preferred directions as it cools. The explosion shock wave drives motions on these joints that then radiate S-waves in complex patterns," Walter said.

Another important result from the SPE hard rock series is the demonstration that the existing explosion models for pressure waves, also known as P-waves, work poorly for small and/or over-buried explosions.

"The original development of the historic P-wave models relied heavily on larger explosions at standard depths of burial. The small SPE explosions, at a variety of depths and sizes and recorded on the same sensor network, have enabled the refinement of the historic P-wave models, and are providing the key data to do so. These models are important for estimating the yield of explosions and in determining the detection level of monitoring networks," Walter said.

Seismic data from the SPE explosions are now shared with global monitoring researchers on the Incorporated Research Institutions for Seismology website.

NNSA has published a press release on the event.

The concluding shot in the in initial SPE series, SPE-6, is slated to be staged late this summer or early fall at NNSS.