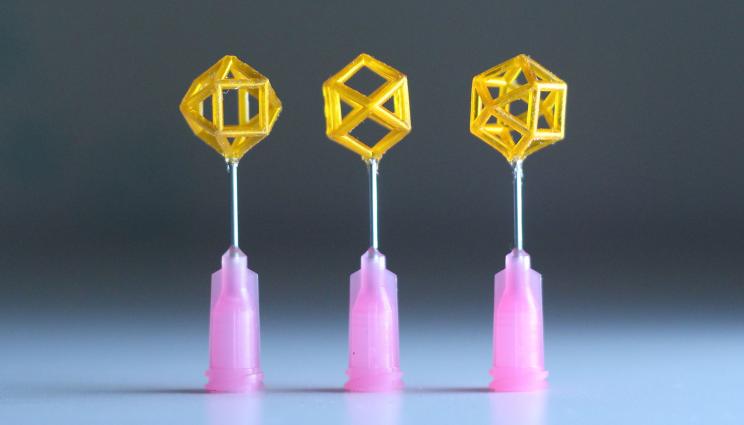 A new class of Lab-developed “field-responsive mechanical metamaterials” (FRMMs) employ a viscous, magnetically responsive fluid that is manually injected into the hollow struts and beams of 3D-printed lattices. The fluid’s ferromagnetic particles located in the core of the beams form chains in response to the magnetic field, which rapidly stiffens the fluid and the lattice structure. Photos by Julie Mancini/LLNL

Lawrence Livermore National Laboratory (LLNL) researchers have introduced a new class of metamaterials that can nearly instantly respond and stiffen 3D-printed structures when exposed to a magnetic field, a development that could be applied to next-generation helmets, wearable armor and a host of other innovations.

The Lab-developed "field-responsive mechanical metamaterials" (FRMMs) employ a viscous, magnetically responsive fluid that is manually injected into the hollow struts and beams of 3D-printed lattices. Unlike other shape morphing or so-called "4D-printed" materials (the fourth dimension being time), the overall structure of the FRMMs does not change. The fluid’s ferromagnetic particles located in the core of the beams form chains in response to the magnetic field, which stiffens the fluid and the lattice structure as a result. This response happens rapidly — in less than a second. The research appears on the cover of the journal Science Advances, published online today. 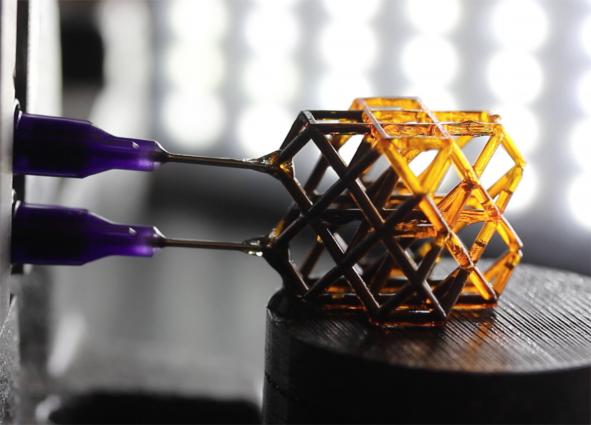 "In this paper we really wanted to focus on the new concept of metamaterials with tunable properties, and even though it’s a little more of a manual fabrication process, it still highlights what can be done, and that’s what I think is really exciting," said lead author Julie Jackson Mancini, an LLNL engineer who has worked on the project since 2014. "It’s been shown that through structure, metamaterials can create mechanical properties that sometimes don’t exist in nature or can be highly designed, but once you build the structure you’re stuck with those properties. A next evolution of these metamaterials is something that can adapt its mechanical properties in response to an external stimulus. Those exist, but they respond by changing shape or color and the time it takes to get a response can be on the order of minutes or hours. With our FRMM’s, the overall form doesn’t change and the response is very quick, which sets it apart from these other materials."

Researchers injected a magnetorheological (MR) fluid into hollow lattice structures built on LLNL’s Large Area Projection Microstereolithography (LAPµSL) platform, which 3D prints objects with microscale features over wide areas using light and a photosensitive polymer resin. The new form of dynamically tunable metamaterial owes a lot of its success to the LAPµSL machine, Mancini said, because the complex tubular lattice structures had to be manufactured with thin walls relative the overall size of the structure, and capable of keeping the fluid contained while withstanding the pressure generated during the infill process and the response to a magnetic field.

Once the magnetically responsive fluid is inside the lattice structures, applying an external magnetic field causes the fluid to stiffen and the overall 3D-printed structures subsequently stiffen almost instantaneously. The change is easily reversible and highly tunable by varying the strength of the applied magnetic field, researchers said.

"What’s really important is it’s not just an on and off response, by adjusting the magnetic field strength applied we can get a wide range of mechanical properties," Mancini said. "The idea of on-the-fly, remote tunability opens the door to a lot of applications."

Mancini said the technology could be useful for impact absorption — for example, automotive seats could have fluid-responsive metamaterials integrated inside along with sensors to detect a crash, and seats would stiffen on impact, potentially reducing passenger motion that can cause whiplash. It also could be applied to next-generation helmets or neck braces, housing for optical components and soft robotics, among many other applications.

Starting with a model he developed at LLNL to predict the mechanical properties of non-tunable static lattice-structured materials, Messner added a representation of how MR fluid affects a single lattice member under a magnetic field and incorporated the model of a single strut into designs for unit cells and lattices. From there he was able to calibrate the model to experiments Mancini performed on fluid-filled tubes similar to the struts in the lattices. The team used the model to optimize the topology of the lattice, finding the structures that would result in large changes in mechanical properties as the magnetic field was varied.

"We looked at elastic stiffness, but the model (or similar models) can be used to optimize different lattice structures for different sorts of goals," Messner said. "The design space of possible lattice structures is huge, so the model and the optimization process helped us choose likely structures with favorable properties before (Mancini) printed, filled and tested the actual specimens, which is a lengthy process."

Mancini began the work at the University of California, Davis under her adviser, materials and engineering professor Ken Loh, who is now at the University of California, San Diego. Loh said the concept was partly inspired by automotive-based suspension systems and started out by looking at ways to develop flexible armor capable of morphing or changing its mechanical properties as needed.

"One of the criteria is to achieve fast response, and magnetic fields and MR materials offer that capability," Loh said.

Loh said researchers will look into new ways to develop a single-phase material, instead of having a liquid embedded in solid, and higher performance-to-weight ratios, adding that future work "could lead to new technologies, such as flexible armor for the warfighter that stiffen instantaneously when a threat is detected."

Mancini said she and her team will continue working toward printing structures with the magnetic field responsive fluid built-in to eliminate the manual in-filling stage, and on increasing the overall size of the structures.