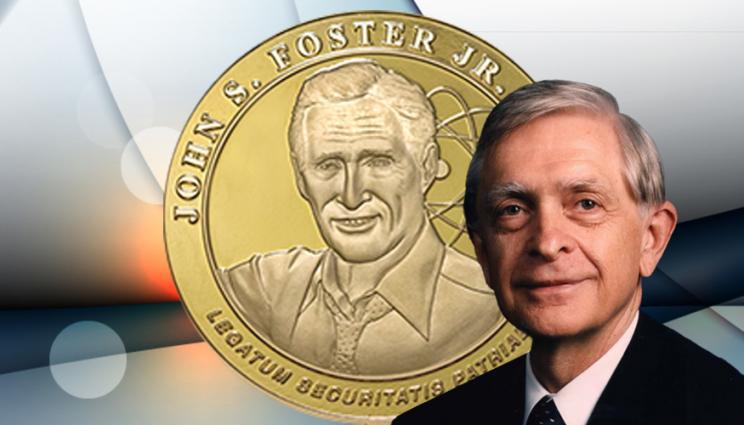 For more than 60 years, John Nuckolls has dedicated his career to advancing science and technology in support of U.S. national security. In recognition of his outstanding leadership and service to the nation, he has been named the fourth recipient of the John S. Foster Jr. Medal.

For more than 60 years, John Nuckolls has dedicated his career to advancing science and technology in support of U.S. national security. In recognition of his outstanding leadership and service to the nation, he has been named the fourth recipient of the John S. Foster Jr. Medal.

Established by Lawrence Livermore National Security, LLC (LLNS) and bestowed on an annual basis by the director of Lawrence Livermore National Laboratory (LLNL), the medal recognizes an individual for exceptional leadership in scientific, technical and engineering development and policy formulation in support of U.S. nuclear security. Instituted in 2015, the inaugural recipient was namesake John S. Foster Jr., former director of LLNL. The 2016 honoree was Gen. Larry Welch (retired), former U.S. Air Force Chief of Staff, and the 2017 honoree was Victor Reis, the architect of the Stockpile Stewardship Program.

"I am honored and deeply appreciative of my selection to receive the 2018 John S. Foster, Jr. medal," Nuckolls said. "For 63 years, the Laboratory, my colleagues and thousands of extraordinary Laboratory people have enabled my contributions to our nation."

"It would be difficult to overstate the impact that John Nuckolls has had on national security," LLNL Director Bill Goldstein said. "He was an extraordinary nuclear designer and the major force in the establishment of the laser fusion program. As director, he oversaw the transition from the Cold War program to the broad national security enterprise that characterizes the Lab’s efforts today. He is an extremely worthy recipient of the Foster Medal."

Nuckolls joined the Lawrence Radiation Laboratory at Livermore in 1955 as an aspiring young physicist from Columbia University. Fourteen years later, he received the E.O. Lawrence Award for his contributions to the development of high efficiency thermonuclear explosives. Although the details of his work during that period remain classified, he was broadly regarded as one of the most creative members of the thermonuclear design division ("A") and was the principal designer of several innovative concepts successfully tested at the Pacific Proving Grounds.

During that same period, he explored novel methods for thermonuclear ignition of small deuterium-tritium capsules, and following the invention of the laser in 1960, he pursued the possibility of using high-power lasers to achieve that goal. He and like-minded colleagues intensified their research in the early 1970s and they published the seminal paper in the new field of inertial confinement fusion (ICF), "Laser Compression of Matter to Super-High Densities: Thermonuclear (CTR) Applications," Nature 219, 139 (1972). For the next decade, Nuckolls led X Division, the group charged with the theoretical and computational aspects of ICF, and in collaboration with the laser division, they enabled the development of and experiments with a series of increasingly powerful lasers, culminating with Nova in the early 1980s.

In 1983, Nuckolls was selected as associate director for Physics, and in that role catalyzed the emergence of LLNL as a state-of-the-art research institution as well as an outstanding nuclear laboratory. He pushed the use of institutional research and development funds for a number of imaginative projects: the Center for Accelerator Mass Spectrometry, Laser Guidestar, the measurement of the neutrino mass, the applications of chaos theory to nuclear weapons and other fields, and a strong collaboration with SLAC and Lawrence Berkeley national laboratories on the B-factory. He essentially became the deputy director for Science at the Laboratory long before that became an official position.

In 1988, he was chosen as the seventh director of the Laboratory. He led the institution through one of its most difficult periods as the Cold War gradually ended, with the subsequent stopping of nuclear testing and major reductions in the nuclear weapons budget. He began the transition of the nuclear weapons program from one that included full-scale nuclear testing to one that relied on laboratory experiments, enhanced simulation and scientific understanding.

His time as director also will be remembered for three actions: the creation of a new organization, the Nonproliferation and Arms Control Directorate (NAI); the first Lab exchange visits with the LLNL’s Russian counterparts; and the signing of KD-0, the crucial first step in beginning the process that would lead to the National Ignition Facility (NIF). NAI would become the predecessor for the global security organizations that now exist at many laboratories following the events of Sept. 11, 2001. The Russian exchange, initiated by Nuckolls and Los Alamos Director Sig Hecker, would usher in more than a decade of productive interactions with the Russian mirror images of Livermore and Los Alamos. Finally, KD-0 for NIF would probably never have occurred without Nuckolls’ persistence and marshalling of support from the Los Alamos and Sandia national laboratories.

Since stepping down as director in 1994, Nuckolls has been involved with many advisory boards in defense, energy and applied science. He also has received awards from the secretaries of Defense and Energy, joining his earlier Lawrence Award, Teller medal and Maxwell Prize.

Nuckolls will receive the John S. Foster, Jr. Medal at a ceremony this fall.