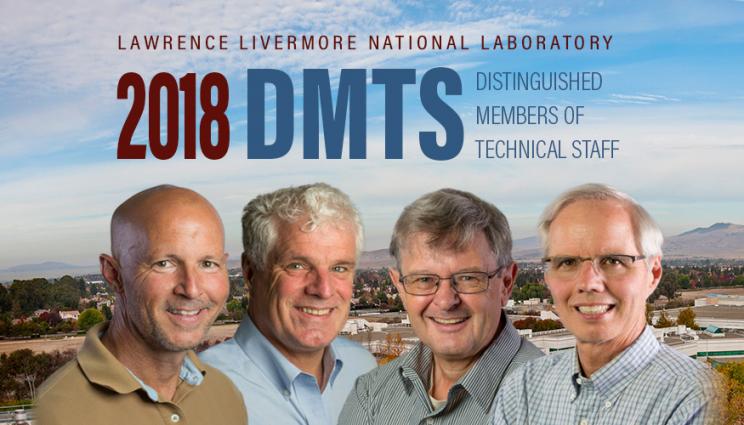 Four Lawrence Livermore National Laboratory (LLNL) researchers have been named Distinguished Members of Technical Staff (DMTS) for their extraordinary scientific and technical contributions to the Laboratory and its missions, as acknowledged by their professional peers and the larger community.

Peter Beiersdorfer and Paul Springer of the Physical and Life Sciences Directorate, Robert Falgout of the Computation Directorate and William Pitz of the Materials Science Division have earned the DMTS designation by reaching the highest technical staff level achievable by a scientist or engineer at the Lab.

Beiersdorfer’s research addresses astronomical environments at extreme-ultraviolet and X-ray wavelengths. He pioneered techniques to reproduce conditions on comets and in the sun's atmosphere, interstellar space and the centers of galaxies. A major focus of his research involves characterizing atomic and molecular diagnostics as revealed by their X-ray spectra. A leader in X-ray spectroscopy, he has contributed to atomic physics, astrophysics, the spectroscopy of laser-produced plasmas and magnetically confined plasmas at major laser facilities and tokamaks worldwide.

"It has been a pleasure and wonderful opportunity to partake in cutting-edge science over the past 30 years at the Lab," Beiersdorfer said. "To be selected on top of that as a DMTS makes me feel very honored."

Beiersdorfer's previous honors include the 2016 Laboratory Astrophysics Prize from the American Astronomical Society, fellowship in the American Physical Society (APS) and numerous LLNL Distinguished Achievement Awards. He received one of the inaugural Outstanding Referee Awards of the APS, and beginning in January 2016, he became the chair of the nearly 3,000-member-strong Far West Section of the APS. Together with his collaborators he published more than 500 scientific papers. With continuous NASA support, Beiersdorfer has carried out laboratory astrophysics work at the Livermore Electron Beam Ion Trap  (EBIT) facility since 1991.

Falgout is a computational mathematician at the Center for Advanced Scientific Computing and the project leader for the Scalable Linear Solvers Project and the hypre linear solver library, which has become one of the most widely used packages for the massively parallel solution of linear systems of equations.

He focuses on developing multilevel methods, as well as the design and parallel computing issues related to delivering these methods to the scientific simulation community. He initiated the parallel-in-time effort XBraid and was original technical lead of the ParFlow subsurface modeling code.

"I feel truly honored to be recognized with this award," Falgout said. "I am at the same time deeply grateful to the many exceptional people I have had the fortune to work with during my career, without whom I would not be where I am today. They include fellow computational mathematicians, computer scientists, physicists, engineers, managers, mentors, administrators, professors, postdocs, students and friends.  When I joined LLNL as a postdoc in 1991, I thought I would leave after two years. I quickly learned that there is no better place to do leading-edge research in large-scale computational science than here."

Pitz studies chemical kinetic mechanisms for hydrocarbon fuels, oxygenated fuels and oil-sand-derived fuel. He applies these mechanisms to such problems as combustion in homogeneous charge compression ignition and diesel engines.

After joining LLNL in the early 1980s, he and colleagues developed combustion kinetic models for fuels with large numbers of carbon atoms, giving LLNL at the time the only multi-fuel, large-molecule kinetic modeling capabilities in the world. In 2014, he was named to the Thomson Reuters list of "World’s Most Influential Scientific Minds."

"I have been fortunate to have received strong mentorship early in my career at LLNL and have been privileged to work with many talented researchers," Pitz said. "LLNL has provided a research team environment that has allowed me to be very productive.  Also, I have been fortunate that my research area has received a lot of recent attention and long-term support from DOE. I am very grateful to be selected for such an honor."

He has made high-impact astrophysical measurements, including one of the mass of the neutrino, helped develop ultra-short pulsed laser capabilities, worked on establishing experimental foundations for stockpile stewardship research at NIF, carried out pioneering experiments on radiative processes relevant to weapons physics and advanced the modeling and measurements of ICF experiments.

"I am honored to be selected as a Distinguished Member of Technical Staff and recognized as a contributor to the Lab’s tradition of sustained excellence," Springer said. "This tradition depends on the coordinated efforts of many talented scientists, engineers and technical staff as well cutting-edge technology and facilities applied to important missions. I am extremely grateful to all the talented people that I have been privileged to work with throughout my career. "