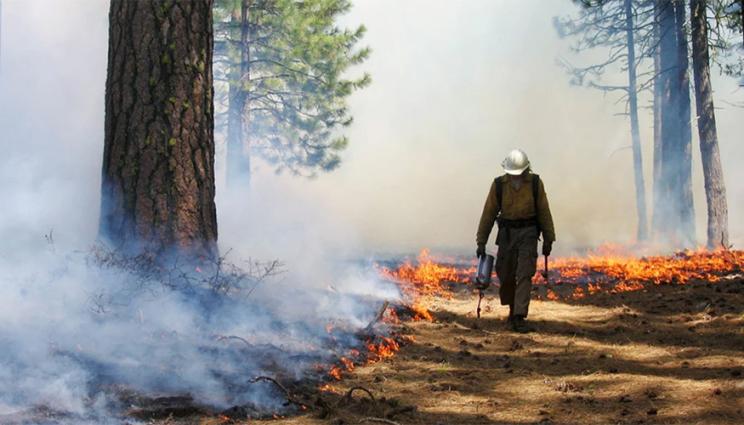 Controlled burns, like this one in Lassen Volcanic National Park, reduce the risk of extreme fires by clearing flammable brush. Photo courtesy of the National Park Service.

Wildfires and prescribed burns, which can promote soil organic matter stability, may be an important nature-based climate solution to increase long-term carbon storage.

That is the conclusion of an international team of researchers, including a scientist from Lawrence Livermore National Laboratory (LLNL), who looked at the effect of wildfires and prescribed burns on the global carbon cycle. The research appears in Nature Geosciences.

Soils are the largest pool of organic carbon (C) on land, and they offer both an opportunity and a risk to climate-C feedbacks in the Earth system because of their role in the global C cycle as well as their vulnerability to disturbance.

Disturbance by fire may lead to carbon losses because fires combust plant biomass and organic soil layers and promote erosion and leaching. This subsequently reduces inputs to and stimulates losses from soils that can persist for several years after the fire.

“What we found, however, is that fires can cause several transformations within an ecosystem that can offset the immediate carbon losses and may ultimately stabilize the ecosystem,” said LLNL scientist and Lawrence Fellow Katerina Georgiou, a co-author of the paper.

Nearly 70 percent of global topsoil carbon is in fire-prone regions. The team found that fire-driven changes to the persistence of soil organic matter (SOM) are potentially important for offsetting combustion-based C losses by reducing decomposition.

Despite extensive research into how fire alters the properties of SOM, there has been only a limited connection between changes in the SOM properties and the response of soil C fluxes to long-term shifts in fire frequencies and intensities. Most studies that connect fire effects on soil C fluxes with changes in SOM properties focus on the formation of pyrogenic C, which is considered one of the most stable components in soil and can represent more than 30 percent of total soil organic carbon in some soils.

However, pyrogenic C formation can be minimal in ecosystems with a low woody biomass and is just one of the many fire-driven changes relevant to SOM stability. Burning can change the soil porosity, aggregate formation, soil hydrophobicity, potential sorption of organic matter to minerals, microbial biomass and composition and the soil pH — all of which alter the decomposition of the SOM.

In the new research, the team reviewed the evidence for how fire affects the factors that determine the SOM stability — and not just the SOM content alone — to better understand how changes in decomposition dynamics influence the response of soil C storage to shifting fire regimes.

“We examined how fire impacts soil carbon storage and stability across different biomes and explored ways that fire can be used as a natural climate solution in select biomes to promote soil carbon stability,” Georgiou said.

Researchers from the University of Cambridge and Stanford University also contributed to the study. The LLNL portion of the work was funded by the Lawrence Fellow and the Laboratory Directed Research and Development programs.