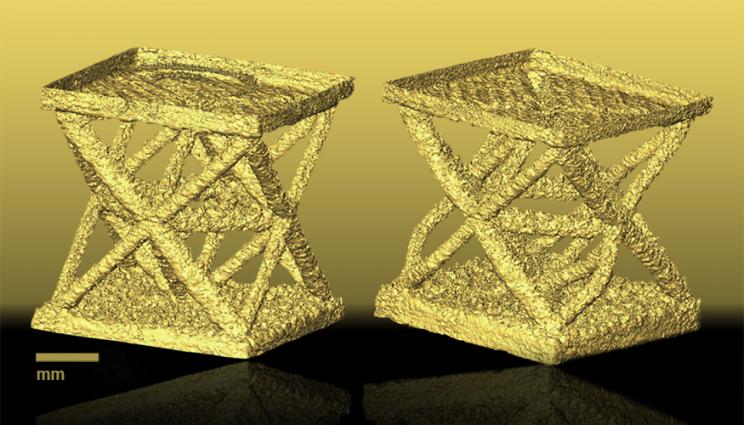 In situ compression results for a 10 percent octet structure show the force versus displacement plot for the same octet sample. At left, the 3D tomography surface under no load and at right, after the onset of an elastic deformation.

Specifically, experiments showed a transition in failure modes for stretch-dominated lattice structures at low relative densities. Understanding the dominant failure mode is critical to the deployment of lightweight micro-trusses as it influences the energy absorption capacity of the structure.

Lightweight lattice structures, like trusses, have been used for centuries — think of trestle bridges and the Eiffel Tower as common examples — due to their low density and high specific strength and stiffness. With additive manufacturing (3D printing), these types of structures can be miniaturized to considerably smaller length scales. However, scientists were not sure if models, used to predict the failure behavior of large-scale ligh-weight structures, would hold up at the smaller-length scales.

LLNL researchers Mark Messner (now at Argonne National Laboratory) and Holly Carlton have published these findings in the Journal of Mechanics and Physics of Solids and Acta Materialia, respectively. Messner used a newly developed equivalent continuum model to predict failure behavior in truss structures. This method, applied to standard cell topologies, predicts a tradeoff between a more graceful yield-dominated and a catastrophic buckling-dominated failure mode at a critical relative density. However, the critical relative density predicted in his theoretical model depends on several modeling assumptions that are strongly influenced by the manufacturing process.

These are the first studies where theoretical models were used to predict failure in miniaturized lattice structures and then tested experimentally to evaluate whether these predictions hold up. These findings have implications for how scientists and engineers design and fabricate architected structures for future applications.

Other LLNL authors on the study are Jonathan Lind, Nickolai Volkoff-Shoemaker, Nathan Barton and Mukul Kumar.