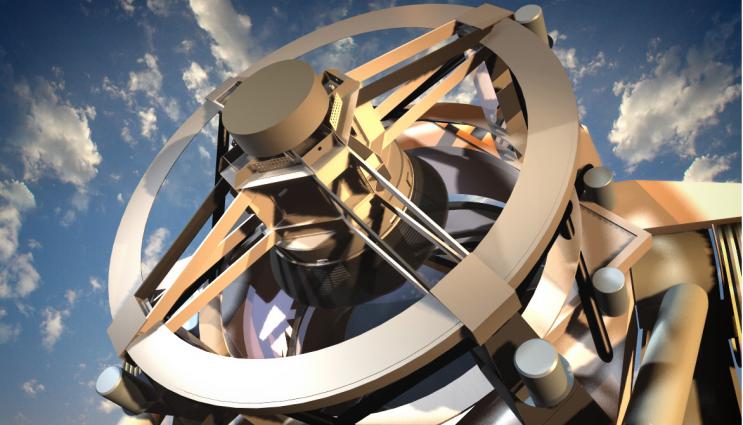 The Department of Energy has approved the start of construction for a 3.2-gigapixel digital camera — the world’s largest — for the Large Synoptic Survey Telescope (LSST).

The construction milestone, known as Critical Decision 3, is the last major approval decision before the acceptance of the finished camera. Construction of the telescope was previously approved by the National Science Foundation (NSF) in August 2014.

The LSST was the top-ranked major ground-based facility recommended by the National Research Council’s Astronomy and Astrophysics decadal survey committee in its 2010 report, "New Worlds, New Horizons." The recent report of the Particle Physics Project Prioritization Panel of the federal High Energy Physics Advisory Panel, setting forth the strategic plan for U.S. particle physics, also recommended completion of the LSST. DOE is funding the camera, while financial support for the telescope and site facilities, the data management system, and the education and public outreach infrastructure of LSST comes primarily from the National Science Foundation (NSF).

Starting in 2022, the 8.4-meter LSST will take digital images of the entire visible southern sky every few nights, revealing unprecedented details of the universe and helping unravel some of its greatest mysteries. During a 10-year time frame, LSST will detect tens of billions of objects — the first time a telescope will observe more galaxies than there are people on Earth — and will create movies of the sky. This data will help researchers study the formation of galaxies, track potentially hazardous asteroids, observe exploding stars and better understand dark matter and dark energy, which together make up 95 percent of the universe but whose makeup remains unknown.

The telescope’s camera — the size of a small car and weighing more than three tons — will capture full-sky images at such high resolution that it would take 1,500 high-definition television screens to display just one picture. The camera is being built by an international collaboration of universities and labs, including Lawrence Livermore (LLNL) and Brookhaven national laboratories, and led by the SLAC National Accelerator Laboratory at Stanford. Building and testing the camera will take approximately five years.

Research scientists aren’t the only ones who will have access to the LSST data. Anyone with a computer will be able to fly through the universe, past objects a hundred million times fainter than can be observed with the unaided eye. The LSST project will provide analysis tools to enable both students and the public to participate in the process of scientific discovery.

"The broad range of science enabled by the LSST survey will change our understanding of the dynamic universe on timescales ranging from its earliest moments after the Big Bang, to the motions of asteroids in the solar system today, said LSST Director Steven Kahn, of Stanford University. "The open nature of our data products means that the public will have the opportunity to share in this exciting adventure along with the scientific community."

Lawrence Livermore has played a pivotal role in the LSST project for more than a decade, including: development of the overall optical design; leadership in the development of the operations simulator (which calculates how the telescope can be optimally scheduled for multiple scientific programs); design of the wavefront sensing and guide sensor systems (which measure the aberrations in the telescope optics and the errors in pointing, so that these can be corrected by the telescope active optics and guiding systems); and design of the camera optics and filters, drawing on expertise in large optics development for the National Ignition Facility, the world's largest laser.

The Laboratory’s current role in the LSST project includes a key management position for the camera system along with leadership responsibilities for two of the major camera sub-systems, the camera optics and the camera "corner rafts," which contain the wavefront and guide sensors. LLNL engineer, Vincent Riot serves as the deputy project manager for the camera and the project engineer for the corner rafts.  LLNL engineer Scott Winters manages the development of the camera optics, consisting of three refractive lenses and six filters that are the largest optical elements of their type ever constructed. Last year, the Laboratory selected Ball Aerospace & Technologies Corp. to build the optics and support structure for the two largest lenses, and recently, the Lab chose Thales SESO to build the optics and support structure for the third lens, which also serves as the vacuum window into the cryostat containing the camera’s sensors.

LLNL researchers are already gearing up to use the data from LSST. Lab physicist Michael Schneider leads activities at Livermore to understand how well LSST will be able to estimate cosmological parameters using observations of weak gravitational lensing of galaxy images — the distortion of observed shapes of galaxies due to intervening mass concentrations along the line of sight from the galaxies to the Earth — which will help determine the properties of dark matter and dark energy in the universe.

"This is the largest ground-based telescope being built with U.S. federal funding in this decade," said Scot Olivier, Livermore’s lead on the LSST. "It’s the No. 1 ranked project coming out of the decadal survey and now it’s moving forward with full approval from both the DOE and the NSF. It will be the world’s premier astronomical survey facility for the next decade and beyond."

The LSST will see first light in 2019 and begin full science operations in 2022. The camera construction approval culminates more than 10 years of developing, planning and reviewing of the LSST concept.

Financial support for LSST comes from the National Science Foundation, the Department of Energy Office of Science and private funding raised by the LSST Corporation. The NSF-funded LSST Project Office for construction was established as an operating center under management of the Association of Universities for Research in Astronomy. The DOE-funded effort to build the LSST camera is managed by the SLAC National Accelerator Laboratory.