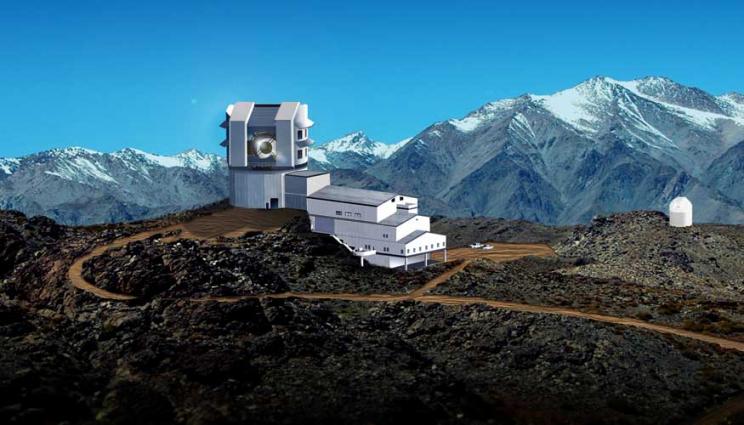 The Large Synoptic Survey Telescope (LSST) recently got the green light to begin construction. LSST will survey the entire visible sky deeply in multiple colors every week with its three-billion pixel digital camera, probing the mysteries of dark matter and dark energy, and opening a movie-like window on objects that change or move rapidly such as exploding supernovae, potentially hazardous near-Earth asteroids and distant Kuiper Belt objects. Lawrence Livermore plays a pivotal role in the project.

The National Science Foundation (NSF) has agreed to support the Association of Universities for Research in Astronomy (AURA) to manage the construction of the Large Synoptic Survey Telescope (LSST).

This marks the official federal start of the LSST project, the top-ranked major ground-based facility recommended by the National Research Council's Astronomy and Astrophysics decadal survey committee in its 2010 report, "New Worlds, New Horizons." It is an NSF and Department of Energy (DOE) partnership, with NSF responsible for the telescope and site, education and outreach, and the data management system and DOE providing the camera and related instrumentation. Both agencies expect to support post-construction operation of the observatory.

Lawrence Livermore has played a pivotal role in the LSST project over the last decade, including: development of the overall optical design; leadership in the development of the operations simulator (which calculates how the telescope can be optimally scheduled for multiple scientific programs); design of the wavefront sensing and guide sensor systems (which measure the aberrations in the telescope optics and the errors in pointing, so that these can be corrected by the telescope active optics and guiding systems); and design of the camera optics and filters (drawing on expertise from the National Ignition Facility's large optics development).

The Laboratory's current role in the LSST project includes a key management position for the camera system along with leadership responsibilities for two of the major camera sub-systems, the camera optics and the camera "corner rafts," which contain the wavefront and guide sensors. LLNL engineer Vincent Riot serves as the deputy project manager for the camera and is the project engineer for the corner rafts. LLNL also is responsible for the delivery of the camera optics and filters, the largest optical elements of their type ever constructed. The Laboratory recently selected Ball Aerospace & Technologies Corp. to build the optics and support structure for the two largest lenses, designated as the L1-L2 lens assembly, for the camera on the LSST, which will sit atop the 8,800 ft. tall Cerro Pachon mountaintop in Chile.

The 8.4-meter LSST will survey the entire visible sky deeply in multiple colors every week with its three-billion pixel digital camera, probing the mysteries of dark matter and dark energy, and opening a movie-like window on objects that change or move rapidly: exploding supernovae, potentially hazardous near-Earth asteroids and distant Kuiper Belt objects.

"This is the largest ground-based telescope being built with U.S. federal funding in this decade," said Scot Olivier, Livermore's lead on the LSST. "It's the No. 1 ranked project coming out of the decadal survey and now it's moving forward. It will be the world's premier astronomical survey facility for the next decade and beyond."

Research scientists aren't the only ones who will have access to the LSST data. Anyone with a computer will be able to fly through the universe, past objects a hundred million times fainter than can be observed with the unaided eye. The LSST project will provide analysis tools to enable both students and the public to participate in the process of scientific discovery.

The NSF construction budget for LSST is not to exceed $473 million. The DOE camera fabrication budget will be baselined later this year, but is estimated to be $165 million. Operations costs will be around $40 million per year for the 10-year survey. With the approved start,LSST will see first light in 2019 and begin full science operations in 2022. The construction approval culminates more than 10 years of developing, planning and reviewing of the LSST concept.

LSST Director Steven Kahn of Stanford University commented on the unique contributions LSST will make to astronomy and fundamental physics: "The broad range of science enabled by the LSST survey will change our understanding of the dynamic universe on timescales ranging from its earliest moments after the Big Bang to the motions of asteroids in the solar system today. The open nature of our data products means that the public will have the opportunity to share in this exciting adventure along with the scientific community."

The early development of LSST was supported by the LSST Corporation (LSSTC), a non-profit consortium of universities and other research institutions.

LSST project activities are supported through a partnership between the NSF and the Department of Energy. NSF supports LSST through a Cooperative Agreement managed by AURA).The Department of Energy funded effort is managed by the SLAC National Accelerator Laboratory (SLAC).Additional LSST funding comes from private donations, grants to universities, and in-kind support from Institutional Members of LSSTC. Learn more about LSST.