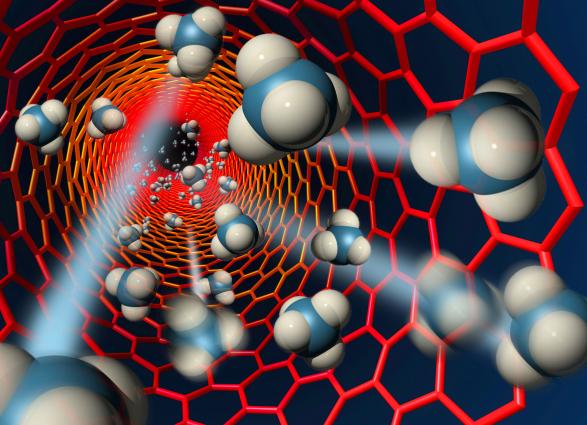 Artist's rendering of methane molecules flowing through a carbon nanotube less than two nanometers in diameter. Image by Scott Dougherty 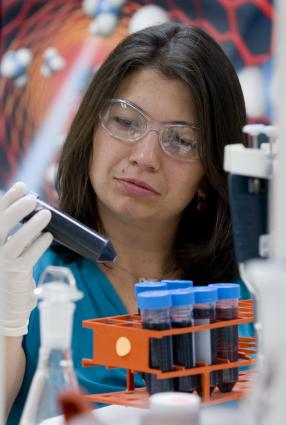 Researchers in carbon nanotubes, originally developed at the Laboratory, have been awarded more than $100,000 by the California Energy Commission to apply the technology to curbing industrial pollution.

Hayward-based Porifera, Inc., headed by former Lab scientist Olgica Bakajin, was awarded $115,397 for a project to research and develop carbon nanotube membranes to efficiently separate carbon dioxide from industrial emissions. The project budget is $1,442,469, with $1,153,975 coming from an American Recovery and Reinvestment Act (ARRA) grant. The company will provide $173,097 in funds for the project.

The goal of the project is to replace the chemical-based carbon dioxide separation technology with membrane-based technology. Carbon nanotube membranes are comprised of extremely small (about 10,000 times smaller than a human hair) and strong hollow tubes made of graphite carbon atoms. Gas flows through these tubes 100 times faster than the pores in other types of membranes.

If successful, carbon nanotube membranes could potentially deliver better efficiency, lower energy consumption, and provide cheaper carbon dioxide sequestration than the current process. The research team for the project includes scientists and engineers from Porifera, Lawrence Livermore and the University of California at Berkeley.

Late last year, LLNL exclusively licensed to Porifera the carbon nanotube technology that can be used to desalinate water and can be applied to other liquid-based separations.

Bakajin formerly worked at LLNL where she was recruited in 2000 as a Lawrence Fellow and then moved on to become chief scientist on the carbon nanotube project along with LLNL alumnus Aleksandr Noy, another former Lawrence Fellow. The license was awarded through LLNL's Industrial Partnership Office.

Porifera is developing membranes with vastly superior permeability, durability and selectivity for water purification and other applications in the clean tech sector such as CO2 sequestration. The technology is based on discoveries made at LLNL.

The technology first took off when it was funded by Livermore's Laboratory Directed Research and Development Program and supported by the Science and Technology Principal Directorate. Bakajin and Noy's research originally focused on using carbon nanotubes as a less expensive solution to desalination. The technique was first demonstrated using a nanotube membrane on a silicon chip the size of a quarter.