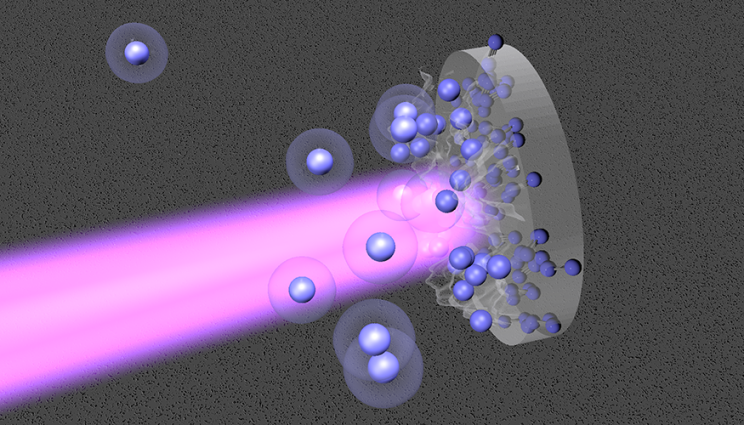 Laser-driven shock waves reaching several million atmospheres break the extremely strong triple-bond of nitrogen molecules and free up a fraction of the L-shell electrons of the dissociated atoms. Image by Liam Krauss/LLNL.

Lawrence Livermore National Laboratory (LLNL) scientists recently obtained high-precision thermodynamic data on warm dense nitrogen at extreme conditions that could lead to a better understanding of the interiors of celestial objects like white dwarfs and exoplanets.

Molecules of nitrogen (N2) make up 78% of the air we breathe.They are unique because the two nitrogen atoms in N2 are bound with a triple covalent bond, which is the strongest of all simple diatomic molecules. Nitrogen also is an important constituent of celestial bodies in the outer solar system and beyond. For example, ammonia (NH3) storms are believed to exist in giant planets like Jupiter, while the dwarf planet Pluto, Saturn’s icy moon Titan and Neptune’s icy moon Triton have N2-rich atmospheres.

Previous studies with this powerful technique revealed experimental evidence for superionic water ice and helium rain in gas-giant planets. In the new research, the team conducted shock experiments on precompressed molecular nitrogen fluid up to 800 GPa (~8 million atmospheres) of pressure.

They observed clear signatures for the completion of molecular dissociation near 70-100 GPa and 5-10 kK (thousands of kelvins) and the onset of ionization for the outermost electrons above 400 GPa and 50 kK.

“It is very exciting that we can use shock waves to break these molecules and understand how pressure and density induce changes in chemical bonding,” said LLNL physicist Yong-Jae Kim, lead author of a paper appearing in Physical Review Letters. “Studying how to break nitrogen molecules and how to free up electrons is a great test for the most advanced computer simulations and theoretical modeling.“

The team also theorized that studying nitrogen might help to unlock some of the mysteries regarding the behavior of hydrogen molecules in the early stage of inertial confinement fusion implosions at the National Ignition Facility.

“While nitrogen and hydrogen are both light diatomic molecules, hydrogen atoms are so small that reproducing their behavior under extreme pressure and temperature with computer simulations is very complex,” Kim said.

The team took a closer look at the comparison between the experimental data in the new research and the corresponding simulated pressure-density curves starting from different initial densities. The comparison provided further conﬁdence in the ability of computer simulations using the density functional theory (DFT) molecular dynamics technique to accurately capture the subtle quantum physics changes in material properties at these previously undocumented conditions. In particular, the new data resolved a puzzling discrepancy between previous experiments on warm dense nitrogen and predictions based on the results of the DFT simulations.

“We showed that density functional theory works really well to describe our experiments. This is a very stringent and useful test,” Kim said.

The research is part of a Laboratory Directed Research and Development (LDRD) project to develop new laser-driven dynamic compression experimental techniques with diamond anvil cell (DAC) targets. These techniques could unravel new physics and chemistry phenomena in low atomic-number mixtures, such as those rich in water, over a wide range of unprecedented pressure-temperature-density conditions. The research has implications for planet formation and evolution and provide insights into the properties of matter under extreme conditions.

In particular, Kim is now leading experiments to develop the use of DAC targets at the National Ignition Facility. This could help further study nitrogen and unravel new exotic phenomena at much lower temperatures, linked to the 1980s observation of shock-induced cooling and the 2010s prediction of a ﬁrst-order transition between molecular and polymeric nitrogen ﬂuids below 2,000 K.

“There are a lot more things we can learn from this kind of laser dynamic compression experiments,”said Marius Millot, a LLNL principal investigator of the LDRD project and the senior author of the paper. “This is a very exciting field with multiple opportunities to develop innovative measurement and unravel matter’s response to extreme conditions. This is key to interpret astronomical observations and better understand the formation and evolution of celestial objects such as white dwarfs and exoplanets.”

Other Livermore researchers include Brian Boates, Stanimir Bonev, Peter Celliers, Kevin Driver, Dayne Fratanduano, Sebastien Hamel, Damian Swift and Jon Eggert. Also, Eric Folsom, Renee Posadas, Carol Davis and Jim Emig contributed to the success of the project by assisting with the target preparation and metrology at the HEDS Center Technology Facility. The research is funded by the LDRD program.