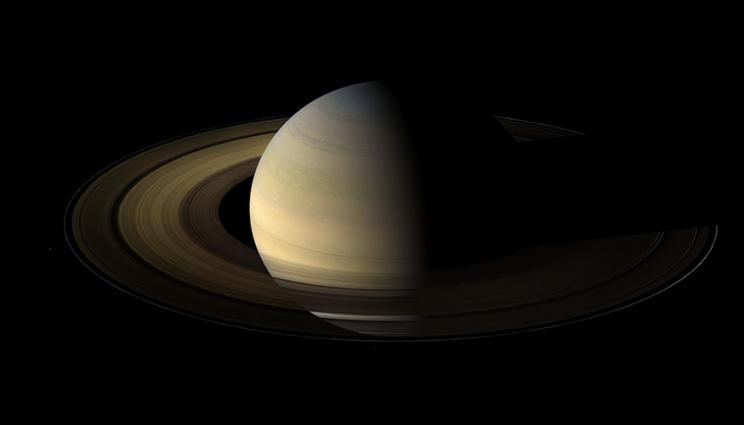 An international research team, including scientists from Lawrence Livermore National Laboratory, have validated a nearly 40-year-old prediction and experimentally shown that helium rain is possible inside planets such as Jupiter and Saturn (pictured). Image credit: NASA/JPL/Space Science Institute.

Experiments validate the possibility of helium rain inside Jupiter and Saturn

Nearly 40 years ago, scientists first predicted the existence of helium rain inside planets composed primarily of hydrogen and helium, such as Jupiter and Saturn. However, achieving the experimental conditions necessary to validate this hypothesis hasn’t been possible — until now.

In a paper published today by Nature, scientists reveal experimental evidence to support this long-standing prediction, showing that helium rain is possible over a range of pressure and temperature conditions that mirror those expected to occur inside these planets.

“We discovered that helium rain is real, and can occur both in Jupiter and Saturn,” said Marius Millot, a physicist at Lawrence Livermore National Laboratory (LLNL) and co-author on the publication. “This is important to help planetary scientists decipher how these planets formed and evolved, which is critical to understanding how the solar system formed.”

“Jupiter is especially interesting because it's thought to have helped protect the inner-planet region where Earth formed,” added Raymond Jeanloz, co-author and professor of earth and planetary science and astronomy at the University of California, Berkeley. “We may be here because of Jupiter.”

“Coupling static compression and laser-driven shocks is key to allow us to reach the conditions comparable to the interior of Jupiter and Saturn, but it is very challenging,” Millot said. “We really had to work on the technique to obtain convincing evidence. It took many years and lots of creativity from the team.”

The team used diamond anvil cells to compress a mixture of hydrogen and helium to 4 gigapascals, (GPa; approximately 40,000 times Earth’s atmosphere). Then, the scientists used 12 giant beams of LLE’s Omega Laser to launch strong shock waves to further compress the sample to final pressures of 60-180 GPa and heat it to several thousand degrees. A similar approach was key to the discovery of superionic water ice.

Using a series of ultrafast diagnostic tools, the team measured the shock velocity, the optical reflectivity of the shock-compressed sample and its thermal emission, finding that the reflectivity of the sample did not increase smoothly with increasing shock pressure, as in most samples the researchers studied with similar measurements. Instead, they found discontinuities in the observed reflectivity signal, which indicate that the electrical conductivity of the sample was changing abruptly, a signature of the helium and hydrogen mixture separating. In a paper published in 2011, LLNL scientists Sebastien Hamel, ﻿Miguel Morales and Eric Schwegler suggested using changes in the optical reflectivity as a probe for the demixing process.

“Our experiments reveal experimental evidence for a long-standing prediction: There is a range of pressures and temperatures at which this mixture becomes unstable and demixes,” Millot said. “This transition occurs at pressure and temperature conditions close to that needed to transform hydrogen into a metallic fluid, and the intuitive picture is that the hydrogen metallization triggers the demixing.”

Numerically simulating this demixing process is challenging because of subtle quantum effects. These experiments provide a critical benchmark for theory and numerical simulations. Looking ahead, the team will continue to refine the measurement and extend it to other compositions in the continued pursuit of improving our understanding of materials at extreme conditions.

The work was funded by LLNL’s Laboratory Directed Research and Development program and the Department of Energy’s Office of Science. In addition to Millot and Jeanloz, collaborators include Stephanie Brygoo and Paul Loubeyre of CEA; Peter Celliers and Jon Eggert from LLNL; and Ryan Rygg and Gilbert Collins from the University of Rochester.