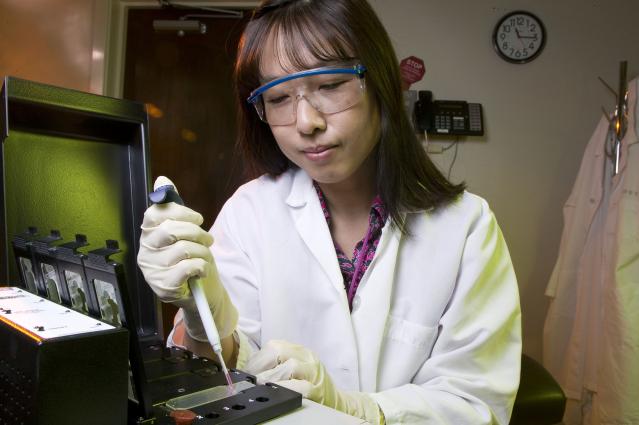 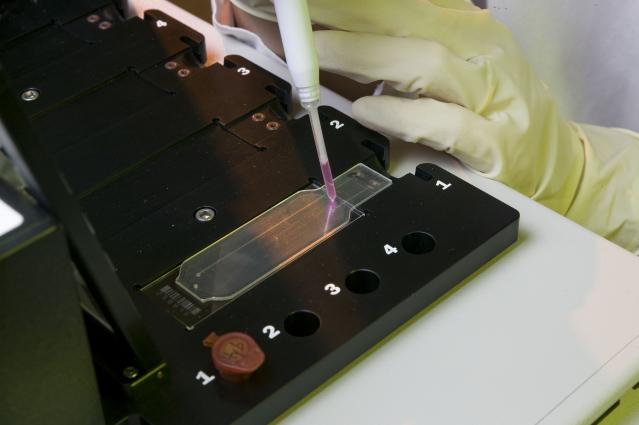 A Lawrence Livermore National Laboratory (LLNL)-developed biological detection technology has been employed as part of an international collaboration that has detected a virus in bladder cancers.

The research, performed in conjunction with scientists from the University of Split in Croatia, LLNL and the University of Jordan in Amman is believed to be the first study to demonstrate an association between Kaposi's sarcoma-associated herpesvirus (KSHV), also known as human herpesvirus 8, and bladder cancers.

The team's paper was published last month in the journal Tumor Biology, a publication of the International Society of Oncology and BioMarkers. Janos Terzic of the University of Split was the paper's lead author. The team included two researchers from LLNL -- Crystal Jaing, a biologist in LLNL's Biosciences and Biotechnology Division, and Kevin McLoughlin, a computational biologist in LLNL's Computation Directorate.

Biopsy specimens were collected from a total of 55 Croatian patients -- 44 men and 11 women -- who had been diagnosed with different stages of bladder cancer.

An initial screening of DNA extracts from three randomly selected biopsy specimens for the presence of viruses, using the Lawrence Livermore Microbial Detection Array (LLMDA), revealed that all three had the KSHV pathogen.

The Livermore results for the three tested samples were confirmed through KSHV-specific polymerase chain reaction (PCR) testing. Then PCR tests were performed on the remaining 52 biopsy specimens from the study group. Those tests showed that KSHV DNA was detected in 30 of the 55 patients, or 55 percent of the group.

"We're pleased that the LLMDA performed well in the testing of the bladder cancer samples," Jaing said. "For us, it is the first publication showing the technology used as the primary detector of a virus associated with a specific disease, which was then confirmed using other techniques."

In their paper, the authors noted that with the high prevalence of KSHV infection demonstrated in their study, the pathogen may play a role in the formation of bladder cancer, and warrants further study.

Bladder cancer is the seventh most common human malignancy and represents a global health problem. In addition to recognized risk factors, such as smoking and exposure to chemicals, various infectious agents also have been viewed as factors in the causes of the disease.

Developed between October 2007 and February 2008, the LLMDA detects viruses and bacteria with the use of 388,000 probes that fit in a checkerboard pattern in the middle of a one-inch-wide, three-inch-long glass slide.

The current operational version of the LLMDA contains probes that can detect about 3,100 viruses and about 2,000 bacteria. The array also encompasses fungi and protozoa -- with probes representing 136 fungi and 94 protozoa. Analysis of samples with the LLMDA can be completed within 24 hours.

In 2010, the LLMDA was used in a research study by scientists from five institutions who evaluated the DNA content of eight vaccines. Seven of the vaccines' contents turned out as expected, but one -- a vaccine used to prevent diarrhea in babies -- contained a pig virus, porcine circovirus-1 (PCV-1). There have been no signs of safety problems with the vaccine and the virus is not known to cause any kind of illness in people or animals.

Livermore's LLMDA has been used to test vaccine safety, cell substrates, wound samples, food safety and to detect pathogens in cancer, among other tasks, in more than two dozen collaborations with institutions such as the Mayo Clinic, the Moffitt Cancer Center, the Naval Medical Research Center, the California State Department of Health, the Centers for Disease Control, the University of Texas Medical Branch and the Blood Systems Research Institute. International collaborators include McMaster and McGill universities of Canada, the Statens Serum Institut of Denmark and the Centers for Disease Control of Taiwan.