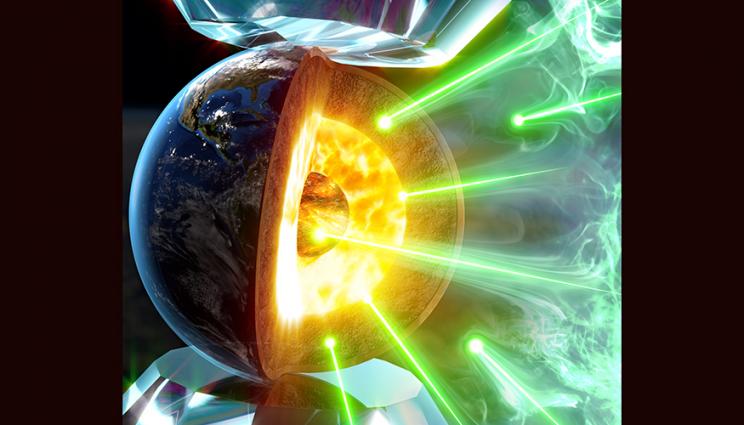 At the thermodynamic conditions of the Earth’s core, argon becomes chemically reactive and can form compounds with metals such as nickel. Image by Adam Connell/LLNL.

Argon is not so noble in the Earth’s core

The LLNL-led research was published as a cover article in ACS Earth Space Chemistry and highlighted in Chemical & Engineering News.

Radioactive decay of 40potassium (K) present in the Earth's core is one of the main sources of heat that is believed to be crucial for powering Earth’s geodynamo (a mechanism by which a celestial body such as Earth generates a magnetic field). However, the fate of argon produced during the decay of 40K is an open question. Noble gas elements (NGEs), such as argon, are considered the most chemically inert elements on the periodic table, showing very little reactivity with other elements at temperatures and pressures found on Earth’s surface. But in Earth’s core, the reaction of metals with NGEs turns out to be quite different.

“Although our recently published results highlight that a NGE, such as xenon, can react with metals at elevated thermodynamic conditions, previous theoretical studies suggested that Ar is quite reluctant to react with metals, even at pressures above those found in Earth’s core,” said Elissaios Stavrou, a staff member in the Materials Science Division at LLNL.

To find out argon’s fate, the team decided to challenge previous theoretical predictions and studied the possible reactivity of nickel with argon. When a nickel-argon mixture was subjected to pressures greater than 1.5 million times Earth’s atmospheric (surface) pressure and temperatures above 2,000 kelvin, X-ray diffraction measurements strongly indicated that a new compound was formed.

Calculations by UoS theorists Yansun Yao and Adebayo Adeleke revealed that at elevated temperatures argon could indeed react with nickel. Experiments pointed to an alloy of 50 percent argon and 50 percent nickel and the theoretical calculations perfectly matched a crystal structure of an intermetallic alloy showing argon and nickel equally interspersed in a solid solution.

“The reactivity of argon opens up the possibility of argon’s presence in Earth’s core and may help solve outstanding geological questions about argon’s location,” Stavrou said. “Extreme pressures and temperatures lead to new chemistry rules. Moreover, our study highlights the need of close synergy between experimental and theoretical studies in this new frontier of chemical properties under extreme thermodynamic conditions.”

Co-authors include Yao and Adeleke of UoS, Vitali Prakapenka and Eran Greenberg of the Advanced Photon Source at the University of Chicago, and Martin Kunz of the Advanced Light Source at LBNL. Funding was provided by the LLNL Laboratory Directed Research and Development program.