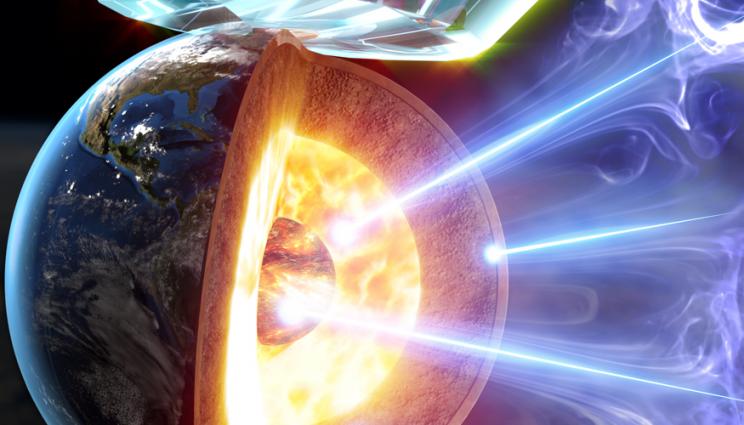 LLNL scientists discovered that at the thermodynamic conditions in Earth’s core, metals such as iron and nickel become electronegative and attract electrons. Image by Adam Connell/TID.

At temperatures and pressures found on Earth’s surface, metallic elements are electropositive and lose their valence electrons to form positively charged cations. Metals have free electrons that naturally form compounds with electronegative elements. For example, iron reacts with oxygen to form Fe2O3 – commonly referred to as rust.

In contrast, noble gas elements (NGEs), such as argon, neon and xenon -- considered the most chemically inert elements – show very little reactivity with other elements.

However, in the Earth’s core, the reaction of metals with NGEs is quite different. Lawrence Livermore National Laboratory (LLNL) scientists, in collaboration with researchers at the University of Saskatchewan (UoS), the Carnegie Geophysical Laboratory (GL) and the University of Chicago, challenged this basic chemical phenomenon by examining the possible reaction between iron and nickel with xenon at thermodynamic conditions like those found in Earth's core. Using synchrotron X-ray diffraction and Raman spectroscopy diagnostics in concert with first principles calculations, they discovered that it is possible to create stable xenon iron/nickel intermetallic compounds at Earth-core thermodynamic conditions. The experimental team used a natural iron meteorite, which fell on the Sikhote-Alin mountains in Russia, as a proxy to Earth’s core composition.

The research is published in the Feb. 28 edition of Physical Review Letters.

"In spite of our intentions, Elis and I were floored when, at the X-ray beamline, a clear signature of a reaction between iron and nickel with xenon was signaled by the diffraction pattern," added LLNL physical chemist Joe Zaug.

Heavy NGEs like xenon are known to react with strong electronegative elements, such as halogens; however, as Stavrou added: "This is the first experimental evidence of a noble gas element reacting with a metal."

If this discovery were not enough, a transformative process was found to attribute the process where xenon reacted with metallic elements. Calculations by UoS and GL theorists Yansun Yao and Hanyu Liu revealed that at these conditions, iron and nickel metals become extraordinarily electronegative and attracted electrons away from xenon.

"Amazing," Zaug said, "The metals effectively became halogen-like under the Earth-core conditions we created in the laboratory."

Researchers contributing to the work include Yansun Yao of University of Saskatchewan, Alexander Goncharov, Sergey Lobanov and Hanyu Liu of Carnegie Institution for Science and Vitali Prakapenka and Eran Greenberg of the Advanced Photon Source/ University of Chicago.

This work was partially funded by a Laboratory Directed Research and Development Program project.