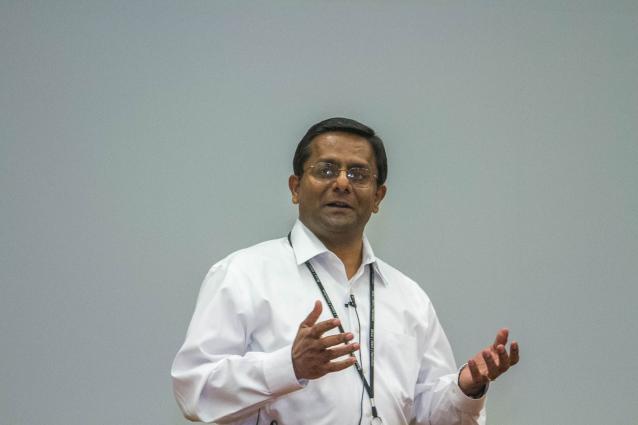 As the AD for Engineering , Krishnan will be responsible for leading an organization of approximately 1,600 employees who provide engineering expertise, capabilities and research that is vital to the success of the Laboratory's programs and to sustaining the long term vitality of our Laboratory's scientific foundations.

"Anantha is exceptionally well-qualified for this role and I am confident that he will be an outstanding advocate for the engineering discipline, sustain excellence in our engineering staff, ensure excellence in managing our critical facilities and lead the development of the next generation of our mission-enabling technologies," Goldstein said.

"I am honored to be taking on the role of associate director for Engineering," Krishnan said. "The Engineering Directorate has a long history of enabling the Lab to deliver on its ongoing missions while generating innovative ideas and concepts for future mission impact."

Krishnan has held multiple high-impact scientific and management positions since arriving at the Laboratory in 2005, and has quickly become a highly respected and accomplished leader. He has served as the deputy associate director in the Engineering Directorate and as the program director for Bio-Security, as well as the acting program director for Counterterrorism. He also served as the director of R&D in the Center for Micro- and Nano- Technology, and most recently, as the director for the Office of Mission Innovation. In these and other roles, Krishnan has seeded new Laboratory R&D initiatives in additive manufacturing, biomedical engineering and advanced sensor devices and systems.

Working with colleagues across the Laboratory, Krishnan was a key contributor to the diversification and revitalization of the biosecurity program portfolio. Prior to coming to the Laboratory, Krishnan was a program manager at the Defense Advanced Research Projects Agency (DARPA) from 1999 to 2005, where he managed several programs in nano-bio-technology and high performance microelectronic circuit design. In recognition of his efforts at DARPA, he was awarded the Medal for Exceptional Public Service by the Secretary of Defense in 2005.

He holds a doctoral degree in mechanical engineering from the Massachusetts Institute of Technology.

In making his announcement, Goldstein also thanked Lane for her "dedicated Laboratory service and, in particular, for her leadership as the Engineering associate director since 2010. Monya has led the engineering team in making wide ranging, high-impact contributions to the Laboratory's missions by ensuring the vitality of the engineering workforce, supporting the development of leading edge technologies and applying the organization's capabilities to meet a broad range of program needs and mission demands.

"Lane also has been a longtime advocate for Laboratory employees, championing important workforce initiatives in diversity and leadership development, and she has personally exemplified our Laboratory values throughout her career," Goldstein added. "We wish her the best in her future endeavors."

"It has been an honor working alongside some remarkable people, as well as leading the Lab's Engineering organization," Lane said. "Congratulations to Anantha and I wish everyone the best."
Tags:Engineering
Lynda L Seaver
seaver1 [at] llnl.gov
925-423-3103