Rows of wind turbines line the hills east of the Livermore Lab, a sight that has become more common across the country in recent years. Wind power saw the highest energy gains from 2011 to 2012, according to the most recent U.S. energy flow charts released by the Lawrence Livermore National Laboratory. Photo by Charles McGregor/LLNL 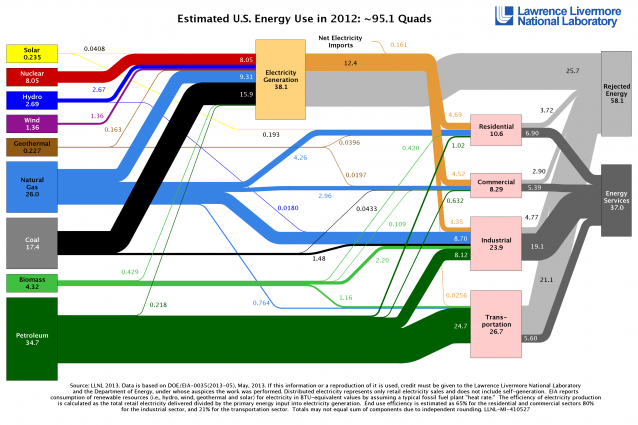 The 2012 energy flow chart released by Lawrence Livermore National Laboratory details the sources of energy production, how Americans are using energy and how much waste exists.

Each year, the Laboratory releases energy flow charts that track the nation's consumption of energy resources.

The rise in renewables is tied to both prices (the underlying cost of solar panels and wind turbines has gone down) and policy (government incentives to installers of equipment or renewable energy targets in various states), Simon said.

Overall, Americans used 2.2 quadrillion BTU, or quads, less in 2012 than the previous year (BTU or British Thermal Unit is a unit of measurement for energy; 3,400 BTU is equivalent to about 1 kW-hr).

Once again, wind power saw the highest gains, going from 1.17 quads produced in 2011 up to 1.36 quads in 2012. New wind farms continue to come on line with bigger, more efficient turbines that have been developed in response to government-sponsored incentives to invest in renewable energy.

Solar also jumped from 0.158 quads in 2011 to 0.235 quads in 2012.  Extraordinary declines in prices of photovoltaic panels, due to global oversupply, drove this shift.

This is the first year in at least a decade where there has been a measurable decrease in nuclear energy.

"It is likely to be a permanent cut as four nuclear reactors recently went offline (two units at San Onofre in California as well as the power stations at Kewaunee in Wisconsin and Crystal River in Florida)," Simon said. "There are a couple of nuclear plants under construction, but they won't come on for another few years."

Coal and oil use dropped in 2012 while natural gas use jumped to 26 quads from 24.9 quads the previous year. There is a direct correlation between a drop in coal electricity generation and the jump in electricity production from natural gas.