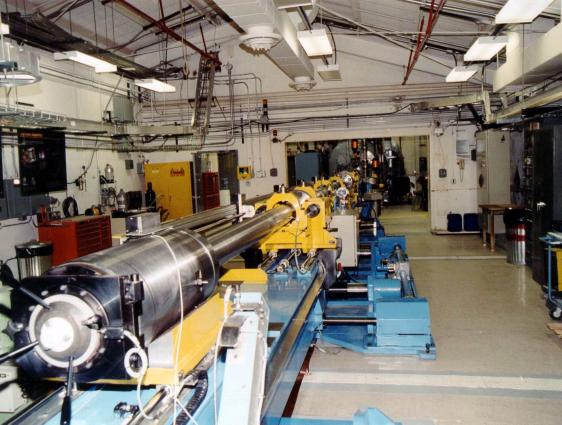 The JASPER two-stage gas gun, as seen from the loading port. The target chamber is visible in the background. 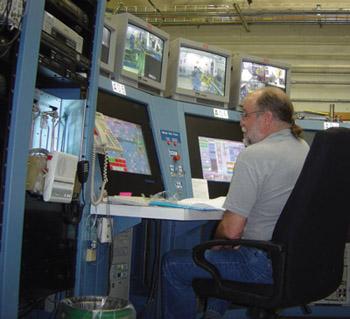 The JASPER control room is located in an area adjacent to the gas gun. 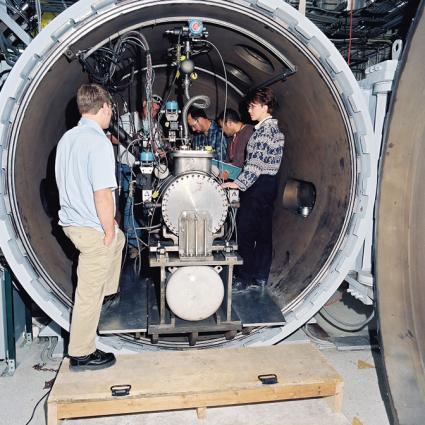 View a video of JASPER

JASPER (the Joint Actinide Shock Physics Experimental Research) is a key scientific tool for the National Nuclear Security Administration's Stockpile Stewardship Program (SSP). This program's combination of computer simulations, scientific theory and above-ground experiments has allowed the United States to maintain its nuclear deterrent for the past 20 years.

JASPER is a two-stage light gas gun, about 20 meters long, with a target chamber inside an 8-foot diameter containment chamber at the end.

Projectiles are loaded into the primary stage, which is fired with up to 8 pounds of gunpowder. The resulting detonation pushes a heavy piston into the tube filled with a gas, such as hydrogen. The piston's action heats and compresses the gas to thousands of pounds per square inch. Once the heat and pressure are high enough, a small steel rupture disk bursts, accelerating the projectile into the second stage at up to about 17,000 miles per hour (about 10 times faster than a hunting rifle).

"Think about this," says Neil Holmes, JASPER's chief scientist. "When it hits, you've got a bullet that is about the size and weight of an ice cube. It has as much kinetic energy as a Toyota Corolla going down the highway at 50mph." The impact of the bullet on the plutonium target drives the experiment.

The entire shot lasts roughly one-millionth of a second and can generate pressures on the target of millions of times atmospheric pressure (80 million pounds per square inch) and temperatures of thousands of degrees.   See video.

"We need to understand the properties of plutonium and other actinides under extremely high temperatures and pressures," says Holmes. "What makes JASPER unique is the unprecedented accuracy we achieve."

"The first time dynamic shock experiments have been accurate enough to meet the needs of the SSP," Holmes adds. "Those data are then used to study the behaviors of those materials and help create numerical tables that express our understanding of those properties. For example, we might list the temperatures at specific pressures and densities. Those tables are then used in our supercomputer simulations of nuclear weapons. And those simulations are one important element in how we can assure that the stockpile remains safe and reliable."

When the front plate of the projectile -- typically a metal like aluminum or tantalum, embedded in a Lexan and polyethylene device known as a sabot (French for "shoe") -- hits the plutonium target, JASPER's diagnostic equipment can accurately measure the resulting shock wave to a data uncertainty that is typically better than 0.5 percent.

At the conclusion of each test, the inner target chamber remains sealed, and the entire chamber is removed and sent for appropriate hazardous waste disposal.

The first JASPER shot was conducted on March 19, 2001. Of the 100 shots that have been executed, 41 have investigated plutonium material properties, while the other shots supported those experiments by rigorously testing target design, innovative measurement methods and gun performance.

A key finding involved the aging of plutonium, a manmade element first produced during the Manhattan Project. Many of its properties remained unknown for decades, and even today, are not completely understood.

As a radioactive element, plutonium undergoes self-irradiation that can lead to corrosion and changes in composition and dimensions that alter the properties. For years, physicists were worried that these issues could possibly affect a weapon's performance after decades in storage.

JASPER made essential experimental contributions to a large body of scientific work that helped to alleviate those concerns, and in fact, indicated that plutonium can be viable in excess of 100 years.

"JASPER and the JASPER team have not only produced the largest data return on plutonium of any experimental facility, they have done it for the lowest cost per data point, by far," says Bruce Goodwin, principal associate director for the Weapons and Complex Integration Directorate at LLNL. "It is a remarkable facility and achievement. I look forward to JASPER and this team completing the map-out of the physical properties of plutonium for the sustainment of the US nuclear deterrent."

JASPER's 100th shot, on Sept. 25, was the first of its kind at JASPER, and in the nuclear weapons complex.

In this experiment, JASPER researchers measured how the velocity of the sample responds to the impact, and also how the light emitted from the surface of the plutonium varies with that velocity. Measuring the light is a real challenge, and results from a collaboration on measurement technique, instrumentation and target design between Lawrence Livermore and Los Alamos National Laboratories, and National Security Technologies (NSTec), the management and operating contractor for the Nevada National Security Site.

The Laboratory operates JASPER in conjunction with Joint Laboratory Office-Nevada (JLON), a collaboration of Lawrence Livermore, Los Alamos and NSTec.