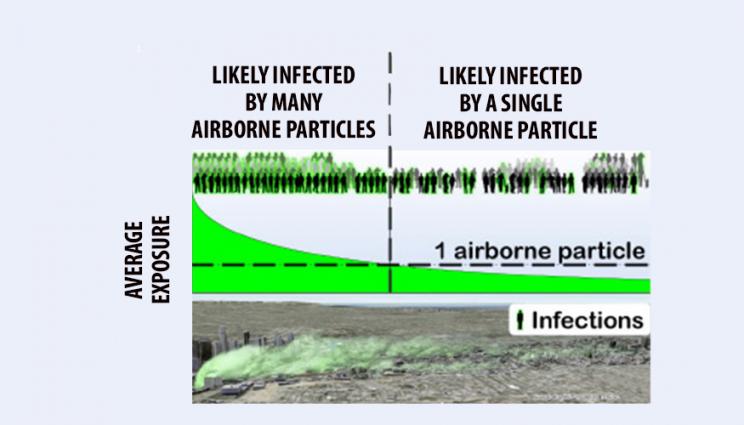 Illustration of where people can be infected by many (left) or a single (right) airborne particle. Single particle infections can occur far downwind.

For some diseases, exposure to just a single airborne particle containing virus, bacteria or fungi can be infectious. When this happens, understanding and predicting airborne disease spread can be a whole lot easier.

That’s the result of a new study by a Lawrence Livermore National Laboratory (LLNL) scientist who developed a new theory of airborne infectious disease spread. This research, which appears in the journal Applied and Environmental Microbiology, demonstrated good agreement with data from Q fever, Legionnaire’s disease and Valley fever outbreaks. The authors hope to use it to understand and mitigate COVID-19 spread.

Physics and biology models can predict airborne infectious disease spread but still have some limitations. This is partly due to physics and modeling uncertainties and partly the practical challenge of acquiring critical information needed during disease outbreaks. LLNL scientists are leveraging their extensive experience studying the movement of airborne hazards to improve understanding of airborne disease spread and to identify effective countermeasures.

According to LLNL atmospheric scientist and lead author Michael Dillon: “By understanding the physics of airborne disease transmission, we hope to offer science-based information that people can use to protect themselves and others.”

He and an independent co-researcher recently published a new theory for the case where a person is infected by a single airborne particle. This theory is then used to predict several general features of airborne disease spread.

This new approach yields the Regional Relative Risk equation, which allows for robust estimates of airborne disease spread even when limited disease outbreak information is available and there is wide variation in people’s exposures and their response to being exposed. This approach successfully modeled the relative airborne disease risk by downwind distance for seven major previously reported airborne disease outbreaks of Q fever, Legionnaire’s disease and Valley fever.

“The remarkable thing about this theory is that it leads to straightforward model predictions that do not require hard-to-get information,” Dillon said.

Future efforts could apply and validate this theory for other spatial scales, such as within a building. This would allow straightforward and robust comparisons of the risk in different environments (different rooms, buildings, mitigation measures), regardless of the disease.

“This work helps us understand the initial stages of an airborne infectious disease outbreak as well as disease spread more generally. It should be particularly helpful in understanding unexpected disease ‘sparks’ that arise far downwind from the main body of infections,” Dillon said.

These individually rare disease sparks could result in a significant disease burden if an airborne disease plume exposes many people (e.g., it drifts over a city) or if initially affected people spread the disease to others nearby.

Since the theory can predict absolute airborne infection risks, it also might guide environmental clean-up efforts, — i.e., how clean is clean enough — even in the case where the relationship between the level of exposure and infection rates is not well-understood.

The research was funded by the Department of Energy (DOE) Office of Science through the National Virtual Biotechnology Laboratory, a consortium of DOE national laboratories focused on response to COVID-19, with funding provided by the Coronavirus CARES Act.