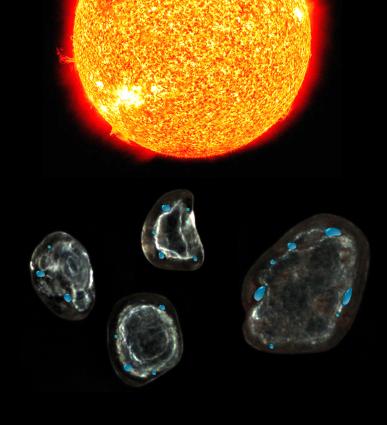 The surfaces of tiny interplanetary dust particles are space-weathered by the solar wind, causing amorphous rims to form on their surfaces. Hydrogen ions in the solar wind react with oxygen in the rims to form tiny water-filled vesicles (blue). This mechanism of water formation almost certain occurs in other planetary systems with potential implications for the origin of life throughout the galaxy.

Anne M Stark, stark8 [at] llnl.gov, 925-422-9799
Space weathering, which works similar to geological erosion on the Earth, produces water in the rims of tiny particles of interplanetary dust.

The discovery may have implications on the origins of life and sources of water throughout the galaxy. As a byproduct of star formation, water ice is the most abundant solid material in the universe. But this new source was a surprise.

Former Lawrence Livermore scientists John Bradley and Hope Ishii, now at the University of Hawaii at Manoa, took a microscopic look at the interplanetary dust particles lurking at the edge of Earth's stratosphere. They found minuscule vesicles of water hidden in the surfaces of the less than 25-micrometer flakes of dust, which are the width of a single human hair.

The dust is mostly made of silicates, which contains oxygen and metallic elements like silicon. As it travels through space, it encounters the solar wind. This stream of charged particles including high-energy hydrogen ions is ejected from the sun's atmosphere. When the two collide, hydrogen and oxygen combine to make water.

"The implications are potentially huge," Ishii said. "It is a particularly thrilling possibility that this influx of dust onto the surfaces of solar system bodies has acted as a continuous rainfall of little reaction vessels containing both the water and organics, key ingredients needed for the eventual origin of life."

The surfaces of small bodies, such as interplanetary dust particles or tiny pieces of comets and asteroids, can be eroded by the solar wind. Larger bodies that do not have an atmosphere, such as the Moon, are bombarded by both the solar wind and tiny meteorites. This form of bombardment causes a phenomenon called space weathering.

Lunar dust brought back by the Apollo missions showed for the first time the result of space weathering in the form of what have been called "rims."

The rims are the result of chemical modification of the surface of the particle, caused by high energy impacts and the continuous bombardment of the solar wind. The result is an imbalance in the chemical structure of the dust and some of the bonds of oxygen loosen and become susceptible to chemical reactions.

Bradley and his team bombarded the dust particles with charged hydrogen and helium particles to duplicate the solar wind in the laboratory. The experiments consistently found water, but only in the samples blasted by hydrogen.

The same dust is expected to be found across other solar systems.

The report appears in the Jan. 20 edition of the Proceedings of the National Academy of Sciences.