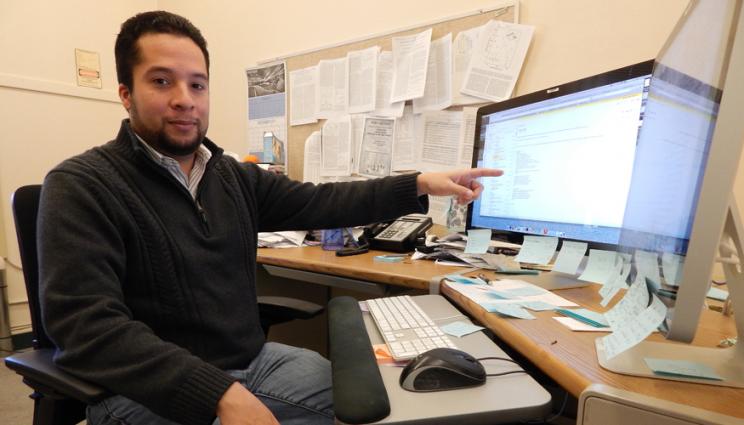 Lawrence Livermore scientist Miguel Morales has been awarded the Museum of Science and Industry’s National Early Career Hispanic Scientist of the Year for 2015.

Stumbling into physics and sticking with it

While growing up in Puerto Rico, Miguel Morales was interested in basketball and volleyball and not much else.

But that all changed when he picked up a science book.

"The idea of being an intellectual was not a popular thing," he said. "I stumbled into physics and all of a sudden there was nothing else for me. I sort of became obsessed with it and I spent all my time reading books. It made me realize I had an intellectual side."

Morales completed a double bachelor’s of science degree in theoretical physics and mathematics from the University of Puerto Rico in Mayaguez (2004). He earned his Ph.D. from the University of Illinois Urbana-Champaign in 2009, where he studied under David Ceperley, a former Livermore scientist. Before being hired at Livermore, Morales was a postdoctoral researcher at Rice University. Among his accolades, Morales won the 2014 Presidential Early Career Award for Science and Engineering (PECASE) for his pursuit of innovative science and technology and his commitment to community service as demonstrated through scientific leadership, public education or community outreach. Morales has served as a judge at the Alameda County Science and Engineering Fair.

"I started reading about Isaac Newton and Albert Einstein in an encyclopedia of science," Morales said. "I had no exposure to science before that and I was fascinated. I started buying and reading books about science and I became obsessed with math as well. I knew then that I would devote my life to science."

Using advanced computational techniques such as density functional theory and quantum Monte Carlo, Morales studies materials at extreme pressure and temperature on some of the world's most powerful supercomputers. His work is important to Stockpile Stewardship, the National Nuclear Security Administration's (NNSA) program to ensure the safety, security and reliability of the nation's nuclear deterrent without underground testing. In addition, this research also provides planetary scientists with a better understanding of planet formation.

MOSI established the National Hispanic Scientist of the Year Award in 2001 to recognize scientists, leaders and educators who promote a greater public understanding of science and motivate young students to pursue education and careers in Science, Technology, Engineering, Arts and Math (STEAM) related disciplines. In 2014, the group added a National Early Career Hispanic Scientist of the Year Award to recognize outstanding young scientists already showing potential for major contributions to society, and recognized for their ongoing achievement of scientific milestones. As of the end of 2014, 14 awardees have received national and international recognition at award ceremonies widely attended by scientists, dignitaries, public figures and by thousands of Hispanic American students.

All the recipients have shown their capabilities to serve society at-large and to be an outstanding role model for young Hispanic students. Morales will receive his award at a ceremony in October.

Morales said it’s important to let students know that scientific opportunity awaits them if they are exposed to it.

"You won’t be able to entice everyone, but if you go to the ones who have an inclination and present science in a fascinating way and show them what you can do with your knowledge, they can learn about the world we live in," he said.