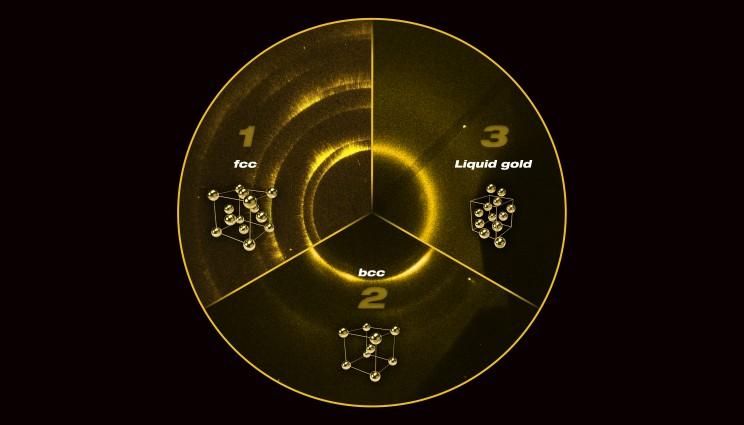 Gold is an extremely important material for high-pressure experiments and is considered the "gold standard" for calculating pressure in static diamond anvil cell experiments. When compressed slowly at room temperature (on the order of seconds to minutes), gold prefers to be the face-centered cubic (fcc) structure at pressures up to three times the center of the Earth.

However, researchers from Lawrence Livermore National Laboratory (LLNL) and the Carnegie Institution of Washington have found that when gold is compressed rapidly over nanoseconds (1 billionth of a second), the increase in pressure and temperature changes the crystalline structure to a new phase of gold. This well-known body-centered cubic (bcc) structure morphs to a more open crystal structure than the fcc structure. These results were published recently in Physical Review Letters.

"We discovered a new structure in gold that exists at extreme states — two thirds of the pressure found at the center of Earth," said lead author Richard Briggs, a postdoctoral researcher at LLNL. "The new structure actually has less efficient packing at higher pressures than the starting structure, which was surprising considering the vast amount of theoretical predictions that pointed to more tightlypacked structures that should exist."

The experiments were carried out at the Dynamic Compression Sector (DCS) at the Advanced Photon Source, Argonne National Laboratory. DCS is the first synchrotron X-ray facility dedicated to dynamic compression science. These user experiments were some of the first conducted on hutch-C, the dedicated high energy laser station of DCS. Gold was the ideal subject to study due to its high-Z (providing a strong X-ray scattering signal) and relatively unexplored phase diagram at high temperatures.

The team found that that the structure of gold began to change at a pressure of 220 GPa (2.2 million times Earth’s atmospheric pressure) and started to melt when compressed beyond 250 GPa.

"The observation of liquid gold at 330 GPa is astonishing," Briggs said. "This is the pressure at the center of the Earth and is more than 300 GPa higher than previous measurements of liquid gold at high pressure."

"Many of the theoretical models of gold that are used to understand the high-pressure/high-temperature behavior did not predict the formation of a body-centered structure – only two out of more than 10 published works," Briggs said. "Our results can help theorists improve their models of elements under extreme compression and look toward using those new models to examine the effects of chemical bonding to aid the development of new materials that can be formed at extreme states."