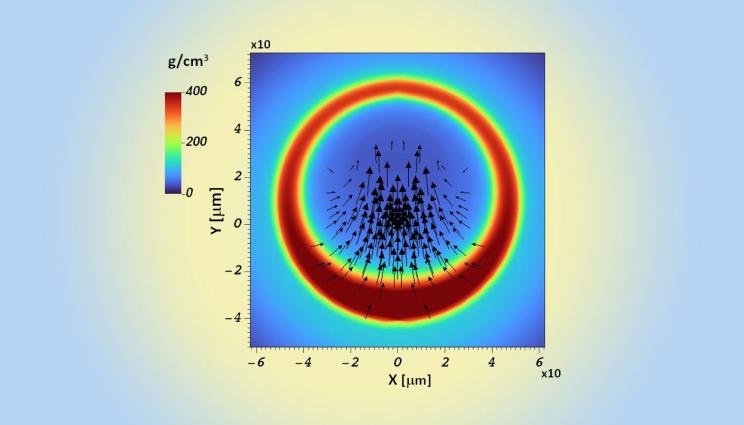 This is a HYDRA simulation of an ICF implosion with an imposed HDC shell thickness asymmetry. The result plotted here is a significantly distorted shell at peak compression (background color scale) along with the induced hotspot flow field. Image by Chris Schroeder and Jose Milovich/LLNL.

To that end, researchers from Lawrence Livermore National Laboratory (LLNL) conducted work to gain a better understanding about why this happens. The work was published in Physical Review Letters and was featured as an Editor’s Suggestion.

Daniel Casey, LLNL physicist and lead author of the paper, said the work summarizes observations of areal-density asymmetries seeded by high-density carbon (HDC) capsule thickness asymmetries, helping to illuminate one of the principal causes of a significant degradation in ICF implosions at the National Ignition Facility (NIF), the world’s most energetic laser.

“These asymmetries can decrease the energy available to heat the hotspot and reduce the confinement of that energy,” Casey said. “It is like squeezing a balloon a little harder on one side than the other, at some point the balloon will attempt to vent out the weak spots.”

The paper reveals that tiny imperfections in the capsule can grow into huge distortions of the implosion at peak compression. In fact, some recent experiments described in the paper show that sub-percent level non-uniformity (approximately 0.7 percent) in HDC capsule thickness can grow into approximately 25 percent variations in the fuel areal density and produce hotspot velocities on the order of 100 kilometers per second.

The work was conducted by radiographing the pre-shot capsules before the experiment to determine the level of non-uniformity. Then after the experiment is performed, the team looked for signs of asymmetry in the observed residual hotspot velocity and shell areal-density asymmetry.

“This work was enabled in part by advances in diagnosing implosion asymmetry through observations of the hotspot velocity using neutron spectrometry,” Casey said. “Along with advances in measuring shell non-uniformity through neutron activation anisotropies.

“It is like the analogy of the balloon that is being squeezed harder on one side, if we find the hotspot velocity is very high in some direction and aligned with significant non-uniformity of the shell, we know that some aspects of the implosion were not adequately symmetric,” Casey explained. “Then the question becomes ‘why that direction?’ ”

The team then looked at comparing the pre-shot radiographs of the capsule to the hotspot velocity. They found that capsule thickness variations deduced from the radiographs are often correlated in both direction and magnitude. This strongly suggests that the shell non-uniformities are at least one of the principal causes of asymmetry as diagnosed through the hotspot velocity.

Casey said that understanding and improving the performance of ICF implosions is an important part of the Lab’s research on the NIF.

“Now that we have found HDC shell non-uniformity to be an important degradation of implosion performance, we are working to increase the accuracy of our metrology of the shells and also to improve the manufacture of HDC to produce more uniform shells,” he said.