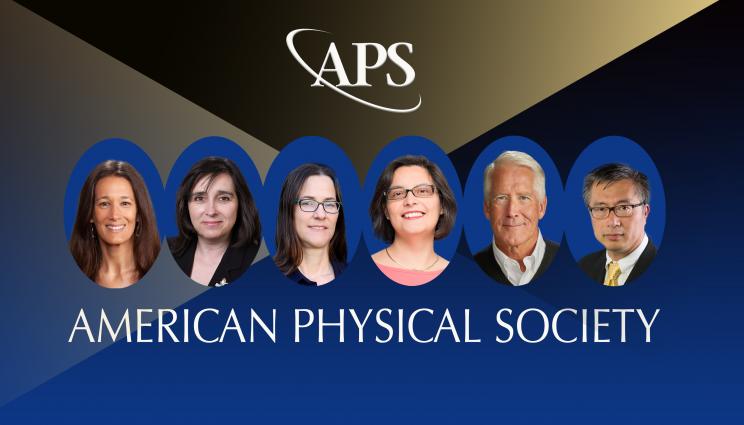 The new fellows represent a selection of physics expertise, ranging from computational physics and shock compression of condensed matter to instrument and measurement science. APS fellowships are awarded after extensive review and are considered a distinct honor because the evaluation process, conducted by the fellowship committees of individual divisions, topical groups and forums, relies on nomination and recommendation by one’s professional peers.

Félicie Albert, a physicist within the National Ignition & Photon Sciences Directorate and the deputy director for LLNL’s Center for High Energy Density Science, has worked at the Lab since 2008. She was cited for “many original contributions to the development of directional X-ray beams for probing high-energy density matter.”

“I am incredibly honored,” Albert said. “Being elected as a fellow of the APS by your peers is one of the greatest recognitions you can get as a physicist, and I couldn’t be more grateful to have been selected. I owe this success to a lot of people who have supported me and mentored me throughout my career, to my collaborators and to many of my colleagues at the Lab with whom I am incredibly lucky to work. I really look forward to continuing the research that got me here today.”

Her areas of expertise include the generation and applications of novel sources of electrons, X-rays and gamma-rays through laser-plasma interaction, laser-Wakefield acceleration and Compton scattering. She has conducted many experiments using high-intensity lasers. “My dream is that these will become standard diagnostics at large laser facilities like NIF, hopefully before I retire,” she said. “This is still a long road, but I am optimistic.”

Kim Budil, the principal associate director for the Weapons and Complex Integration (WCI) Directorate, was cited for “extraordinary leadership in developing national security partnerships between laboratories, academia and governments and for promoting diversity in science.”

“It is such an honor to be part of this distinguished group,” Budil said. “I have had tremendous fortune in my career in national security science, and I have seen first-hand the power of partnerships and the critical role of diversity in sustaining science, technology and engineerng innovation and excellence. I’m focused on continuing to do my part to make progress in these areas and to make a positive impact in our world.”

Budil has a long career with the Laboratory and the University of California. She joined LLNL as a graduate student in Laser Programs in 1987 and became a postdoc in the weapons program in 1994. Over her career, she has held roles of increasing management responsibility across LLNL programs including WCI, Global Security, the National Ignition Facility and Physical and Life Sciences.

She served twice as a detailee in Washington, D.C., first at the National Nuclear Security Administration in the Office of Defense Science and then as a senior adviser to the undersecretary for Science in the Department of Energy. From 2014 until her recent selection as WCI PAD, Budil served as the vice president for national laboratories in the UC Office of the President. In this role, she was responsible for the governance and oversight of the three UC-affiliated national laboratories (LLNL, Los Alamos and Lawrence Berkeley) as well as the development of strategic partnerships between the 10 UC campuses and the laboratories. She served as an executive committee governor on the LANS and LLNS Boards of Governors and a director on the Triad National Security Board (LLNS manages the Laboratory for the Department of Energy/National Nuclear Security Administration).

She has published extensively in scientific and programmatic contexts and participated in numerous professional and community outreach activities.

Jutta Escher, a physicist in the Physical and Life Sciences (PLS) Directorate who has worked at the Lab since 2002, was cited for “developing the theoretical framework required to validate the surrogate reaction method for neutron-induced reactions, and for leading the applications of these methods to address important questions in nuclear astrophysics and stewardship science.”

Escher develops theoretical descriptions of nuclear structure and reactions. She works with theorists and experimentalists in PLS, as well as with staff in other directorates.

“I am very honored to be elected as an APS fellow, and grateful for the opportunity to work on challenging problems that are important to LLNL’s programs and appreciated by the wider scientific community,” she said. “I feel very fortunate to be working in a place that makes it possible to explore cross-disciplinary problems and to engage with a diverse group of world-class scientists.”

Sofia Quaglioni, a nuclear physicist in the PLS Directorate who has worked at the Lab since 2006, was cited for “contributions to unifying theories for the structure and dynamics of light nuclei by elucidating the role of the continuum in weakly bound nuclei, and the inclusion of three-body final states and three-nucleon interactions within reaction dynamics.”

“It is heartwarming being recognized by your peers for the work you have done over the years,” she said. “All the 2019 fellows in the Division of Nuclear Physics are such a tremendous group of people. It’s a real honor to be in that class.”

Quaglioni uses high-performance computing to describe the structural and reaction properties of nuclei, starting from the constituent protons and neutrons and accurate representations of the nuclear interactions among them.

She plans to continue working in the Nuclear Data and Theory Group and at collaborating institutions to develop efficient methods and apply high-performance computing to arrive at a more fundamental understanding of continuum dynamics and reactions in light nuclei. It is important for the study of nuclear matter at the limit of stability and for improving the predictive power of astrophysics models and applications in national security.

She also is working in a team with world-class colleagues in the Nuclear Data and Theory group, Quantum Coherent Devices Physics group and the University of Trento, Italy, where they are in the process of developing an unconventional quantum computing protocol that will enable successful quantum simulations of nuclear dynamics on the present, noisy, state-of-the-art quantum processors. If successful, the work will give proof of the untapped use of quantum computing with current-day hardware and blaze a trail to obtain exact solutions of nuclear processes that span the entire chart of nuclides.

Harry Robey, a physicist in the WCI Design Physics Group, was cited for “significant advances in the understanding of complex hydrodynamics in inertial confinement fusion and high energy density plasmas, and for leadership in the design and execution of experiments on the National Ignition Facility.”

“I am honored and very grateful to have had the privilege of working with so many wonderful colleagues over the years,” Robey said.

Ye Zhou, a physicist in the WCI Design Physics Group, was cited for “seminal contributions to understanding the evolution of turbulent interfaces from the weakly nonlinear to fully turbulent regimes relevant to the micro-scales of laser experiments, and the inertial confinement fusion (ICF) to the mega-scales of supernova explosions, space physics and astrophysics.“

“I am incredibly honored and grateful to be selected as an APS fellow. It is humbling to be recognized by my peers in the plasma physics community,” Zhou said. “I have had the great fortune over the last 20 years to work with extraordinary colleagues at LLNL on increasing our understanding of turbulent flows induced by instabilities, which have important impacts on inertial confinement fusion and astrophysical flows. The strong support of LLNL and DOE has been critical to my research.”

Zhou plans to continue his work on the interplay between hydrodynamic instabilities and turbulent flows, and their effects on ICF and laser experiments carried out at the National Ignition Facility.

Election to APS fellowship is limited to no more than one half of 1 percent of APS' membership for a given year. In the past 57 years, more than 200 LLNL scientists have been elected APS fellows.