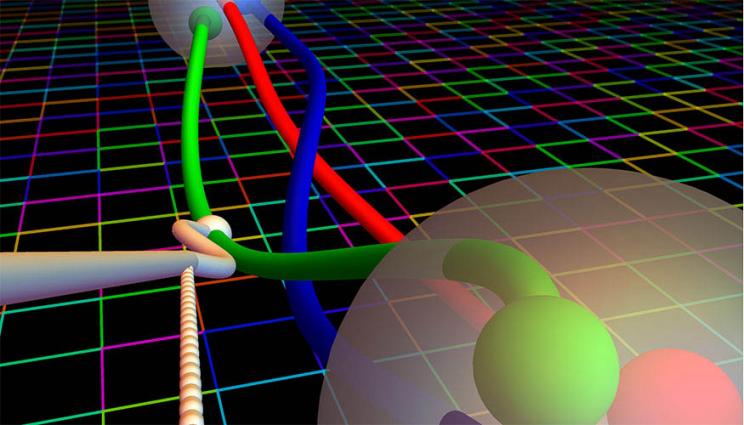 Beta decay, the decay of a neutron (n) to a proton (p) with the emission of an electron (e) and an electron-anti-neutrino (ν). In the figure gA is depicted as the white node on the red line. The square grid indicates the lattice. Image by Evan Berkowitz/Forschungszentrum Jülich/Institut für Kernphysik /Institute for Advanced Simulation

Simulations capture life and death of a neutron

Lawrence Livermore (LLNL) and Lawrence Berkeley national laboratory scientists, as well as scientists from UC Berkeley and other institutions, have simulated a "smidgen" of the universe to delve into determining the life and death of a neutron.

Experiments that measure the lifetime of neutrons reveal a perplexing and unresolved discrepancy. While this lifetime has been measured to a precision within 1 percent using different techniques, apparent conflicts in the measurements offer the possibility of learning about as-yet undiscovered physics.

The team of scientists, co-led by LLNL’s Pavlos Vranas, have tapped powerful supercomputers at LLNL and Oak Ridge National Laboratory (ORNL) to calculate a quantity known as the "nucleon axial coupling," or gA -- which is central to the understanding of a neutron’s lifetime -- with an unprecedented precision. Their method offers a clear path to further improvements that may help resolve the experimental discrepancy.

The finding plays a significant role in nuclear physics and the way the universe has evolved. The research appears online May 30 in the journal Nature.

"The proton, although it is not fundamental, is extremely stable against decay. We have never observed a proton decay and it is believed that its lifetime is longer than that of our universe," Vranas said. "This is predicted by the symmetry properties of QCD. However, the neutron, although it has similar composition and mass as the proton (it is slightly heavier than the proton), if it is left alone (if it is not part of a nucleus), it breaks apart in about 15 minutes. It decays to a proton, an electron and an anti-neutrino. This decay is called beta-decay and its rate is dictated by the axial coupling of the nucleon, gA. Therefore gA plays a central role in nuclear physics and the way our universe has evolved."

To achieve their results, the researchers created a microscopic slice of a simulated universe to provide a window into the subatomic world.

The problem is that although in principle one can use QCD to calculate gA , in practice this has proven to be a monumentally difficult task. The team used the numeric simulation known as Lattice QCD, powerful supercomputers and new techniques.

The team’s new theoretical determination of gA is based on a simulation of a tiny piece of the universe -- the size of a few neutrons in each direction. They simulated a neutron transitioning to a proton inside this tiny section of the universe to predict what happens in nature.

The model universe contains one neutron amid a sea of quark-antiquark pairs that are bustling under the surface of the apparent emptiness of free space.

"Calculating gA was supposed to be one of the simple benchmark calculations that could be used to demonstrate that lattice QCD can be utilized for basic nuclear physics research, and for precision tests that look for new physics in nuclear physics backgrounds," said André Walker-Loud, a staff scientist in Berkeley Lab’s Nuclear Science Division who led the new study. "It turned out to be an exceptionally difficult quantity to determine."

The team participating in the study developed a way to improve their calculations of gA using an unconventional approach and supercomputers at LLNL and ORNL.

With more statistics from more powerful supercomputers, the research team hopes to drive the uncertainty margin down to about 0.3 percent.