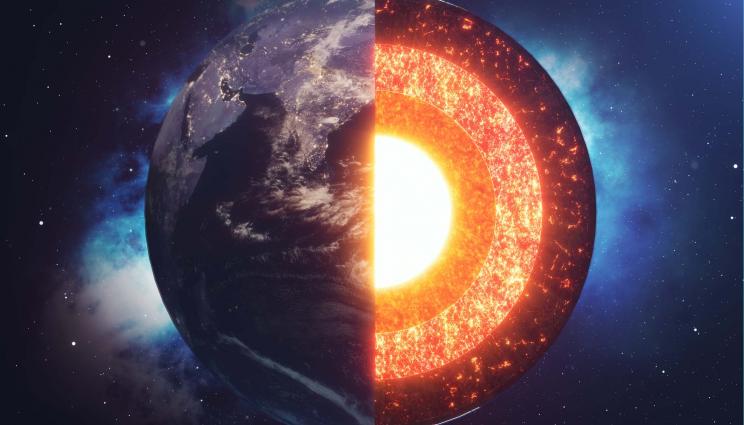 LLNL scientists are conducting experiments to better understand rocky-type planetary materials’ high temperature and pressure behavior, which is key to developing better models of Earth and other terrestrial exoplanets.

Temperature is tough to measure, especially in shock compression experiments. A big challenge is having to account for thermal transport — the flow of energy in the form of heat.

To better understand this challenge, researchers from Lawrence Livermore National Laboratory (LLNL) have taken important steps to show that thermal conduction is important and measurable at high pressure and temperature conditions in these types of experiments, according to a paper recently published in the Journal of Applied Physics. The paper’s authors are David Brantley, Ryan Crum and Minta Akin.

Brantley said that depending on how iron conducts heat at Earth’s core pressure and temperatures, the planet’s solid inner core could be around 500 million to several billion years old.

“Large uncertainties in the measured temperatures of iron at Earth’s core conditions make it difficult to constrain the planet’s temperature profile precisely,” he said. “These uncertainties have not been accounted for in previous temperature measurements, and we found that they may significantly bias previous results.”

To describe any material, researchers need the equation of state, which can be described in many ways, but the most common is pressure, volume and temperature.

“Experimentally determined and well-constrained equations of state are critical to the predictive capability and uncertainty quantification of calculations from hydrocodes,” Brantley said. “In providing realistic uncertainties of measured shock temperatures, we provide a better handle on the inherent uncertainty in our equations of state.”

“As a community, we have become quite good at measuring pressure and volume — temperature, not so much, which leaves us with an incomplete equation of state. Equations of state are used in models, but if they are incomplete, the model will be too.”

Due to the short time scales of shock compression experiments, which last less than 1 millionth of a second, the temperature is typically measured by collecting the light emitted from the hot sample via optical pyrometry. For opaque materials such as iron, light is collected only from the surface of the sample. Similar to how a cooking pot’s handle is cooler than the cooking surface, the sample’s surface is typically cooler than the interior. However, the interior or bulk temperature is needed for the equation of state. The major source of uncertainty in shock temperature measurements comes from the inference of the interior temperature from the light emitted from the surface.

In order to conduct the work, researchers performed four experiments designed to bound thermal conduction on the typical timescale of shock compression experiments.

The LiF windows served to maintain high pressure and temperature conditions and provide a transparent medium to collect light from the sample surface. Tin was chosen since it is much hotter than iron samples at similar ringdown pressures in the LiF window.

“LiF temperature is not well known, so by shocking tin and iron targets to similar pressures in the LiF window, we get comparable window temperatures for the different targets,” Brantley said.

The iron baseplate served as a heat sink for the hotter tin samples, which were sufficiently thin to allow significant diffusive thermal transport. The iron samples served as a baseline temperature history to test for equilibration of the observed tin sample temperatures.

“This observation opens the possibility of a new type of experimental platform to determine sample thermal transport parameters in shock compression experiments using the sample’s relative temperature time-history,” Brantley said. “Such a platform design could be fielded at any dynamic compression facility capable of accommodating multiple pyrometry systems.”

The second major finding was the importance of constraining systematics to get accurate temperature results. Systematic effects were found to vary in direction with a magnitude equal to or larger than experimental uncertainty. Furthermore, these systematics were model-dependent, which means just the model choice can impact the bulk temperature. It is vitally important that the final temperature results are corrected for the most significant systematic contributions, the research showed.