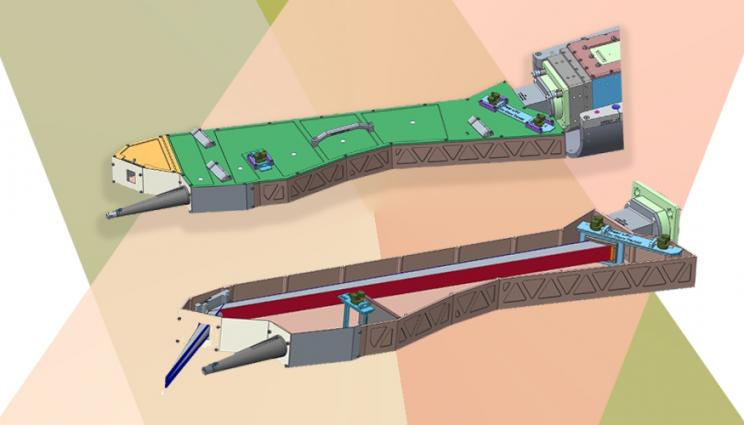 Layout of the spectrometer, which will provide high-resolution measurements of a challenging feature of high energy density matter produced by National Ignition Facility experiments. Image by Neil Ose LLNL.

The work is featured in a paper in the Review of Scientific Instruments that describes the new crystal shape being fabricated for NIF, the world’s most energetic laser.

Laser-produced high energy density plasmas, similar to those found in stars, nuclear explosions and the core of giant planets, may be the most extreme state of matter created on Earth.

PPPL previously built a spectrometer for NIF that was quite successful. The spectrometer, delivered in 2017, provides high-resolution measurements of the temperature and density of NIF extreme plasmas for inertial confinement fusion experiments, and the data obtained was presented in invited talks and peer-reviewed publications.

The instruments measure profiles of key parameters such as the ion and electron temperatures in large volumes of hot plasmas that are magnetically confined in doughnut-shaped tokamak fusion devices to facilitate fusion reactions. By contrast, NIF laser-produced HED plasmas are tiny, point-like substances that require differently designed spectrometers for high-resolution studies.

Marilyn Schneider, leader of the Radiative Properties Group in the Physical and Life Sciences Directorate at LLNL and a co-author of the paper, said this is the third designed crystal for extended X-ray absorption fine structure (EXAFS) experiments at NIF. These crystals are part of a high-resolution spectrometer named HiRAXS, which is described in another paper in Review of Scientific Instruments. LLNL co-authors of this paper include Stanislav Stoupin, Daniel Thorn, Neil Ose, Yuan Ping, Federica Coppari, Bernard Kozioziemski, Andy Krygier, Hong Sio, Jay Ayers, Philip Efthimion, and Schneider. PPPL co-authors include Lan Gao, Ken Hill, Manfred Bitter and Brian Kraus.

The spectrometer examines copper, tantalum and now lead EXAFS. The X-ray energy gets higher from copper to tantalum to lead, and the signal to noise gets lower, so there was a need to optimize the spectrometer design.

The collaboration will move to NIF in October when the new crystal is scheduled for testing there, with researchers at both laboratories eagerly awaiting the results.

“Experiments at NIF that measure the EXFAS spectrum at high X-ray energies have had low signals,” Schneider said. “The spectrometer design described in the paper concentrates the low signal and increases the signal-to-noise ratio while maintaining the high resolution required for observing EXAFS.”