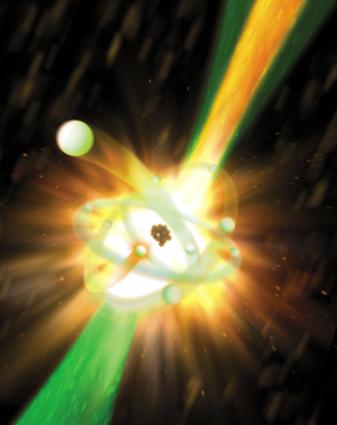 Lab scientists and international collaborators have created the shortest, purest X-ray laser pulses ever achieved, fulfilling a 45-year-old prediction and ultimately opening the door to new medicines, devices and materials.

"X-rays give us a penetrating view into the world of atoms and molecules," said physicist Nina Rohringer, a former LLNL postdoc, now a group leader at Max Planck Society's Advanced Study Group. She collaborated with researchers from SLAC, LLNL and Colorado State University.

The new laser fulfills a 1967 prediction, which proposed that X-ray lasers could be made by first removing inner electrons from atoms and then inducing electrons to fall from higher to lower energy levels, releasing a single color of light in the process. But until 2009, when LCLS turned on, no X-ray sources were powerful enough to create this type of laser.

To make the atomic X-ray laser, LCLS's powerful X-ray pulses -- each a billion times brighter than any available before -- knocked electrons out of the inner shells of many of the neon atoms. When other electrons fell in to fill the holes, about one in 50 atoms responded by emitting a so-called hard X-ray, which has a very short wavelength. Those X-rays then stimulated neighboring neon atoms to emit more X-rays, creating a domino effect that amplified the laser light 200 million times.

"This work presents a big advance in the quest for shorter wavelength lasers," London said. "In addition, the demonstration of the neon X-ray laser provides a very sensitive test of the physics of intense X-ray interaction with atoms. By comparing theoretical modeling to the observed output signals, one can pin down the basic ultrafast processes occurring in the region where the LCLS beam interacts with the gas."

In the future, Rohringer says she will try to create even shorter-pulse, higher-energy atomic X-ray lasers using oxygen, nitrogen or sulfur gases.

The research was funded by LLNL's Laboratory Research and Development program. LDRD is used to fund creative basic and applied research activities in areas aligned with the Lab's principal missions.