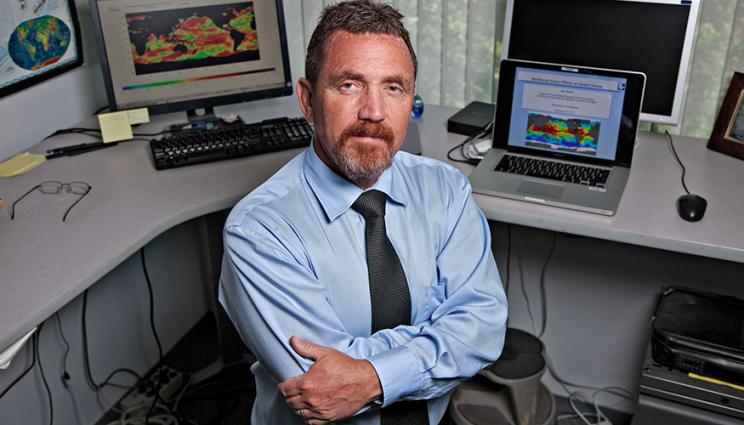 Lawrence Livermore National Laboratory atmospheric scientist Ben Santer has been selected as a fellow of the American Meteorological Society.

Renowned Lawrence Livermore National Laboratory atmospheric scientist Ben Santer has been selected as a fellow by the American Meteorological Society.

AMS membership is divided roughly evenly among the public, private and academic sectors. The opportunities for achievements that match the qualifications for fellow, namely "outstanding contributions to the atmospheric or related oceanic or hydrologic sciences or their applications during a substantial number of years," vary for each sector.

Santer’s research focuses on such topics as climate model evaluation, the use of statistical methods in climate science and identification of natural and anthropogenic "fingerprints" in observed climate records. His early research on the climatic effects of combined changes in greenhouse gases and sulfate aerosols contributed to the historic "discernible human influence" conclusion of the 1995 Report by the Intergovernmental Panel on Climate Change (IPCC). His recent work has attempted to identify anthropogenic fingerprints in a number of different climate variables, such as tropopause height, atmospheric water vapor, the temperature of the stratosphere and troposphere, ocean heat content and ocean surface temperatures in hurricane formation regions.

Santer holds a Ph.D. in climatology from the University of East Anglia, England. After completion of his Ph.D. in 1987, he spent five years at the Max-Planck Institute for Meteorology in Germany, where he worked on the development and application of climate fingerprinting methods. In 1992, Santer joined LLNL's Program for Climate Model Diagnosis and Intercomparison.

Santer served as convening lead author of the climate-change detection and attribution chapter of the 1995 IPCC report. His awards include the Norbert Gerbier-MUMM International Award (1998), a MacArthur Fellowship (1998), the U.S. Department of Energy's E.O. Lawrence Award (2002), a Distinguished Scientist Fellowship from the U.S. Department. of Energy, Office of Biological and Environmental Research (2005), a fellowship of the American Geophysical Union (2011) and membership in the U.S. National Academy of Sciences (2011).