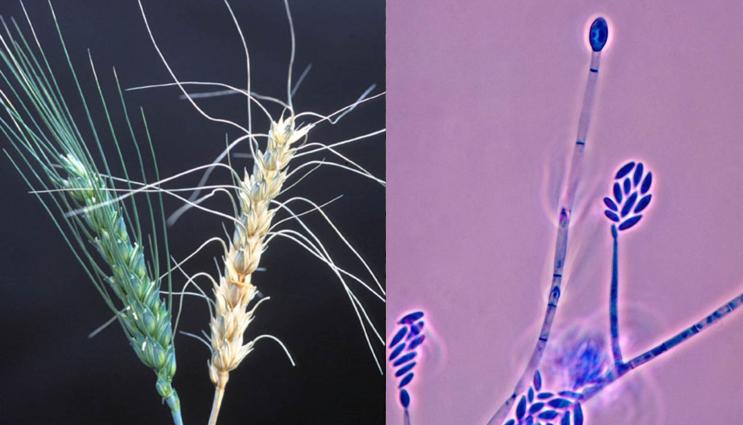 Images of the fungus Fusarium, a type of common plant pathogen that is a host for mitoviruses such as Narnaviridae. Narnaviridae are RNA viruses, and according to recent research, are highly abundant in soil.  They have significant impacts on fungal fitness. Left photo by the USDA’s Agricultural Research Service. Right photo by the CDC.

Viruses impact nearly all organisms on Earth, with waves of influence in agriculture, health and biogeochemical processes.

However, very little is known about RNA viruses in the environment, and even less is known about their diversity and ecology in soil, one of the most complex microbial systems. But Lawrence Livermore National Laboratory (LLNL) scientists have helped discover that RNA viruses, specifically, are abundant and diverse in soil, where they prey upon organisms such as insects, nematodes and fungi.

“RNA viruses are known to target eukaryotes and some bacteria, but we know very little about them, their ecology and what their roles might be in soil,” said LLNL scientist Jennifer Pett-Ridge, a co-author on a paper appearing in the Proceedings of the National Academy of Sciences. “They are one of the great unknowns in the biology world and could be important predators in soil.”

The team — which includes researchers from University of California, Berkeley — also found that the RNA viruses have genes that move around from host to virus and then to other hosts.

“They are great mobilizers of genetic information,” Pett-Ridge said. “We found that they are dynamic and different in different habitats in the soil. This means the dynamics of biotic relationships in soil are even more complicated than we’d known.”

Because the researchers are just learning about the behavior of RNA viruses, they don’t yet know the effects these viruses might have on soil biogeochemical cycles. But they suspect that if the viruses are preying on nematodes, mites, amoeba, protozoa and fungi, then they are definitely affecting the soil food webs, and thus the soil carbon cycle.

The team tracked RNA viral and host communities for 22 days in two soil environments central to carbon cycling, the rhizosphere (the narrow region of soil that is directly influenced by root secretions and associated soil microorganisms) and the detritosphere (the area in soil that surrounds older, decaying roots).

“This work is an important step toward understanding the factors that drive RNA viral communities,” said Erin Nuccio, an LLNL staff scientist and co-author on the paper. “The main hosts in the soil may be fungi and proteobacteria -- this is in contrast to the ocean where diatoms and other single cellular eukaryotes are primary hosts for RNA viruses.”

The findings greatly expand the known diversity of viruses and contribute to understanding microbial interactions in soil with major implications for carbon cycling.

Pett-Ridge said the research increased the known diversity of RNA viruses and identified which eukaryotes are most prone hosts.

Researchers from Lawrence Berkeley National Laboratory and the Innovative Genomics Institute also contributed to this work.