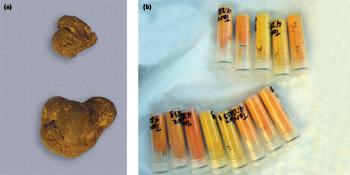 A Laboratory team has re-invented the soft X-ray spectroscopy of the highly radioactive actinides with a new, unique spectrometer.

"We demonstrated that we can directly determine and separate the electronic structure in the unoccupied states of an actinide without the need to go to a synchrotron radiation source," Tobin said.

The actinides are composed of the 15 metallic chemical elements on the periodic table with atomic numbers from 89 to 103, actinium through lawrencium.

The next step for the LLNL team is to solve a mystery that has plagued scientists for more than 65 years: What is the electronic structure of plutonium (Pu), and how does electron correlation in Pu work?

"Our goal is to resolve the Pu electronic structure enigma," Tobin said. "If we are able to put a Pu sample in the Fano/RIPES spectrometer, we should be able to do just that."

The research appears in the Oct. 14 issue of the journal, Physical Review Letters.