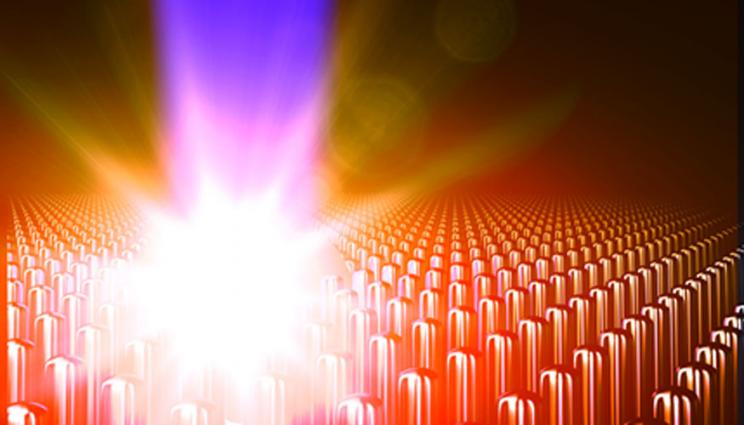 Representation of the creation of ultra-high energy density matter by an intense laser pulse irradiation of an array of aligned nanowires. Image courtesy of Reed Hollinger and A. Beardall.

Recreating conditions inside stars in the laboratory with compact lasers

Using compact lasers, a team including Lawrence Livermore National Laboratory (LLNL) scientists has created pressures more than a billion atmospheres, equivalent to the pressure in the center of a star.

These conditions of extreme pressure and energy density have previously been created in the laboratory only with the world's largest lasers, which are the size of stadiums. But in new research, Colorado State University (CSU) in collaboration with LLNL scientists have conducted an experiment that offers a new path to creating such extreme conditions with much smaller, room-sized lasers -- using intense, ultra-short laser pulses irradiating arrays of aligned nanowires.

The experiments, led by CSU Professor Jorge Rocca, accurately measured how deeply these extreme energies penetrate the nanostructures. The team made these measurements by monitoring the characteristic X-rays emitted from nanowire arrays, in which the material composition changes with depth.  Based on extrapolation from these experiments with numerical modeling, it is predicted that even higher pressures — by a factor of 100 -- can be created by using higher intensity lasers in the future.

LLNL scientists specifically helped with the setup of the experiment and with the numerical models that relate the pressure and energy density achieved in both the current and proposed higher-pressure experiments.

The results, published in the Jan. 11 edition of the journal, Science Advances, open a path to obtaining unprecedented pressures and energy densities in the laboratory with compact lasers. The work could open new inquiry into ultra-high energy-density physics; how highly charged atoms behave in dense plasmas; and how light propagates at ultrahigh pressures, temperatures and densities.

Creating matter in the ultra-high energy-density regime could inform the study of laser-driven fusion, advance understanding of atomic processes in astrophysical and extreme laboratory environments and lead to efficient conversion of optical laser light into bright flashes of X-rays. The ability to create such matter using smaller facilities would make extreme plasma regimes more accessible for fundamental studies and applications.

The Lawrence Livermore team and CSU are onducting related experiments on LLNL’s Titan and Comet lasers. The goal of these experiments, funded by the Laboratory Directed Research and Development (LDRD) program, is to scale up the basic method in the current research to higher energy laser pulses (by a factor of about 100).

The research was supported by the Department of Energy’s Office of Science and the Defense Threat Reduction Agency. LLNL’s portion was funded by the LDRD program.