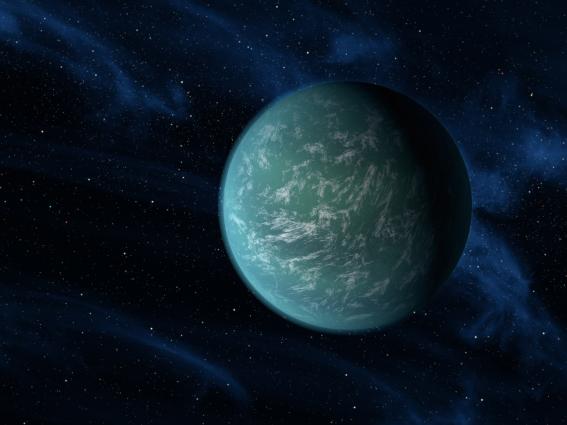 An artist's conception of planet Kepler-22b, which orbits in a star's habitable zone -- the region around a star where liquid water, a requirement for life on Earth, could persist. The planet is 2.4 times the size of Earth. Image courtesy of NASA

Putting the squeeze on planets outside our solar system

LIVERMORE, Calif. -- Just as graphite can transform into diamond under high pressure, liquid magmas may similarly undergo major transformations at the pressures and temperatures that exist deep inside Earth-like planets.

"Phase changes between different types of melts have not been taken into account in planetary evolution models," said lead scientist Dylan Spaulding, a University of California, Berkeley graduate student who conducted most of his thesis work at the Laboratory's Jupiter Laser Facility. "But they could have played an important role during Earth's formation and may indicate that extra-solar 'Super-Earth' planets are structured differently from Earth."

Melts play a key role in planetary evolution. The team said that pressure-induced liquid-liquid phase separation in silicate magmas may represent an important mechanism for global-scale chemical differentiation and also may influence the thermal transport and convective processes that govern the formation of a mantle and core early in planetary history. Liquid-liquid phase separation is similar to the difference between oil and vinegar -- they want to separate because they have different densities. In the new research, however, the researchers noticed a sudden change between liquid states of silicate magma that displayed different physical properties even though they both have the same composition when high pressure and temperatures were applied.

The team used LLNL's Janus laser and OMEGA at the University of Rochester to conduct the experiments to achieve the extreme temperatures and pressures that exist in the interiors of exoplanets -- those objects outside our solar system.

In each experiment, a powerful laser pulse generated a shock wave while it traveled through the sample. By looking for changes in the velocity of the shock and the temperature of the sample, the team was able to identify discontinuities that signaled a phase change in the material.

"In this case, the decay in shock-velocity and thermal emission both reverse themselves during the same brief time interval," Spaulding said.

The team concluded that a liquid-liquid phase transition in a silicate composition similar to what would be found in terrestrial planetary mantles could help explain the thermal-chemical evolution of exoplanet interiors.

The research appears in the Feb. 10 edition of the journal, Physical Review Letters.

The work was funded by the National Nuclear Security Administration, the National Science Foundation and the University of California.