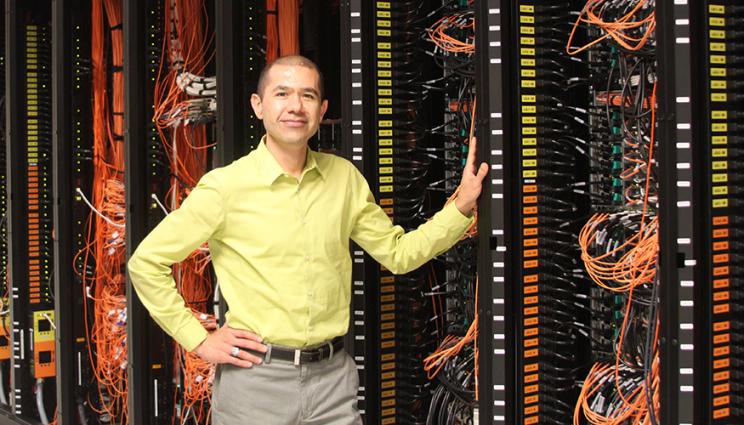 One of the premier computer science conferences in the world recently recognized Lawrence Livermore National Laboratory (LLNL) researcher Edgar A. León and his collaborators Bo Li and Kirk Cameron from Virginia Tech University with the Best Paper award for their modeling work on parallel performance.

The technical program co-chairs at the 26th International ACM Symposium on High-Performance Parallel and Distributed Computing (HPDC) handed the Karsten Schwan Best Paper award to the group for their paper entitled, "COS: A Parallel Performance Model for Dynamic Variations in Processor Speed, Memory Speed and Thread Concurrency." It describes an analytical model of computational performance called Compute-Overlap-Stall (COS), which accurately captures the combined effects of dynamic variations posed by different operating modes on execution time. Understanding these effects may play a key role in helping future high-performance systems meet the challenging demands of parallel scientific applications.

"In the past, researchers have modeled the overlap of compute and memory performance into either compute time or memory stall time, which results in inaccuracies in an environment with multiple dynamic operating modes," León explained. "The overlap is so complex that it must be modeled separately. With COS, we now have a model that allows each term to be modeled independently, which can be used to improve performance and energy efficiency."

León said future analytical models may use COS to enable better understanding of complex computing systems like Sierra, LLNL’s next flagship supercomputer, expected to be operational in 2018.

"It is a great honor to receive the Karsten Schwan award," Leon said. "We’re thrilled that the work was recognized by such a prestigious conference."