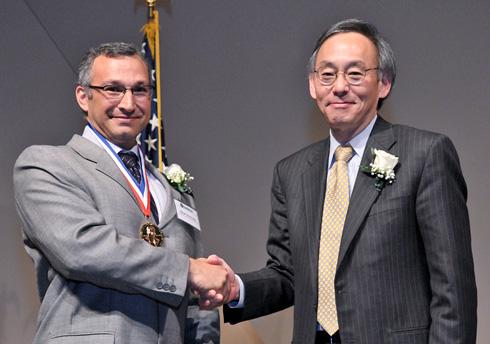 Hurricane was honored for his work at the Laboratory in national security and nonproliferation for the National Nuclear Security Administration (NNSA).

The award recognizes mid-career scientists and engineers for exceptional contributions in research and development supporting the Department of Energy/NNSA and its mission to advance the national, economic and energy security of the United States.

Hurricane is a program element leader dealing in thermonuclear secondary design in the Weapons and Complex Integration (WCI) Principal Directorate. Although much of his work is classified, he has led a multi-disciplinary team that worked on a difficult technical issue involving two vastly different areas of physics. "We were able to sort out the issues and form a solution," he said.

The E.O. Lawrence Award — named for the same physicist who co-founded Lawrence Livermore — comes with a citation signed by Chu, a gold medal bearing Lawrence's likeness and $50,000.

For more, view the related story.