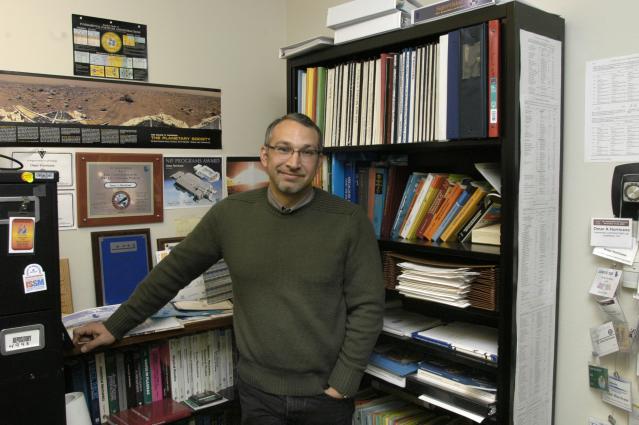 Hurricane is being honored for his work in national security and nonproliferation at the National Nuclear Security Administration’s Lawrence Livermore National Laboratory.

The award honors mid-career scientists and engineers for exceptional contributions in research and development supporting the Department of Energy/National Nuclear Security Administration and its mission to advance the national, economic and energy security of the United States.

Hurricane is a program element leader dealing in thermonuclear secondary design in the Weapons and Complex Integration (WCI) directorate. Although much of his work is classified, he has led a multi-disciplinary team that worked on a difficult technical issue involving two vastly different areas of physics. "We were able to sort out the issues and form a solution," he said.

"I personally worked on aspects of this problem as a weapons designer nearly 30 years ago and initiated technical efforts to resolve this anomaly when I was the thermonuclear design leader," Miller said. "For years, the search for a physics-based model has failed due to the complexity of the physics. As a weapons designer and the project leader for several U.S. stockpile systems in the 1980s, I am very aware of the tremendous technical challenge and difficulty associated with this anomaly…"

"On behalf of the Laboratory, I want to congratulate Omar for his work and his dedication. This is truly an honor for him as well as our Lab," Miller added.

Further praise came from WCI Principal Associate Director Bruce Goodwin, who added, "Dr. Hurricane’s efforts resulted in the development of a consistent, science-based understanding and implemented a physics-based predictive model to simulate warhead performance across a wide-range of stockpile regimes."

"I’m honored to be receiving this award from Steven Chu," said Hurricane, "not only because he is the Secretary of Energy, but also because he is a Nobel laureate."

Hurricane is quick to point out that many people contributed to the project over the past decade. The team not only needed to identify and understand the key physical processes involved, but then had to build computational tools to make predictions about the physics, and finally conduct experiments to validate their theories.

He compared the process to understanding gravity.

Realizing that gravity is what holds planets in their orbits is a step forward that directs your thinking, he explained. The second step is to build the mathematical models that predict how planets orbit the sun. Checking the mathematical models against observation is the final step. All three steps are important and are required to say that you’ve understood and solved the problem.

Hurricane, 41, came to LLNL 11 years ago from the University of California at Los Angeles.

This latest award — named for the same physicist who co-founded Lawrence Livermore National Laboratory — comes with a citation signed by the Secretary of Energy, a gold medal bearing the likeness of Ernest Orlando Lawrence, and $50,000.