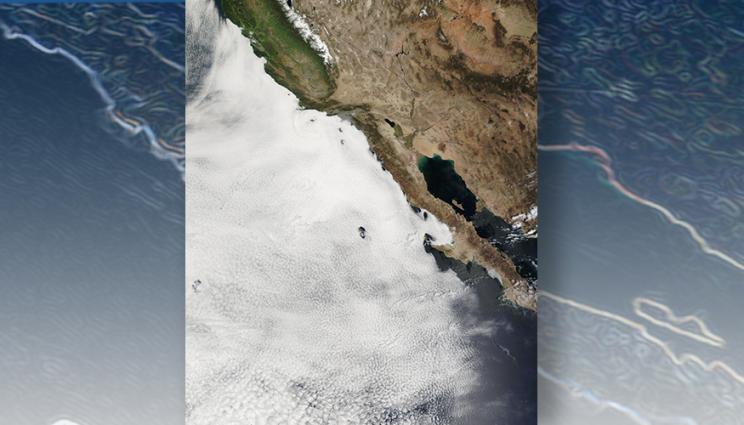 Marine stratocumulus clouds along the California and Baja California coastlines, as revealed by a NASA satellite. These and other low-level clouds are widespread over the global oceans. LLNL researchers have found that global warming causes low clouds over the oceans to decrease, leading to further warming. Image courtesy of NASA.

A new analysis of satellite cloud observations finds that global warming causes low-level clouds over the oceans to decrease, leading to further warming. The work, led by researchers at Lawrence Livermore National Laboratory (LLNL), in collaboration with colleagues from Scripps Institution of Oceanography and the NASA Langley Research Center, appears online in Nature Climate Change.

The analysis of satellite observations helps to reduce a long-standing climate change uncertainty: How will marine low-level clouds evolve as the planet heats up, and how will this feed back on warming? These clouds, such as the stratocumulus clouds responsible for the often gloomy conditions of San Francisco summers, are widespread over the global oceans and strongly cool the planet by shading the surface from sunlight. The new study finds that, overall, this cooling effect will be modestly reduced as the concentration of carbon dioxide (CO2) in the atmosphere increases. The warming initially caused by increasing CO2 gets an extra push from reductions in clouds — an amplifying feedback.

“We found that low clouds will likely amplify global warming, but the effect of this positive feedback is more muted compared to previous understanding,” said Tim Myers, LLNL climate scientist and lead author of the study.

The reason for the more muted effect? Regional differences in the response of low clouds to warming.

The researchers then determined what their new low cloud feedback value means for climate sensitivity, the planetary warming resulting from a doubling of CO2. They found that climate sensitivity is likely (two-thirds chance) between 2.4 and 3.6 °C (4.3 and 6.5 °F), a lower and narrower range than in previous estimates.

Their results point to some key deficiencies in global climate models, which produce widely varying responses of marine low clouds to warming, in large part because they cannot directly simulate the small-scale physical processes controlling the clouds’ behavior.

To test their method, the researchers turned to a highly unusual and extreme sea-surface warming event, or “marine heatwave,” observed in the northeast Pacific Ocean in 2015.

“We showed that we could accurately predict the cloud changes detected by satellites during the marine heat wave, so we are confident we can predict how the clouds will respond to global warming,” Myers explained.

Other LLNL researchers include Stephen Klein and Peter Caldwell. LLNL scientists collaborated with Scott at NASA Langley Research Center and Joel Norris at Scripps Institution of Oceanography. Work at LLNL was funded by the Department of Energy’s Office of Science.