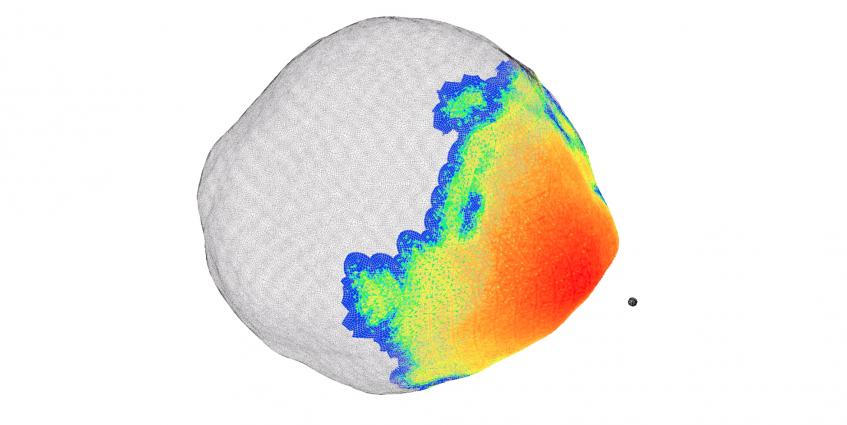 A supercomputer simulation by LLNL physicist Mike Owen illustrates how a 1 megaton nuclear detonation could impart enough energy onto the surface of the massive asteroid 101955 Bennu to nudge it off course, if it were to be on an Earthbound trajectory. The black dot is the simulated detonation location, around 100 meters from the surface at the equator. The colors show where X-rays would heat a thin layer of surface material. Blue areas would be heated, but not enough to eject material. All other colored areas would deposit enough energy to eject surface material and alter the asteroid’s velocity and trajectory.

An interagency team of researchers led by Lawrence Livermore National Laboratory (LLNL) has completed the first ever in-depth investigation into how an asteroid would respond to a nuclear deflection attempt. The research was published online in Acta Astronautica and will appear in print in early 2020.

The focus of the investigation was 101955 Bennu, a massive asteroid that has a remote chance of crossing paths with Earth more than a century from now. While the researchers aren’t concerned with a Bennu collision, the large asteroid does present an ideal subject for a comparative study of how effective different deflection technologies might be. It is the second examination of deflection technologies using Bennu as a test case. See the video.

The first Bennu case study found that a kinetic impactor — similar to using a spacecraft as a battering ram — would not be effective at deflecting a Bennu-class asteroid. This second case study, however, found that a standoff nuclear impulse would be effective in deflecting Bennu and protecting life on Earth.

“The whole purpose of studies like this is to help us shorten the response timeline if we were to see something coming at us,” said physicist Megan Bruck Syal, who is the LLNL planetary defense team lead and an author on the paper. “We don’t want to have to scramble to figure out whether to use an impactor or a nuclear device on a particular asteroid. These studies help us define those thresholds.”

Kinetic impactors would be the preferred approach if an Earth threatening asteroid were to ever be spotted. However, the effectiveness of impactors decreases as an asteroid’s size increases, and also as the time to impact decreases. These limitations were quantified in the first Bennu case study, which found it would take between 34 and 53 impactors to make a Bennu-class asteroid miss the Earth with 10 years of lead time. The exact number would depend on the desired Earth-miss-distance and the impact conditions at the asteroid.

“The nuclear option would be the key to deflecting large asteroids,” said Dave Dearborn, LLNL physicist and lead author on the paper. “It also offers flexibility that impactors don’t. For instance, the amount of energy deposited into an asteroid with a nuclear device can be tuned by adjusting how far it is from the asteroid when detonated.”

Researchers estimate that it would take a minimum of 7.4 years before an impulse could be delivered to Bennu. This includes the time it would take to build the spacecraft, plan the mission and travel to the object. Assuming the impulse was successfully delivered, changing its velocity slightly, it would take many years for the small change in speed to accumulate into a sufficient change in trajectory.

Bennu’s highly constrained orbit would lend multiple decades of lead time, if it were to end up on an Earth-bound orbit. But much more uncertainty exists for other objects that do not regularly pass close enough to Earth for radar observations. There are more than 20,000 near-Earth objects (NEOs) found by NASA so far, and scientists estimate that this is just a fraction of the total NEO population. A U.S. Congress-defined goal to discover and track the orbits for 90 percent of NEOs greater than 140 meters in diameter is likely years from completion. An update reported by astronomer Alan Harris at a recent Planetary Defense Conference puts the estimate at approximately 37 percent.

“Time would be our No. 1 enemy,” Bruck Syal said. “That’s why it’s critical that we advance our ability to detect threats through future space-based telescopes like NEOCam, which would be dedicated to hunting down NEOs. We also want to shorten the timeline for making a mitigation decision and launching a deflection mission. The chances of a Bennu-class collision appear slim now, but they aren’t zero and the consequences could be devastating if we aren’t able to act in time. In the end, our ability to protect people and critical infrastructure on Earth could come down to how ready we are to respond quickly.”