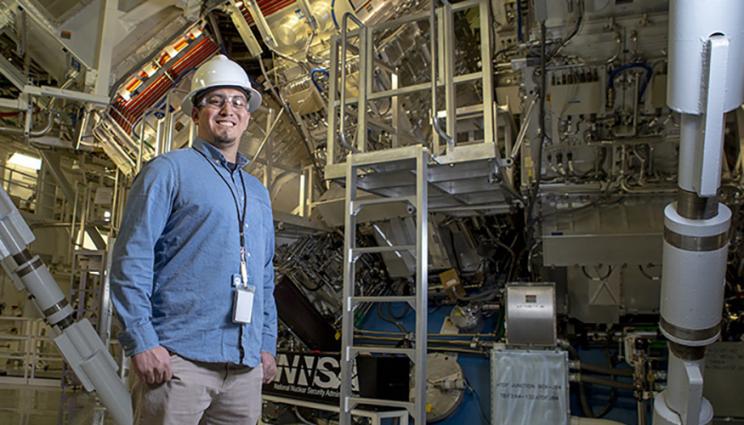 It’s been more than 10 years since John Ruiz, a mechanical designer in the National Ignition Facility’s (NIF) Facilities and Infrastructure Systems group, left the Army. But last summer, he found himself transported back to one of the most harrowing days of his Army career at the Medal of Honor ceremony for his former squad leader, Staff Sgt. David G. Bellavia.

Ruiz was a senior at Tracy High School during 9/11. That event, and his family’s long history of military service, drove him to enlist in 2002 just after graduation. “I went into the infantry, much to the dismay of my family. I wanted to be on the front lines,” he says.

Bellavia was his team leader on a peacekeeping mission in Kosovo and was promoted to staff sergeant just before the unit deployed to Iraq in 2004.

“He’s hyper-focused, very intelligent and a bit of a perfectionist,” says Ruiz. “He was very hard on us. He wanted us to be the very best that we could be. Ultimately, that paid off because we were put into very compromising situations. It’s during those times that you are thankful for the countless hours of drilling and training.”

During the Second Battle of Fallujah, also known as Operation Phantom Fury, Bellavia led his squad in clearing a block of buildings to search for hidden insurgents. Inside the 10th house, they found them.

“We had been in-country for over nine months and been involved in every major battle up to that point,” recalls Ruiz. “We were tired. While in the city we were on 75 percent security, meaning 75 percent of the unit was on duty at any given time, so we were lucky to get two to three hours of sleep a night. This was the end of a very long couple of days. It was the last house we were going to check that day.”

As the squad entered the house, they immediately came under machine-gun fire from insurgents hiding under a stairwell. Other insurgents began firing through a window, wounding several members of Bellavia’s squad and effectively trapping them. Recognizing the urgency, Bellavia charged, firing on the enemy until they were forced to take cover, allowing the soldiers to move out of the house.

While his squad reorganized, Bellavia single-handedly cleared the house. “We were fortunate to get out without any casualties,” says Ruiz. “It was chaotic, but we were prepared. Between the rigorous training, combat experience and David Bellavia’s leadership, we were ready.”

Ruiz completed his first tour in Iraq a few months after the Battle of Fallujah. He reenlisted and planned on making the Army his career, but a physical exam revealed he had sustained severe hearing loss.

“It was enough that I couldn’t return to the front line,” he says. “I was given the option to reclassify into another military occupational specialty or leave the Army. I loved the infantry, so I decided to leave the military.”

He has no regrets about leaving. “I scratched that itch. I enjoyed what I did, I was good at it. I didn’t see any reason to leave, but when the options were presented, I knew it was time for something new.”

After his discharge, Ruiz worked for several engineering firms and ended up at the BNSF Railway Company in the mechanical division. He enjoyed the work but was ready to take his career to the next level. He began taking welding classes at Las Positas College, where he learned about the Engineering Technology Program for Veterans, known as Vets to Tech.

Established in 2014, Vets to Tech is a collaboration between LLNL, Las Positas College, the Alameda County Workforce Investment Board and the nonprofit Growth Sector to create a workforce pipeline for veteran students through skills training, paid internships and a gateway to future employment (see “Lab honored for Vets to Tech program”).

During the 24-month program, the cohorts take classes in higher math, engineering and manufacturing. They’re required to maintain a 3.0 programmatic GPA and go through an interview process to earn a summer Lab internship. Of the 36 graduates of the program, 33 now work at LLNL.

“I never dreamed I’d have the opportunity to work at the Lab,” Ruiz says. “I thought you had to be a postdoc to work there. As soon as I took a tour and saw the types of programs and the research being performed, I was immediately interested and I wanted to be a part of it.”

He interned in NIF’s Optics Processing Systems group, graduating in 2017. The following year his dream came true when he returned to NIF as a mechanical designer.

“I make 3D models of mechanical components, assemblies or upgrades to the NIF,” he says. “I love it. I love seeing something go from an idea to an actual physical part.”

Ruiz credits Vets to Tech with helping him refine the skills he gained in the Army and from his post-military jobs. “They taught me how to apply the leadership skills and grow my knowledge in math, technology and writing.”

His advice to other veterans is not to limit themselves.

“I think veterans tend to gravitate toward jobs that are similar to their military experience, like law enforcement and first responder,” he says. “The Las Positas veterans program showed me other avenues. Those are great careers, but there are so many other opportunities. I know I was intimidated by taking classes in math, physics and engineering.”

In June, Ruiz was one of the guests invited to Washington, D.C., to watch Bellavia’s Medal of Honor ceremony in the East Room of the White House.

“I am very thankful that the Lab accommodated me attending this once-in-a-lifetime event,” he says. “It was amazing. It was my first trip to D.C. I was blown away by the White House and the Pentagon.”

The event was both a celebration and a reunion: Ruiz had not seen most of his squad in about 15 years. They spent most of a week in D.C. and also visited Arlington National Cemetery.

“Having a reunion under those circumstances — it was incredible,” he says. “Words can’t really describe how special it was.”