An LLNL and University of Wisconsin, Madison, research team developed a diagnostic kit that is low-cost, portable, easy to use and can diagnose in about one hour. Photos by Kate Hunts/LLNL.

Finding the right treatment plan for patients who have antibiotic-resistant infections is a costly and time-consuming effort. For doctors in rural areas or developing countries, there often is no source of electricity nearby or sterile lab conditions with microbiology specialists on hand. The current standard for bacterial identification is to isolate and grow the species in an assay, which can take hours to weeks.

A research team, including Lawrence Livermore National Laboratory (LLNL) scientists and collaborators from the University of Wisconsin, Madison, developed a diagnostic kit that is low-cost, portable and easy to use. The kit, about the size of a shoebox, runs on 9 volt batteries with a soft plastic reader called a B-chip (bacteria-detection chip) that performs a recombinase polymerase amplification (RPA) assay in about one hour. The chip uses a disposable plastic assay cartridge with wells that can assess up to 16 different diseases at one time. De-gassed sample solutions self-pump into the inlet, then air is added as a barrier physically separating the reactions into the wells and prevent cross-contamination. 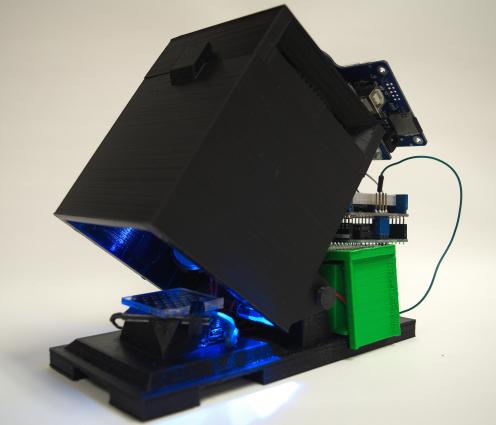 Rapid detection of bacteria is also useful for finding effective chemotherapy treatments as well as helping industries that are concerned with maintaining sanitary conditions such as manufacturing and food processing. The kit could lead to future technology that lowers the cost and increases the breadth of quality control performance.

"This demonstrated what great things can happen when chemists, biologists and bioinformatics teams come together," said Tom Slezak, LLNL team leader of Pathogen and Bioinformatics for the Global Security Directorate. "We love to work on complex problems and translate what we do in biodefense to human health. It is a wonderful example of a national lab and academic collaboration."

The research was funded by the Department of Defense and the Bill and Melinda Gates Foundation and used instrumentation provided by support from the National Science Foundation.

The research was published in February 2017 issue of the journal Applied and Environmental Microbiology.