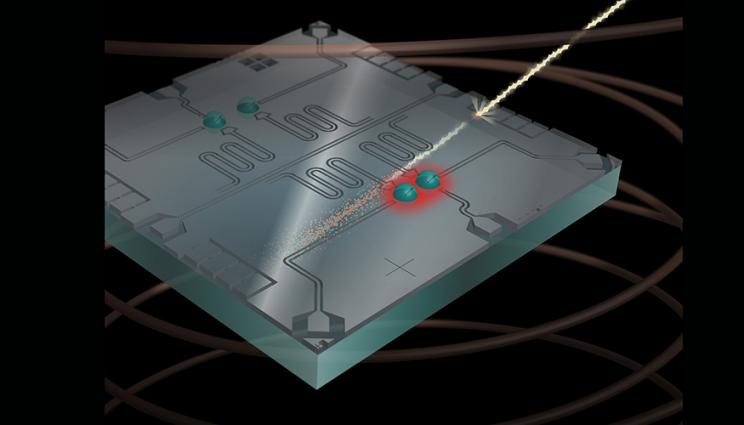 In experiments performed at the University of Wisconsin-Madison, researchers found that fluctuations in the electrical charge of multiple quantum bits, or “qubits,” can be highly correlated, as opposed to completely random and independent. The team also linked tiny error-causing perturbations in the qubits’ charge state to the absorption of cosmic rays. Illustration courtesy of UW-Madison.

Research by a Lawrence Livermore National Laboratory (LLNL) physicist and a host of collaborators is shedding new light on one of the major challenges to realizing the promise and potential of quantum computing — error correction.

In a new paper published in Nature and co-authored by LLNL physicist Jonathan DuBois, scientists examined quantum computing stability, particularly what causes errors and how quantum circuits react to them. This must be understood in order to build a functioning quantum system. Other co-authors included researchers at the University of Wisconsin-Madison, Fermi National Accelerator Laboratory, Google, Stanford University and international universities.

In experiments performed at UW-Madison, the research team characterized a quantum testbed device, finding that fluctuations in the electrical charge of multiple quantum bits, or “qubits” — the basic unit of a quantum computer — can be highly correlated, as opposed to completely random and independent. When a disruptive event occurs, such as a burst of energy coming from outside the system, it can affect every qubit in the vicinity of the event simultaneously, resulting in correlated errors that can span the entire system, the researchers found. Additionally, the team linked tiny error-causing perturbations in the qubits’ charge state to the absorption of cosmic rays, a finding that already is impacting how quantum computers are designed.

“For the most part, schemes designed to correct errors in quantum computers assume that the errors across qubits are uncorrelated — they’re random. Correlated errors are very difficult to correct,” said co-author DuBois, who heads LLNL’s Quantum Coherent Device Physics (QCDP) Group. “Essentially, what this paper is showing is that if a high-energy cosmic ray hits the device somewhere, it has the potential to affect everything in the device at once. Unless you can prevent that from happening you can’t perform error correction efficiently, and you’ll never be able to build a working system without that.”

Unlike bits found in classical computers, which can exist only in binary states — zeroes or ones — the qubits that make up a quantum computer can exist in superpositions. For a few hundred microseconds, data in a qubit can be either a one or zero before being projected into a classical binary state. Whereas bits are only susceptible to one type of error, under their temporary excited charge state, the delicate qubits are susceptible to two types of error, stemming from changes that can occur in the environment.

Charged impulses, even minute ones like those from cosmic rays absorbed by the system, can create a blast of (relatively) high-energy electrons that can heat up the quantum device’s substrate just long enough to disrupt the qubits and disturb their quantum states, the researchers found. When a particle impact occurs, it produces a wake of electrons in the device. These charged particles zoom through the materials in the device, scattering off atoms and producing high-energy vibrations and heat. This alters the electric field as well as the thermal and vibrational environment around the qubits, resulting in errors, DuBois explained.

“We’ve always known this was possible and a potential effect — one of many that can influence the behavior of a qubit,” DuBois added. “We even joked when we saw bad performance that maybe it’s because of cosmic rays. The significance of this research is that, given that sort of architecture, it puts some quantitative bounds on what you can expect in terms of performance for current device designs in the presence of environmental radiation.”

To view the disruptions, researchers sent radio frequency signals into a four qubit system and, by measuring their excitation spectrum and performing spectroscopy on them, were able to see the qubits “flip” from one quantum state to another, observing that they all shift in energy at the same time, in response to changes in the charge environment.

“If our model about particle impacts is correct, then we would expect that most of the energy is converted into vibrations in the chip that propagate over long distances,” said UW-Madison graduate student Chris Wilen, the paper’s lead author. “As the energy spreads, the disturbance would lead to qubit flips that are correlated across the entire chip.”

Using the method, researchers also examined the lifetimes of qubits — the length of time that qubits can remain in their superposition of both one and zero — and correlated changes in the charge state with a reduction in lifetime of all the qubits in the system.

The team concluded that quantum error correction will require development of mitigation strategies to protect quantum systems from correlated errors due to cosmic rays and other particle impacts.

“I think people have been approaching the problem of error correction in an overly optimistic way, blindly making the assumption that errors are not correlated,” said UW-Madison physics professor Robert McDermott, senior author on the study. “Our experiments show absolutely that errors are correlated, but as we identify problems and develop a deep physical understanding, we’re going to find ways to work around them.”

Though long theorized, DuBois said the team’s findings had never been experimentally proven in a multi-qubit device before. The results will likely impact future quantum system architecture, such as putting quantum computers behind lead shielding or underground, introducing heatsinks or dampers to quickly absorb energy and isolate qubits, and alter the types of materials used in quantum systems.

LLNL currently has a quantum computing testbed system, designed and built with funding from a Laboratory Directed Research and Development (LDRD) Strategic Initiative that began in 2016. It is being developed with continued support by the National Nuclear Security Administration’s Advanced Simulation & Computing program and its Beyond Moore’s Law project.

In related follow-on work, DuBois and his team in the QCDP group are studying a quantum device that is significantly less sensitive to the charge environment. At the extreme cold temperatures required by quantum computers (systems are kept at temperatures colder than outer space), DuBois said researchers observe that thermal and coherent energy transport is qualitatively different from room temperature. For example, instead of diffusing, thermal energy can bounce around in the system like sound waves.

DuBois said he and his team are focused on understanding the dynamics of the “microscopic explosion” that occurs inside quantum computing devices when they interact with high energy particles and developing ways to absorb the energy before it can disrupt the delicate quantum states stored in the device.

“There are potentially ways to design the system so it’s as insensitive as possible to these kinds of events, and in order to do that you need to have a really good understanding of how it heats up, how it cools down and what exactly is happening through the whole process when exposed to background radiation,” DuBois said. “The physics of what’s going on is quite interesting. It’s a frontier, even aside from the quantum applications, because of the oddities of how energy is transported at those low temperatures. It makes it a physics challenge.”

DuBois has been working with the paper’s principal investigator McDermott (UW-Madison) and his group to develop ways to use qubits as detectors to measure charge bias, the method the team used in the paper to conduct their experiments.

The featured work, including DuBois’ contribution, was funded by a collaborative grant between LLNL and UW-Madison from the U.S. Department of Energy’s Office of Science.