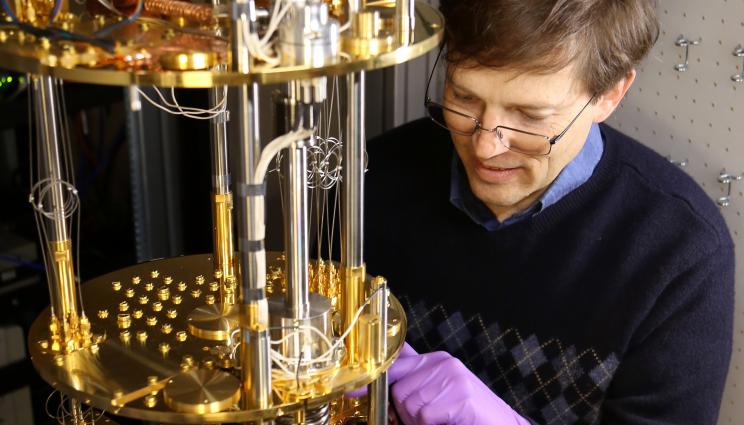 The laws of quantum physics impact daily life in rippling undercurrents few people are aware of, from the batteries in our smartphones to the energy generated from solar panels. As the Department of Energy (DOE) and its national laboratories explore the frontiers of quantum science, such as calculating the energy levels of a single atom or how molecules fit together, more powerful tools are a necessity.

"The problem basically gets worse the larger the physical system gets -- if you get beyond a simple molecule we have no way of resolving those kinds of energy differences," said Lawrence Livermore National Laboratory (LLNL) physicist Jonathan DuBois, who heads the Lab’s Quantum Coherent Device Physics (QCDP) group. "From a physics perspective, we’re getting more and more amazing, highly controlled physics experiments, and if you tried to simulate what they were doing on a classical computer, it’s almost at the point where it would be kind of impossible." 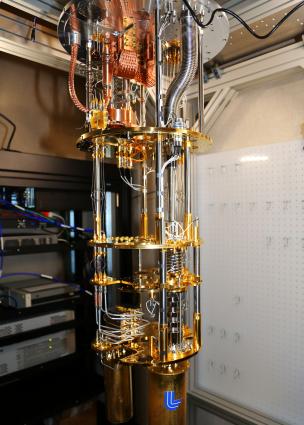 In classical computing, Moore’s Law postulates that the number of transistors in an integrated circuit doubles approximately every two years. However, there are indications that Moore’s Law is slowing down and will eventually hit a wall. That's where quantum computing comes in. Besides busting through the barriers of Moore’s Law, some are banking on quantum computing as the next evolutionary step in computers. It's on the priority list for the National Nuclear Security Administration (NNSA)’s Advanced Simulation and Computing (ASC) program,,which is investigating quantum computing, among other emerging technologies, through its  "Beyond Moore's Law" project. At LLNL, staff scientists DuBois and Eric Holland are leading the effort to develop a comprehensive co-design strategy for near-term application of quantum computing technology to outstanding grand challenge problems in the NNSA mission space.

Whereas the desktop computers we're all familiar with store information in binary forms of either a 1 or a zero (on or off), in a quantum system, information can be stored in superpositions, meaning that for a brief moment, mere nanoseconds, data in a quantum bit can exist as either one or zero before being projected into a classical binary state. Theoretically, these machines could solve certain complex problems much faster than any computers ever created before. While classical computers perform functions in serial (generating one answer at a time), quantum computers could potentially perform functions and store data in a highly parallelized way, exponentially increasing speed, performance and storage capacity.

LLNL recently brought on line a full capability quantum computing lab and testbed facility under the leadership of quantum coherent device group member Eric Holland. Researchers are performing tests on a prototype quantum device birthed under the Lab's Quantum Computing Strategic Initiative. The initiative, now in its third year, is funded by Laboratory Directed Research & Development (LDRD) and aims to design, fabricate, characterize and build quantum coherent devices. The building and demonstration piece is made possible by DOE's Advanced Scientific Computing Research (ASCR), a program managed by DOE’s Office of Science that is actively engaged in exploring if and how quantum computation could be useful for DOE applications.

LLNL researchers are developing algorithms for solving quantum simulation problems on the prototype device, which looks deceptively simple and very strange. It’s a cylindrical metal box, with a sapphire chip suspended in it. The box is kept inside a refrigerated vacuum tube (gold-plated to provide solid thermal matching) at temperatures colder than outer space -- negative 460 degrees Fahrenheit. It’s highly superconductive and faces zero resistance in the vacuum, thus extending the lifetime of the superposition state.

"It’s a perfect electrical conductor, so if you can send an excitation inside here, you’ll get electromagnetic (EM) modes inside the box," DuBois explained. "We’re using the space inside the box, the quantized EM fields, to store and manipulate quantum information, and the little chip couples to fields and manipulates them, determining the fine splitting in energies between different quantum states. These energy differences are what you use to make changes in quantum space."

To "talk" to the box, researchers are using an arbitrary wave form generator, which creates an oscillating signal-- the timing of the signal determines what computation is being done in system. DuBois said the physicists are essentially building a quantum solver for Schrödinger’s equation, the bases for almost all physics and the determining factor for the dynamics of a quantum computing system.

"It turns out that’s actually very hard to solve, and the bigger the system is, the size of what you need to keep track of blows up exponentially," DuBois said. "The argument here is we can build a system that does that naturally -- nature is basically keeping track of all those degrees of freedom for us, and so if we can control it carefully we can get it to basically emulate the quantum dynamics of some problem we’re interested in, a charge transfer in quantum chemistry or biology problem or scattering problem in nuclear physics."

Finding out how the device will work is part of the mission of DOE's Advanced Quantum-Enabled Simulation (AQuES) Testbed Pathfinder program, which is analyzing several different approaches to creating a functional, useful quantum computer for basic science and use in areas such as determining nuclear scattering rates, the electronic structure in molecules or condensed matter or understanding the energy levels in solar panels. In 2017, DOE awarded $1.5 million over three years to a team including DuBois and Lawrence Berkeley National Laboratory physicists Irfan Siddiqi and Jonathan Carter. The team wants to determine the underlying technology for a quantum system, develop a practical, usable quantum computer and build quantum capabilities at the national labs to solve real-world problems.

The science of quantum computing, according to DuBois, is "at a turning point." Within the three-year timeframe, he said, the team should be able to assess what type of quantum system is worth pursuing as a testbed system. The researchers first want to demonstrate control over a quantum computer and solve specific quantum dynamics problems. Then, they want to set up a user facility or cloud-based system that any user could log into and solve complex quantum physics problems.

"There are multiple competing approaches to quantum computing; trapping ions, semiconducting systems, etc., and all have their quirks -- none of them are really at the point where it's actually a quantum computer," DuBois said. "The hardware side, which is what this is, the question is, 'what are the first technologies that we can deploy that will help bridge the gap between what actually exists in the lab and how people are thinking of these systems as theoretical objects?'"

Quantum computers have come a long way since the first superconducting quantum bit, or "qubit," was created in 1999. In last nearly 20 years, quantum systems have improved exponentially, evidenced by the life span of the qubit’s superposition, or how long it takes the qubit to decay into 0 or 1. In 1999 that figure was a nanosecond. Currently, systems are up to tens to hundreds of milliseconds, which may not sound like much, but every year, the lifetime of the quantum bit has doubled.

For the Testbed project, LLNL’s first generation quantum device will be roughly 20 qubits, DuBois said, large enough to be interesting, but small enough to be useful. A system of that size could potentially reduce the time it takes for most current supercomputing systems to perform quantum dynamics calculations from about a day down to mere microseconds, DuBois said. To get to that point, LLNL and LBNL physicists will need to understand how to design systems that can extend the quantum state.

"It needs to last long enough to be quantum and it needs to be controllable," DuBois said. "There's a spectrum to that; the bigger the space is, the more powerful it has to be. Then there’s how controllable it would be. The finest level of control would be to change the value to anything I want. That’s what we’re aiming for, but there’s a competition involved. We want to hit that sweet spot."