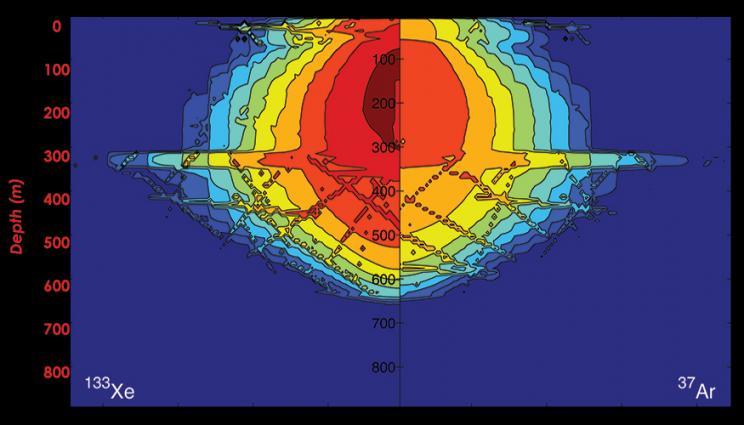 The diagram illustrates gas distribution as it leaks from the chimney of a nuclear test cavity for two different gases: Xenon-133 and Argon-37. Both of these gases have often been referred to as "smoking guns" for detecting clandestine underground explosions. These gases also percolate to the surface where they can be detected during an inspection and are occasionally released into the atmosphere where they can be detected by the International Monitoring System.

Through experiments and computer models of gas releases, Lawrence Livermore National Laboratory scientists have simulated signatures of gases from underground nuclear explosions (UNEs) that may be carried by winds far from the point of detonation.

The work will help international inspectors locate and identify a clandestine UNE site within a 1,000 square kilometer search area during an on-site inspection that could be carried out under the Comprehensive Nuclear Test Ban Treaty. Jordan recently hosted such a simulated inspection, the Integrated Field Exercise 2014 (IFE14), sponsored by the Comprehensive Test Ban Treaty Organization (CTBTO) and involving more than 40 countries, which tested some aspects of noble gas signature detection.

In addition, the technique can potentially help interpret noble gas (radioactive xenon isotopes) signals captured in the atmosphere following UNEs such as the North Korean test that occurred in January.

The research also led to the development of the LLNL Smart Sampler, which was originally designed as a research instrument to automatically capture gases reaching the surface in remote locations following release of gas tracers underground. During its IFE14 exercise, the CTBTO deployed three of these samplers, which were designed and built by Lab engineers Steven Hunter and David Ruddle at LLNL. 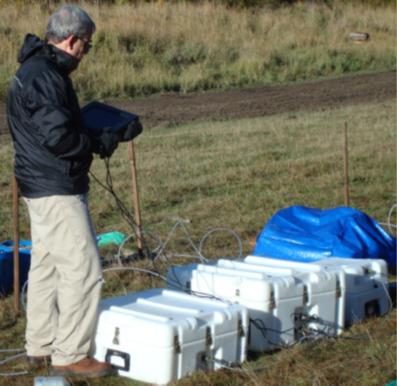 The work combines novel field experiments involving injection of gas tracers using four large compressors into an old nuclear explosion cavity and sophisticated numerical simulations that employ a new method for tracking different parent/daughter isotopes produced in the detonation cavity. The simulations use the results of the field experiment as a basis for probing the isotopic evolution and gas transport processes of a UNE.

The team, made up of scientists from LLNL and National Security Technologies (NSTec), partially reproduced the subsurface conditions following a UNE responsible for the migration of explosion gases to the surface where they can be detected locally at a test site. Such results can provide inspectors with a better idea of what to expect when they are in the inspection area searching for a suspected UNE. With LLNL computer models using information from the tracer experiment, the team was able to track the evolution of gases in the explosion cavity, which may be detected downwind thousands of kilometers away. This actually occurred after the third North Korean UNE in 2013.

"The work is novel in part because of how we did it by injecting gases into an old UNE cavity and then using computer models informed by the experiment to extend our understanding of how xenon gas evolves following the UNE," said Charles Carrigan, LLNL geoscientist and lead author of a paper appearing in the March 16 edition of the journal Nature-Scientific Reports.

Using computer models developed by LLNL physicist Yunwei Sun, the team showed that including thermally driven migration of telltale gases from the explosion cavity or chimney may substantially shorten their arrival times at the surface when compared to migration of gases caused only by atmospheric pressure fluctuations or barometric pumping. Previous research has focused on barometric pumping as the primary subsurface gas migration mechanism.

"From monitoring gases coming to the surface during the course of our pressurized field experiment, we also found that background radon gas levels were anomalously high (10 to 15 times normal) at the surface over the explosion cavity," Carrigan said.

The research indicates that the weak subsurface pressurization mimicking the thermal drive following the explosion enhanced the amount of radon that was captured. This suggests that radon anomalies could be potential indicators of hidden or clandestine UNEs that are otherwise difficult to detect during an on-site inspection. 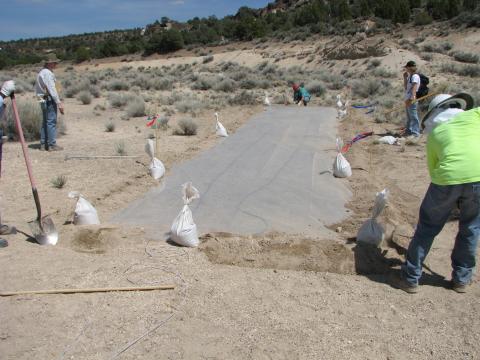 Additionally, the simulations showed that the explosion cavity or chimney behaves something like a leaky chemical reactor or pressure cooker. The gases migrating away from the cooker change the overall chemical makeup (isotopic ratios) of the gases left behind in the cooker or reactor, which continues to make new gases. The team modeled the evolution of these gases out to several months following a UNE.

"The 2013 underground nuclear explosion carried out in North Korea has allowed us some validation of our model of explosion-gas evolution," Carrigan said. "We find that the gases detected almost two months afterward in Russia are best matched by our evolutionary model for the mixture of different xenon isotopes when we assume a range of yields that is consistent with seismic estimates, less than 10 kilotons, for that event. This is a cool result as no one has suggested that isotopic ratios should depend on nuclear yield."

The research also may have applications in monitoring other heated or pressurized subsurface regimes such as in situ coal gasification, deep sequestration of supercritical CO2 and nuclear waste disposal.

Other Livermore team members include Jeffrey Wagoner and Katherine Myers along with Dudley Emer, Sigmund Drellack and Veraun Chipman from NSTec.

This work was performed as part of the multi-laboratory Underground Nuclear Explosion Signatures Experiment, which is supported by the National Nuclear Security Administration’s Office of Proliferation Detection.