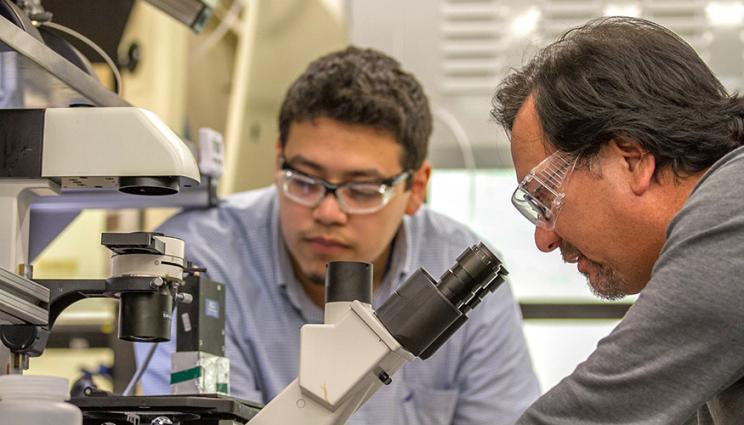 Installation of a highly advanced 3D printer for electronics at Lawrence Livermore National Laboratory has opened the door for creating miniature circuits on surfaces and substances that could never be used before.

The Optomec Aerosol Jet 500 system, which became operational in January, is capable of printing circuits with a broad range of nanomaterials, allowing engineers to manufacture conductors, semiconductors and microcircuits with an intricacy and flexibility not possible with the Lab’s previous technology.

"To be able to print electronic components in 3D is a fundamental game changer," said Chris Bishop, electronics managing supervisor in LLNL’s Materials Engineering Division (MED). "The hard part is figuring out what to focus on first."

"We’re in the process of moving toward a safer environment," Bishop said. "It’s really cool to say we’ve eliminated the hazard and have the same capability, but to have more capability in less space, it’s huge."

Previously, the smallest components created in the facility were limited to 50-100 microns. The Optomec machine can print at 10 microns and also is not limited to copper or metallic inks. It’s capable of utilizing a number of conductive and nonmetallic materials, even proteins, and printing on surfaces such as glass, plastic or kapton, a thin heat-resistant polymer. It also can print at any angle in three dimensions, meaning engineers can experiment with 3D-printed antennas, flexible circuits, components for robots and pressure and medical sensors.

"When we use it, we can print at different angles and conform it the way we want," said Dale Kurita, a senior electronics technologist. "There’s just unlimited capabilities in the future. This opens up a whole new door for people to look at electronics differently."

Electronics technologist Julian Larregui, who is figuring out how to use the software, said he was amazed by the printer’s potential.

"I can make electronics that are not only flat, but curved," Larregui said. "My mind was kind of blown. At first it was intimidating, but now that I’ve done it a few times, I’m much more confident."

MED engineers are experimenting with the machine using silver nanoparticles and will be moving toward other conductive inks in the future. They also plan to expand to different substrates and inks such as platinum, aluminum and copper.

Circuit board manufacturers and companies in the medical, weapons and aerospace industries have already shown interest in what can be done with the printer, Bishop said.

"There’s a lot of people excited about this," Bishop said. "It’s only a matter of time."

The Laboratory Directed Research and Development program funded procurement of the Optomec system.