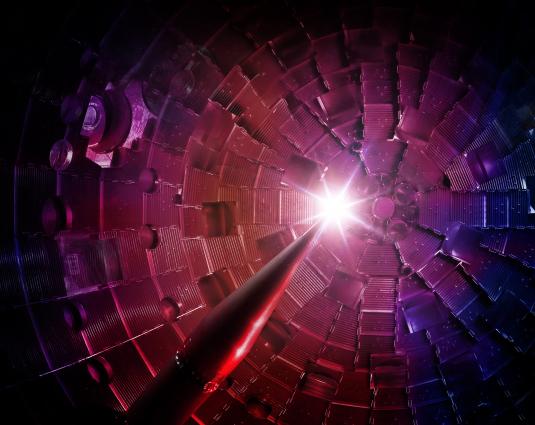 This rendering of the inside of NIF’s target chamber shows the target positioner moving into place. Pulses from NIF’s high-powered lasers race through the facility at the speed of light, and arrive at the center of the target chamber within a few trillionths of a second of each other, aligned to the accuracy of the diameter of a human hair.

LIVERMORE, California – On Sept. 18, the National Ignition Facility (NIF) performed its 400th experiment of fiscal year (FY) 2016, meeting the year's goal several weeks early. In comparison, the facility completed 356 experiments in FY15 and 191 experiments in FY14. NIF is on track to complete 415 experiments by the end of the fiscal year, more than doubling its FY14 accomplishments.

Located at Lawrence Livermore National Laboratory (LLNL), NIF is the world's largest and most energetic laser. NIF is funded by the Department of Energy’s National Nuclear Security Administration (DOE/NNSA), whose missions include ensuring the safety, security and effectiveness of the nuclear weapons stockpile. The chief mission of NIF is to provide experimental insight and data for NNSA's science-based Stockpile Stewardship Program (SSP).

The 400th shot was part of a campaign to study radiation effects on strategic system materials, conducted by NIF’s National Security Applications Program for the Department of the Navy. The increased shot rate has enabled more scientific exploration, increased innovation and faster progress on priority areas within the SSP.

"Through continued attention to efficiency and improvement, the team at NIF has made impressive progress in increasing both the shot rate and experimental access to this one-of-a-kind facility," said Lt. Gen. Frank G. Klotz (Ret.), under secretary for Nuclear Security and administrator for NNSA. "This growth – achieved on a fixed budget – further solidifies NIF’s role as a crucial tool for the Stockpile Stewardship Program and a world-class resource for learning and progress."

The more than 110 percent increase in NIF shots from FY14 to FY16 is a direct result of an efficiency study conducted in FY14. This congressionally requested 120-day efficiency study was developed in partnership with other NNSA laboratories and identified more than 80 improvements to equipment and procedures that could lead to reduced time and effort for fielding experiments, nearly all of which have been implemented.

"Meeting the commitments laid out in the 120-day study is an important achievement for team NIF and its partners," NIF Director Mark Herrmann said. "We’ve established an efficient operating baseline for NIF delivering unprecedented data and insights for the Stockpile Stewardship Program. The entire team is energized by achieving this goal and looks forward to continuing to deliver important data for the stewardship program."