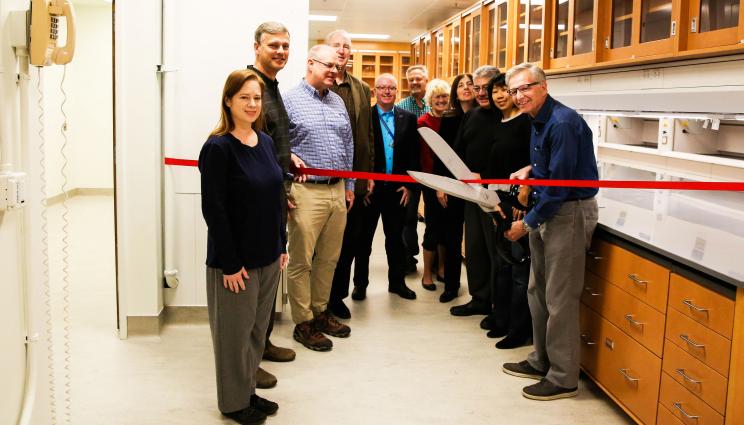 Building 151 is the latest site of extensive renovations. Construction recently finished in four laboratory spaces, combining two labs into one and updating equipment for researchers in the Nuclear and Chemical Sciences (NACS) Division of LLNL’s Physical and Life Sciences (PLS) Directorate. A wheelchair-accessible ramp also was installed on the building’s east entrance in accordance with the Americans with Disabilities Act.

A ribbon-cutting ceremony was held earlier this month to celebrate the completion of the project and to transition the laboratory back to the resident radiochemists to continue their experimental work.

Since its dedication on Sept. 9, 1967, Bldg. 151 has been Livermore’s hub of radiochemistry research for a range of national security projects. "Modernizing our radiochemistry capabilities not only helps us do our work more efficiently, it also helps attract and retain world-class radiochemists," said Mark Sutton, NACS deputy division leader for Operations.

Cliff Shang, director of Laboratory Strategic Infrastructure, added: "Many buildings at LLNL are decades old. Modernization is needed to deliver on our mission in the coming decade, specifically to handle two life-extension programs for the country and to address major certification challenges."

Funded by the National Nuclear Security Administration (NNSA), this phase of renovations began in 2016 and cost $5.1 million. (Fifty-one years ago, the 87,000-square-foot facility was built and equipped for $5.9 million.) NNSA representatives Sheila Feddis and Daniel Gonzales toured the renovated labs over the summer. Shang acknowledged NNSA’s investment in LLNL’s radiochemistry resources, stating: "NNSA is highly supportive of maintaining and extending critical capabilities to maintain the U.S. strategic deterrent."

"Radiochemistry is a foundational capability at the Lab, and it’s gratifying to see NNSA and the Department of Energy reaffirm the importance of radiochemistry to our national security mission," said PLS Associate Director Glenn Fox. "We in PLS are privileged to continue our role as stewards of that capability for LLNL, and we’re excited to see our scientists start using the new lab space."

Teams began meeting several months before, and during daily construction check-ins they itemized the steps for each task, such as the timing for moving obsolete items and subsequent handoff for disposal.

Overall, close coordination enabled the teams to adapt to changing conditions. Banuelos stated: "Legacy items above the ceiling prompted additional design and layout to install new ducting and mechanical and electrical components of the new hoods." 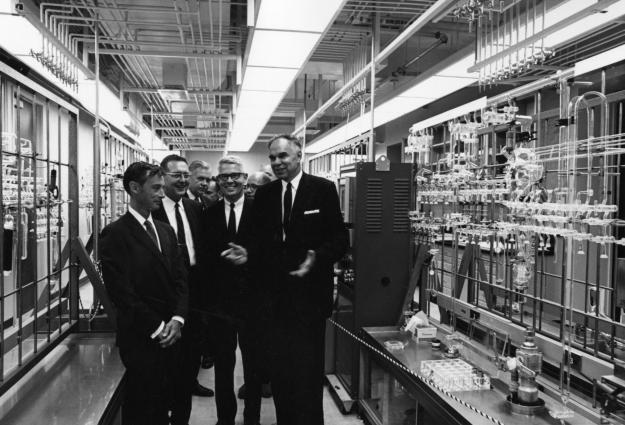 "Surprises are ever-present in an old building," said Doug Higby, the building’s facility manager. Over the years, Bldg. 151 has received numerous upgrades ranging from building systems — boiler, air handler and exhaust ventilation — to office and meeting spaces. The cleanroom has been updated, and several areas have been converted into laboratories, such as dedicated space for nuclear magnetic resonance experiments.

Unlike a home or commercial construction project, Bldg. 151 renovations pose unique challenges. Tracey Simpson, Team 2 leader for the Environment, Safety and Health department, said: "With older labs, we may not have the entire history of activities in a particular room. We sample for everything up front to obtain as much information as possible." Besides radioactivity, sampling includes checking fume hoods for metals contamination and perchloric crystals.

Higby added that Bldg. 151 could not shut down completely for the renovations. "These four labs are contiguous with other working lab spaces. While we tried to keep disruptions to a minimum, it was impossible to not impact the nearby labs at times."

Each detail of the renovated labs accommodates the highly specialized work to be performed in them. According to Dawn Shaughnessy, leader of NACS’ Nuclear and Radiochemistry Group, updated fume hoods provide researchers with improved operations using perchloric acid. "Our priorities were to modernize the labs with equipment that enables ease of work while maintaining worker safety."

These modern features came with an inconvenient tradeoff — sharing lab space with other teams during construction. Shaughnessy explained: "We had to get creative. We were quite cramped for a while, and our group was patient and communicative."

Surprises and occasional delays notwithstanding, the renovation project has been a success. Shaughnessy’s group is eager to move into the new labs and continue their vital work for NNSA.

Physical and Life Sciences at LLNL