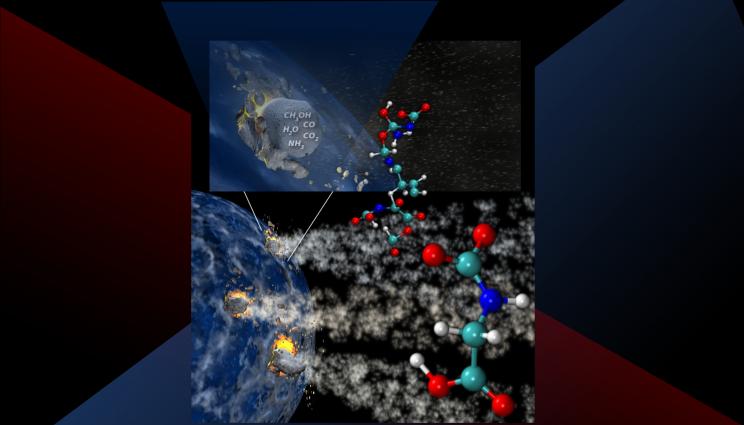 Comets contain elements such as water, ammonia, methanol, carbon dioxide and phosphorous that could have supplied the raw materials, upon impact, to jump start life on early Earth.

The incorporation of the biologically vital element phosphorus into material found in living species may have formed during impact from astrophysical bodies on early Earth.

Schreibersite is common in iron-nickel meteorites and could have contributed as much as 10 percent of the phosphorus likely present in the Earth’s early crust. In addition, the transition metal ions within the material can act as a catalyst for organic prebiotic reactivity. Of interest is its impact synthesis of phosphorylated organics on early Earth and other icy interstellar bodies.

“It’s possible that billions of years ago both prebiotic phosphorus-containing raw materials and the energy to drive chemical reactivity may have been delivered to the Earth simultaneously by the impact of these types of meteorites,” Goldman reported.

Schreibersite has been suggested as one possible source of the addition of phosphorus into prebiotic organics. Early Earth likely experienced impact events that yielded intense thermodynamic conditions that could ultimately have driven the formation of metastable organic species. This would have had high relevance during periods of heavy bombardment, where the flux of organic matter to Earth via comets and asteroids might have been as high as tens of quadrillions of kilograms per year.

“There’s reason to believe that schreibersite acted as both a source of phosphorus as well as a catalyst for essential biological phosphate production,” Goldman said.

Phosphorus is a key element in modern biochemistry. Its oxide, called phosphate ion, forms the backbone of nucleotides, the monomer units of DNA and RNA. Phosphorous’s oxide is a key component of molecules that store energy like adenosine triphosphate. It also makes up part of biological lipids. Phosphate ions can combine with calcium to form apatite, the main mineral component of bone. However, the chemical mechanisms by which phosphate could have been produced and incorporated into biological precursors on early Earth is still largely unknown.

Goldman intends to study this issue by using molecular dynamic simulations to provide an accurate description of the chemical reactivity within shock compressed schreibersite mixtures.

Previous shock synthesis studies by Goldman and others have shown that potentially life-building molecules like amino acids and peptides can be synthesized during impact events from icy materials such as comets. Similarly, meteorites are known to contain relative abundances of organic material, including alcohols, polyether and amino acids. However, the effect of phosphorus and a metal catalyst in the mix is largely unknown. The simulations in this work will focus on prebiotic synthesis from aqueous organic mixtures in the presence of schreibersite particles. The goal is to subject materials to an entire impact cycle – shock compression due to planetary impact, followed by expansion and then cooling and equilibration.

“Our goals are to create a more complete understanding of the possible elementary phosphate chemistry steps in prebiotic synthesis over the wide range of pressure-temperature conditions that likely existed on the early planet,” Goldman said.