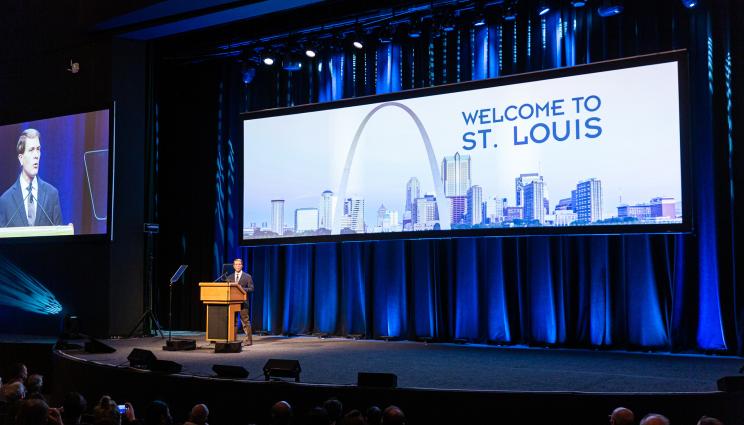 SC21 General Chair Bronis R. de Supinski opens the conference’s keynote session by welcoming remote and in-person attendees to St. Louis, noting the unique challenges of preparing a large international conference during the COVID-19 pandemic and presenting the theme for SC21 — “Science and Beyond.” Photo courtesy of SC Photography.

It was a Supercomputing conference like none other before it.

For the first time ever, the 2021 International Conference for High Performance Computing, Networking, Storage and Analysis (SC21) went hybrid, with dozens of both in-person and virtual workshops, technical paper presentations, panels, tutorials and “birds of a feather” (BOF) sessions. Under the ongoing specter of COVID-19, the sparser crowds in St. Louis compared to past SCs did not however dampen attendees’ enthusiasm for celebrating the increasing significance of high performance computing (HPC) to “Science and Beyond.”

Always a highlight of the annual event, the Top500 List of the world’s most powerful supercomputers remained relatively unchanged from the previous list released at the International Supercomputing Conference in June. LLNL’s Sierra remained third behind the Japanese Fugaku and Oak Ridge National Laboratory’s (ORNL) Summit, with five other LLNL supercomputers making the list — Lassen, Ruby, Magma, Jade and Quartz. With few changes at the top, much of the buzz surrounded supercomputers absent from the list, including two reported Chinese exascale systems and ORNL’s much-anticipated exascale machine Frontier, all of which did not submit scores on the Linpack benchmark used to formulate the list.

The press conference (and de Supinski’s welcome speech the following day) also spotlighted the 2021 ACM Gordon Bell Prize nominees, featuring groundbreaking HPC work in molecular dynamics, cosmic neutrinos, fusion energy, spectroscopy and quantum computing. Announced on Nov. 18, the prize went to a team from China for a paper on simulating quantum circuits that questioned Google’s declaration of quantum supremacy in 2019. Japanese researchers at RIKEN won the conference’s second ACM Gordon Bell Special Prize for High Performance Computing-Based COVID-19 Research, for their simulations of aerosolized COVID-19 droplets on Fugaku, the world’s No. 1 system. The work was used in Japan early on in the pandemic to inform public health about disease transmission from sneezing, coughing or talking.

On Nov. 15, panelists for the SC21 Plenary discussed the intersection of HPC and ethics, and issues ranging from data privacy and gender equity to cyberattacks and scientific reproducibility. Afterwards, the cavernous America’s Center exhibit hall — housing booths from more than 160 exhibitors — opened its doors to visitors. de Supinski toured the floor with plenary participants and other special guests before helping kick off the SC21 Student Cluster Competition.

LLNL computer scientist Kathleen Shoga chaired the competition, in which college students from the U.S. and China squared off in a 48-hour marathon, building their own computing clusters and putting them to test on real scientific problems. The competition’s award for Highest Linpack score went to China’s SUSTech Supercomputing Team, while China’s Tsinghua University Team was declared the overall winner.

The following morning, de Supinski led off the conference’s keynote session by welcoming remote and in-person attendees, noting the unique challenges of organizing a large conference — complete with all required health and safety protocols — during the constantly shifting sands of the COVID-19 pandemic, and presenting the theme for SC21.

“Our theme this year — ‘Science and Beyond’ — reflects the impact of HPC on humanity beyond traditional scientific achievements,” de Supinski said. “We’ve seen the expansion of high performance computing throughout our lives and into new disciplines. Our exhibits, presentations and panels highlight HPC’s impact on our everyday lives.”

True to the theme, the keynote speech by Vint Cerf, widely described as one of the “fathers of the Internet,” focused on how HPC could be used to gain a deeper understanding of art, literature and the humanities.

Later that day, LLNL computer scientist Maya Gokhale (attending virtually) participated in a panel for programming future HPC systems. LLNL computer scientist Harsh Bhatia presented a multi-institutional paper on a machine learning-based modeling software used to run the largest-ever multi-scale simulation of RAS-RAF protein interactions on ORNL’s Summit. The work is part of a part of the Pilot 2 project for the Joint Design of Advanced Computing for Cancer program, a collaboration between the Department of Energy (DOE) and National Cancer Institute.

“We are now pushing the fields of large multi-scale simulations into new realities,” Bhatia said.

Throughout the week, tech program sessions, panels and invited talks highlighted emerging topics, such as women in HPC, principled machine learning and efforts to improve diversity and inclusion within the HPC community — an increasing focus for SC. Other sessions addressed the growing population of students in the field, including resume tips and mindful career navigation (led virtually by LLNL software engineer Kristi Belcher).

LLNL computer scientist Todd Gamblin was particularly busy, serving as the event’s Technical Program vice chair, a presenter for the day-long tutorial on the Spack package manager, an emcee for an invited talks session on Nov. 16 and as a panelist on tools for extreme scale computing on Nov. 17 (moderated by LLNL’s Laguna).

As the tech program picked up speed mid-week, LLNL computer scientist Brian Van Essen presented a talk at the DOE exhibit booth examining disaggregation in “cognitive simulation” — the merging of HPC with artificial intelligence (AI) — and discussed the integration of AI accelerators into supercomputers Lassen and Corona as case studies. LLNL postdoc Trevor Steil virtually presented a paper on TriPoll, a prototype distributed HPC system capable of surveying triangles in massive graphs, and computer scientist Cameron Harr gave a talk at the Supermicro exhibit booth on storage systems and how Livermore Computing is using the Adaptive Storage Platform.

Following the end of the tech program, the conference concluded on Nov. 19 with several online workshops involving LLNL contributors and a panel on reproducibility in HPC with LLNL computer scientist Tom Scogland. Nearly all sessions were made available on the conference’s virtual HUBB platform and remain viewable on-demand by registered attendees. Both online and in-person attendees were able to ask questions during live-streamed sessions via Sli.do.

For a full list of Lab SC21 participants, visit https://computing.llnl.gov/about/newsroom/sc21-event-calendar.