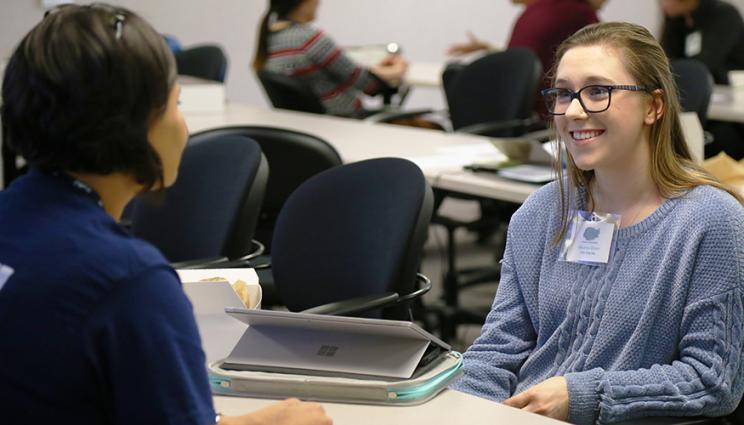 For the second straight year, the HPC Innovation Center at Lawrence Livermore National Laboratory (LLNL) played host to a Women in Data Science (WiDS) regional event on March 4, drawing in dozens of attendees from LLNL, local universities and other Bay Area national laboratories.

Livermore was one of more than 150 regional events held at sites across the globe in conjunction with the Global WiDS conference at Stanford University. The one-day conference aims to inspire and educate data scientists worldwide, regardless of gender, and to support women in the field, according to the conference website. More than 60 people (including men) registered for the Livermore event, where attendees watched a livestream of the global conference, listened to in-person speakers, engaged in a speed mentoring session with LLNL staff and heard from a panel of female scientists who discussed career development and challenges for women in the data science realm.

"The goal is to increase interactions and make connections," said WiDS Livermore Ambassador Marisa Torres. "We want to get ideas of how we can foster this kind of community building throughout the year beyond this one event…I really want people to be able to talk about each other’s research and get ideas on how to collaborate and expand their network of who’s doing data science."

LLNL scientist/engineer Laura Kegelmeyer, who founded the National Ignition Facility’s automated optics inspection analysis effort, was a featured speaker. She related how her group has used machine learning since 2007 to detect laser damage in NIF optics, reduce "false alarms" when reporting damage and improve the efficiency of the optics recycle loop. In the past several years, LLNL researchers have been able to automatically classify 12 types of optics damage with greater than 98 percent accuracy and provided a quality control application to detect "remnant damage" that is often tedious and difficult to detect for human operators. These advances have helped allow the schedule of NIF laser shots to occur at a faster pace, she said, up to 400 shots per year.

"So far we’ve had really good results," Kegelmeyer said. "The automation of the repair process saved the human labor-intensive part of that cleanroom laboratory work, and the machine learning informs the optics recycle loop continuously so that we can maintain firing the laser at those super high energies."

LLNL computer scientist Katie Lewis gave the keynote address for the Livermore event, where she spoke about integrating machine learning with simulations of inertial confinement fusion experiments at NIF. Researchers have used machine learning to predict and mitigate against "tangling" and other problems in experiments, and image classification using deep learning to determine if target capsules are in good condition, with better accuracy than a human is capable of, Lewis said. 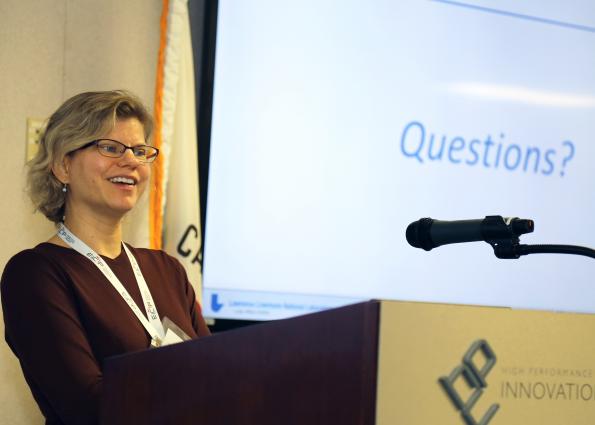 "Now with machine learning we see a lot of possibilities for improvement in the scientific computing realm," Lewis said. "We’re trying to enforce physical constraints and take into account experimental data, and it’s essential for validating our predictions. This ability to explain the results of machine learning and translate them into physics understanding is an important area of research. This is where we want to go."

In the afternoon, attendees met with speakers and experienced LLNL staff members for speed mentoring sessions, discussing career development, networking, preparing for interviews and other topics in 10‐minute time slots before rotating to other mentors.

"The idea is to have the mentee, people who are early in their careers and looking for guidance, the opportunity to talk one-on-one with a career researcher and learn about their perspective," said LLNL computer scientist Maya Gokhale, who was filling in for mentorship organizer Amanda Minnich. "It gives them a contact, so they know someone to reach out to. The mentees get to see a number of different mentors and this gives them a larger pool of people to turn to in their professional life as they go forward. It’s so important. It’s really vital."

After the mentoring sessions, LLNL statistician Giuliana Pallotta and computational biologist Felice Lightstone joined a career panel with computational biologist Sylvia Crivelli of Lawrence Berkeley National Laboratory (LBNL). The panel answered questions from moderator and Lab bioinformatics software engineer Masha Aseeva on challenges specific to women in science, ways to improve job skills and how to deal with "imposter syndrome," and offered suggestions to women who are just starting their careers.

"Find your passion and then go for it," Lightstone said. "Make sure you are always working on one aspect or another of your career because you’re the only person who really cares about it. A lot of people can help you, but you have to direct yourself. Go out and ask and try and persevere, that’s the key."

Other speakers at the Livermore event included Jina Lee of Sandia National Laboratories, who spoke about identifying cryptographic functions; Raquel Prado of the University of California, Santa Cruz (UCSC), who spoke about brain data statistical models; and Xiaoyuan Yang of The Climate Corporation, who spoke about farmer data predictive models.