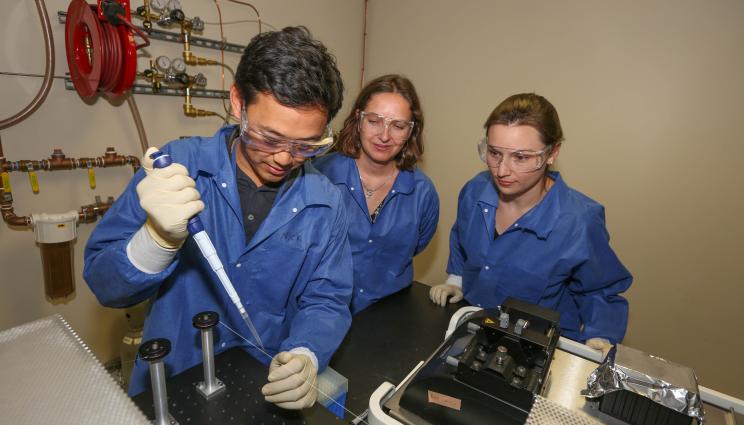 Biologist Nick Hum loads samples onto the Lab’s biological Accelerator Mass Spectrometer (AMS). Each sample passes through the AMS to be analyzed for extremely sensitive measurements of carbon-14-labeled molecules. Looking on are fellow biologists and team members Gaby Loots (center) and Kelly Martin. The researchers have developed a way to determine how many cancer cells it takes to initiate a tumor in another part of the body. Photo by Julie Russell/LLNL

For the first time, researchers have developed a way to determine how many cancer cells it takes to initiate a tumor in another part of the body.

The findings, made by a team of Lawrence Livermore National Laboratory (LLNL) scientists, are published in the journal, Scientific Reports.

"We think this is an exciting area of research," said LLNL biologist Nicholas Hum, the paper’s lead author. "It utilizes a number of LLNL capabilities, including our ultra-precision accelerator mass spectrometry (AMS) technology and our biomedical expertise."

"Our team believes that if major progress could be made to curb metastatic cancer, that it could possibly be an important step toward someday defeating cancer," Loots said.

The Livermore scientists have been studying how cancer spreads through the body, using the Lab’s AMS technology and mouse models with cancer, for the past three years through a grant from the National Institutes of Health.

In their paper, the Livermore team wrote that, "While a large fraction of primary tumors can be treated if detected early, metastatic cancer is generally incurable and accounts for the majority of cancer-related deaths.

"Virtually all cancers can metastasize and common metastatic sites include bone, liver and lung. Understanding the molecular and biological basis of metastasis is essential for conquering it, however, there are very few precise tools that allow us to study the process of metastasis," they added.

This is where the Livermore researchers are assisted by the extreme sensitivity of the Laboratory’s AMS technology, which can detect one single cancer cell among 1 million non-cancer cells.

"What makes our study unique is that we’re able to quantify the number of colonized cancer cells that initiate a metastatic tumor," Hum said.

In effect, most of the common metastatic cancers were initiated by a range of hundreds to thousands of colonizing cancer cells.

"However, what was striking was that we found metastatic bone tumors that were initiated by as few as three cancer cells," Loots said.

Biological AMS is a technique in which carbon-14 is used as a tag to study, with extreme precision and sensitivity, complex biological processes, such as cancer, molecular damage, drug and toxin behavior, nutrition and other areas.

Loots and her team envision future experiments that could someday aid cancer patients by helping to personalize their treatments and could yield insights into the metastatic potential of early stage primary tumors.

"In the future, you could take a biopsy of a recently diagnosed cancer patient, label it with carbon-14, use the mouse model and then seek to determine how aggressive the cancer cells are behaving. In turn, this information could help clinicians in developing personalized treatments that are likely to eradicate tumors in the patients," she said.

Other experiments could make use of the long half-life, about 5,730 years, of carbon-14.  (A half-life of a material means that after a certain number of years, only half of the original amount would be present).

This long half-life would allow the researchers to better understand how and why some cancer cells lie dormant in tissue for years, while other cancer cells become active much more rapidly.

Another team member, biologist and Livermore Graduate Scholar Kelly Martin, noted that with LLNL’s single cell sequencing capabilities, the team can now determine the molecular signatures of the metastasized cells.

"This development could help us better understand the differences between cells of the primary tumor and those that have metastasized," she said.

In addition to Hum, Loots and Martin, other members of the Livermore team are biologist Mike Malfatti, Bruce Buchholz, a physicist with the Lab’s Center for Accelerator Mass Spectrometry (CAMS), and Kurt Haack, a CAMS sample technician.